A friendship reconnected at DLIFLC

“You started 50 years ago last week,” Jerry Spivey said to Vincent “Vinnie” Zinck who was sitting across a classroom full of students at the Defense Language Institute Foreign Language Center Jan. 14, “and I started September or October of ‘68.”

Despite both attending the then Defense Language Institute West Coast Branch at the same time during the late 1960s, the two didn’t meet until they were stationed in Taiwan during the Vietnam War. 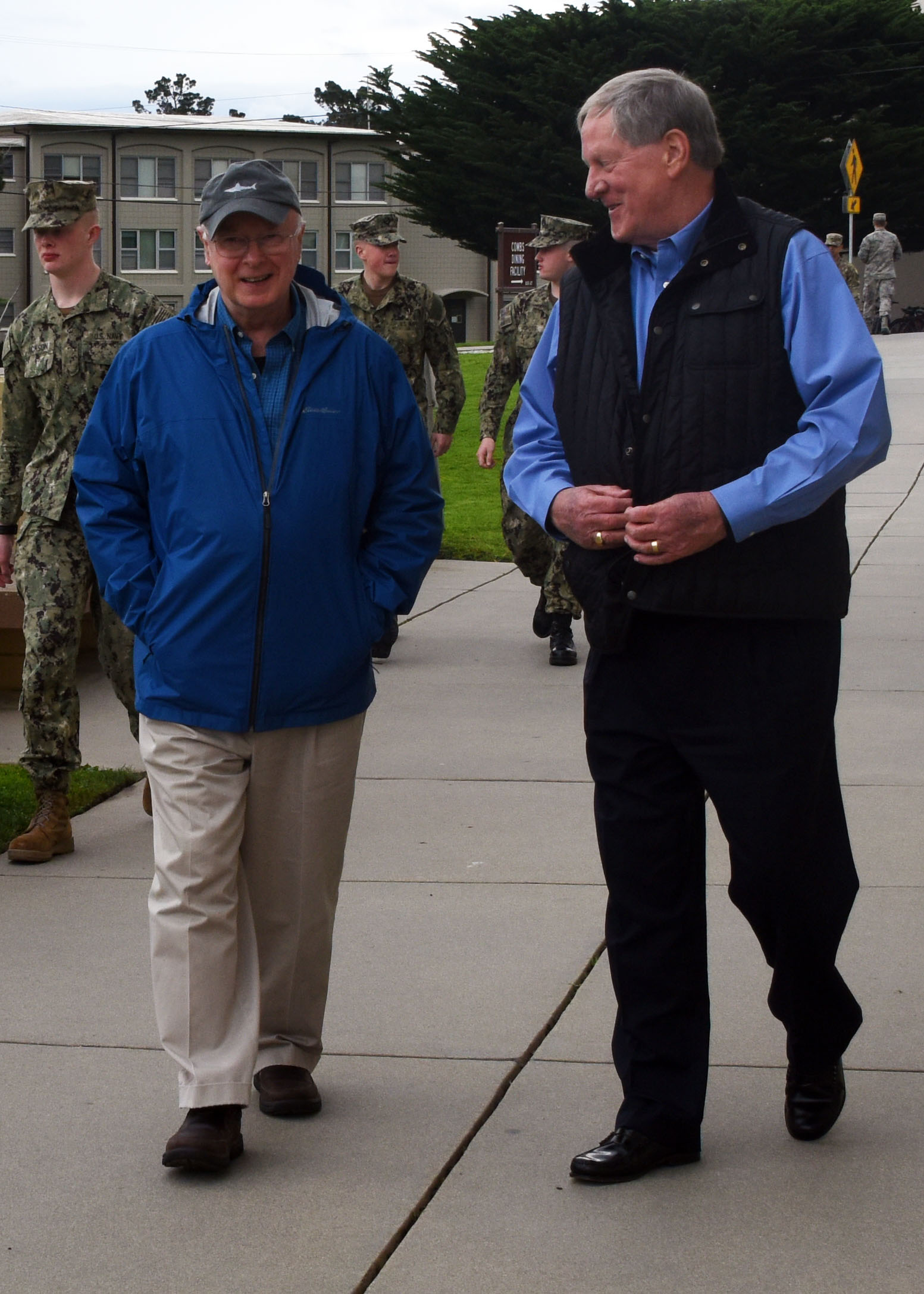 Vinnie Zinck (left) and Jerry Spivey walk around DLIFLC to see how much the Presidio of Monterey has changed in the last 50 years.

“We lived in the same neighborhood in Taiwan right outside of Taipei. We just reconnected on a new thing called Facebook,” explained Jerry, a native of Georgia. The two had lost touch after going their separate ways, only to reunite, first on Facebook and then face to face in San Francisco where Vinnie and his wife live, over 40 years later.

The pair decided they wanted to revisit their days at DLIFLC, the foundation of where their shared past began. The tour started with a visit to the Chinese school, a language they both learned when they joined.

“Most of us who had graduated from college were afraid of getting drafted and getting sent to Vietnam in the infantry. So we figured the odds were better if we enlisted,” Vinnie explained to the students. “Back in the stone age when Jerry and I were here, there were two courses [for Chinese]. One was 39 weeks and one was 47 weeks. Jerry had the 47 week and I had the 39 week course.”

Now the Chinese course has expanded to 64 weeks. And that isn’t the only thing that has changed since they attended DLIFLC.

“When we came to class, we wore Class A uniforms,” said Vinnie. “We did not wear camos or fatigues, we didn’t march to class. It was very loosey-goosey. It was much more like a school than a military base.”

Jerry was emphatic in his agreement. “Much more like a school.”

Later on as they toured other areas of the Presidio of Monterey, Jerry told a story that encapsulated the difference between then and now. 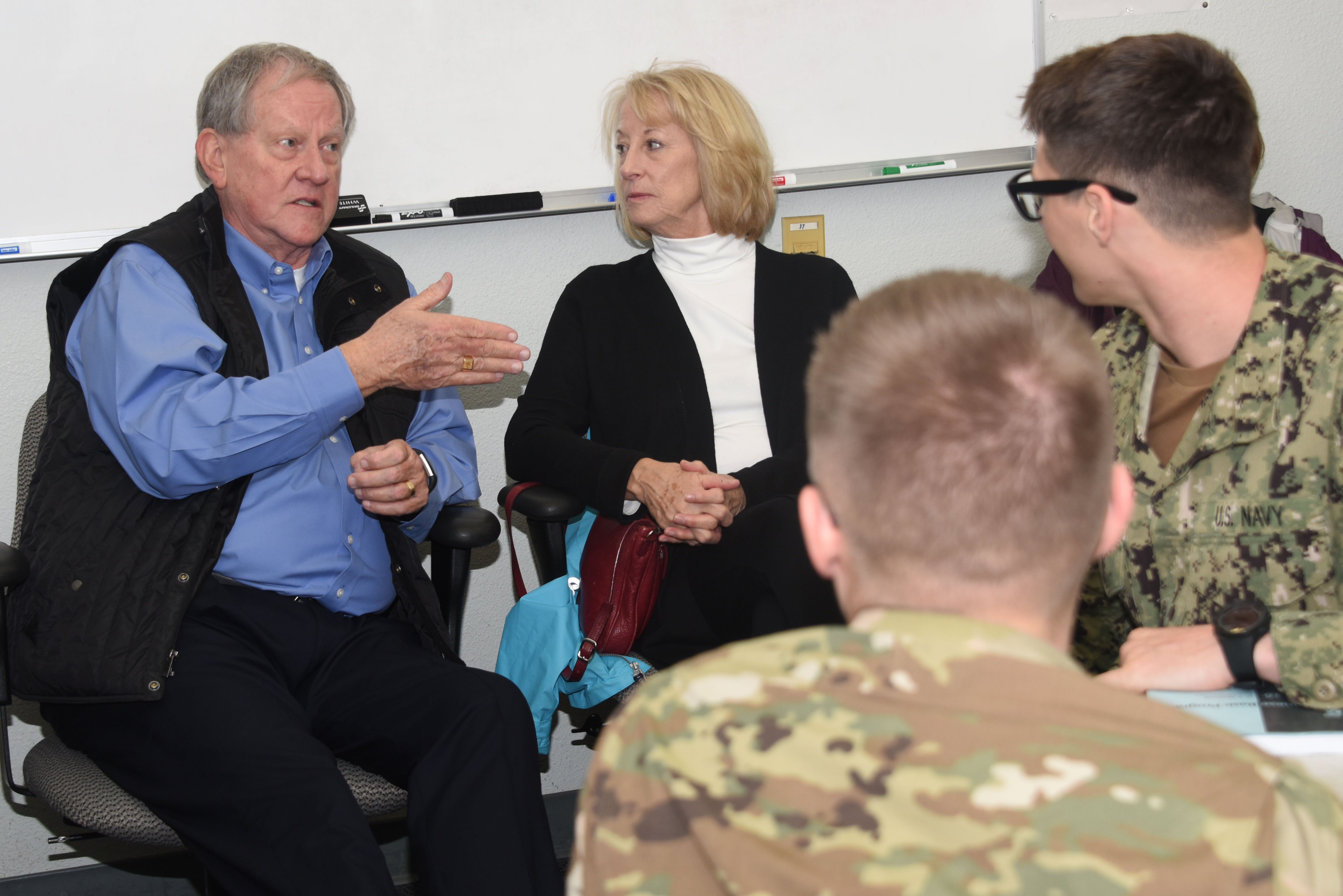 Jerry Spivey (left) and his wife Connie, along with fellow classmate Vinnie Zinck and his wife Liz (not pictured), join in on a Chinese class in progress.

Back to the classroom visit, Vinnie began by speaking in Chinese Mandarin to the students before switching over to English. “When I got out of the Army, I continued my Chinese and got my Master’s degree in East Asian language in literature at Indiana University…after that I got my MBA in finance and started working for Chase Manhattan Bank in New York. They sent me to Hong Kong, which was supposed to be for six months and I ended up being there for 10 years.”

After returning to the States, Vinnie spent the next 12 years traveling back and forth between New York and Asia. It was a major shift of focus, considering that before he joined the military, Vinnie had no idea he had a propensity for foreign languages.

“Every night [at DLI] we had to memorize a conversation. And the first hour every morning we would pair off…and repeat the conversation from memory. Obviously as the course went on, the conversations went longer and longer and longer. But that’s really what I felt built up the fluency because you didn’t have to think about that translation process in your head. From the very first day, you heard yourself speaking the language.” It was a trick he used as he went on to learn Italian and Japanese.

Jerry, who returned to Georgia after his military service, hadn’t lost as much of his Chinese as he’d thought.

“I mean, I caught a whole lot more words than I thought I would remember just in listening to the conversation [in the classroom]. I need the context of the conversation, but I was more of a listener. That’s what we did overseas.”

Their visit had a dual purpose – not only did they get to revisit their old stomping grounds, they were able to offer the students hope that the day-to-day grind of the classroom work was worth it. “I hope you guys realize the opportunity,” Vinnie told the service members in the classroom. “Whether you use the Chinese like I did after I left the Army…it’s still something that changed our lives. You guys have a great opportunity.”

Jerry, too, thinks that learning Chinese was a life-changing experience. “DLI remains a unique experience and it being in Monterey doubles the impact.  Although we didn’t have drill sergeants to ‘encourage’ us, our classes back in the late 60’s took seriously our task. The education we received at DLI translated into dedicated work to provide our leaders the very best intelligence on which to base their decisions.”

The common thread running through their lives was DLIFLC and their time in the service. It’s what brought them back in touch again.

“For whatever reason, a New Yorker and a Southerner became friends in Taiwan those many years ago,” said Jerry. “We experienced a 47 year interruption in that friendship. Yet when we saw one another again, the friendship went on never missing a beat.”