History of the Presidio of Monterey

The military has played a vital role on the Monterey Peninsula since the area was “discovered” and claimed for Spain by Sebastian Vizcaino in 1602. Vizcaino named the Monterey Bay, in honor of his benefactor, Gaspar de Zuniga y Acevedo, Conde de (count of) Monterrey, then viceroy of New Spain (Mexico). 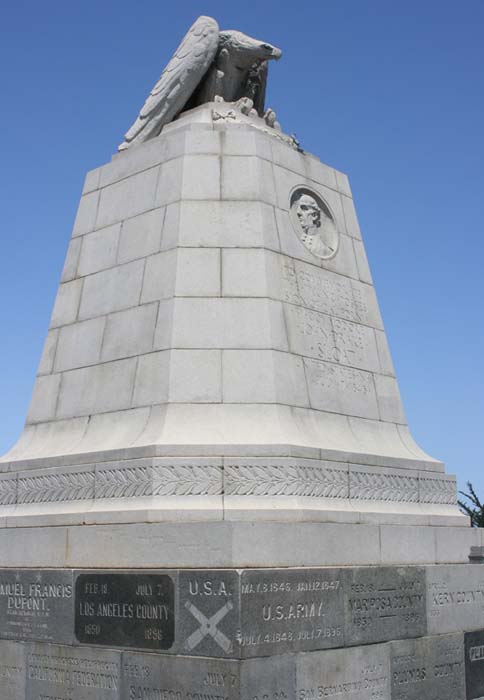 The Monterey Bay area was colonized by a small  Spanish expedition that reached Monterey Bay in May 1770.  Captain Don Gaspar de Portola commanded the military component of this expedition, and Franciscan Father Junipero Serra was in charge of the religious element. Portola officially took possession of Alta (Upper) California for Spain, and Serra celebrated a thanksgiving mass, on June 3, 1770.  Portola established a presidio (fort) and mission at the southern end of Monterey Bay the same day, in accordance with his orders to “erect a fort to occupy and defend the port from attacks by the Russians, who are about to invade us.” Portola’s actions were spurred by the Spanish fear that other nations, particularly Russia had designs upon her New World Empire. Spain moved to occupy that portion of the western American coast that she had previously neglected. The Monterey presidio was one of four presidios and 21 missions established in California. 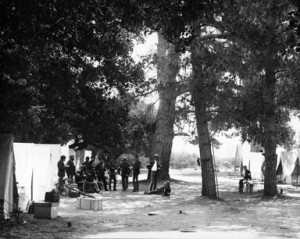 Commodore John Drake Sloat, commanding the U.S. Pacific Squadron, seized Monterey in July 1846, during the Mexican War. He landed unopposed with a small force in Monterey and claimed the territory and the Presidio for the United States. He left a small garrison of Marines and seamen who began improving defenses, near the former El Castillo, to better protect the town and the harbor. The new defenses were named Fort Mervine in honor of Captain William Mervine, who commanded one of the ships in Sloat’s squadron.

Company F, 3rd Artillery Regiment arrived in Monterey in January 1847, and the U.S. Army then assumed from the Navy responsibility for the continuing construction of Fort Mervine. Two of the artillery lieutenants, William Tecumseh Sherman and E.O.C. Ord, plus Engineer Lieutenant Henry W. Halleck, were destined to become prominent generals during the Civil War. 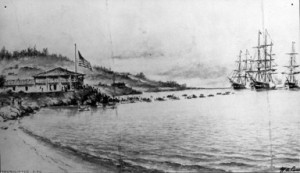 During its early history, this fortification seemed to have many names, including Fort Halleck, Fort Savannah, and the Monterey Redoubt. In 1852, the Monterey Redoubt was renamed the Monterey Ordnance Depot and used until 1856 as a military storehouse. From 1856 to the closing months of the Civil War, the fort, then called Ord Barracks, was abandoned. It was manned again in 1865, and abandoned a second time in 1866, although the U.S. Government “reserved” for possible future use a 140-acre military reservation surrounding the redoubt. 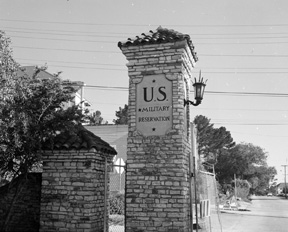 Near the end of the Philippine Insurrection in 1902, the Army recognized it needed additional forts, particularly on the West Coast. As possible sites were being surveyed, the Army “discovered” that it already owned a large area in Monterey that would be suitable for a military post. In July 1902, the Army announced plans to build a cantonment area and station one infantry regiment at Monterey. The 15th Infantry Regiment, which had fought in China and the Philippines, arrived in Monterey in September 1902 and began building the cantonment area. Under the direction of Captain E.H. Plummer, quartermaster of the 10th Infantry, the 15th began construction of wooden buildings to house the regiment. 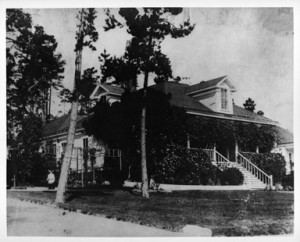 Many of these are still in use today. First to be erected were the barracks, still recognizable by their open verandas running the length of the buildings. Then came the quartermaster’s building, the commissary, the hospital and the officers quarters. The 1st Squadron, 9th Cavalry, “Buffalo Soldiers,” arrived shortly thereafter.

In 1903, the troops moved into the new wooden barracks, allowing the old camp-grounds to  be cleared as a parade ground. 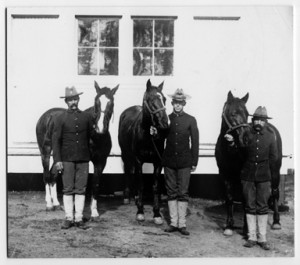 city’s earthquake and fire. It returned to Monterey and remained there until 1909 when it was replaced by the 12th Infantry, joined in 1914 by the 1st Cavalry. The Army school of musketry, the forerunner of the Infantry School, operated at the Presidio of Monterey from 1907 to 1913. In 1917, the U.S. War Department purchased a nearby parcel of 15,609.5 acres of land, called the Gigling Reservation, to use as training areas for Presidio of Monterey troops. This post, supplemented by additional acreage, was renamed Fort Ord on Aug. 15, 1940. 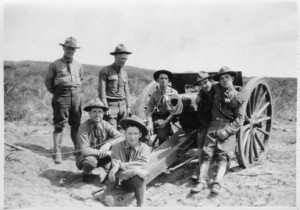 Between the two world wars, the post was garrisoned by the 11TH U.S. Cavalry, posted at the Presidio from 1919 to 1940, and the 2nd Battalion, 76TH Field Artillery, from 1922 to 1940. This period speaks more of maneuvers, horse shows, and parade than skirmishes and campaigns. Holding themselves in readiness for a war that never came, they drilled at Gigling Reservation, riding to and from the area along Del Monte Beach. During the summer months, Presidio soldiers organized and led Civilian Conservation Corps (CCC), Citizens’ Military Training Corps (CMTC), and Reserve Officer Training Corps (ROTC) camps in the local area. 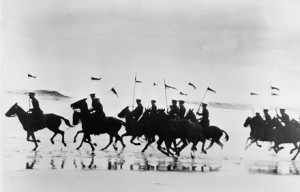 Some older area residents still recall taking the horse trolley out to the Presidio to see the parades on Soldier Field. Many young Monterey and Pacific Grove boys learned to ride horses by helping the troopers exercise their mounts. In 1940, the Presidio became the temporary headquarters of the III Corps, and served as a reception center until 1944.  Declared inactive in late 1944, the Presidio was reopened in 1945 and served as a  Civil Affairs Staging and Holding Area (CASA) for civil affairs soldiers preparing for the occupation of Japan. 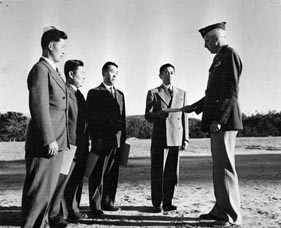 The Defense Language Institute traces its roots to the eve of America’s entry into World War II, when the U.S. Army established the Fourth U.S. Army Intelligence School at the Presidio of San Francisco to teach the Japanese language. Classes at the secret school began November 1, 1941, with four instructors and 60 students in an abandoned airplane hangar at Crissy Field. The students were mostly second-generation Japanese-Americans (Nisei) from the West Coast. Nisei Hall is named in honor of these earliest students, whose heroism is portrayed in the Institute’s Yankee Samurai exhibit. The headquarters building and academic library bear the names of our first commandant, Colonel Kai E. Rasmussen, and the director of academic training, John F. Aiso.

During the war the Military Intelligence Service Language School (MISLS), as 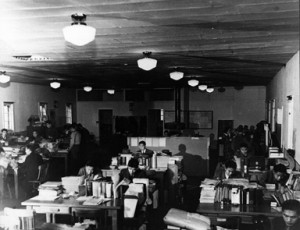 it came to be called, grew dramatically. When Japanese-Americans on the West Coast were moved into internment camps in 1942, the school moved to temporary quarters at Camp Savage, Minnesota. By 1944 the school had outgrown these facilities and moved to nearby Fort Snelling. More than 6,000 graduates served throughout the Pacific Theater during the war and the subsequent occupation of Japan. Three academic buildings are named for Nisei graduates who fell in action: George Nakamura, Frank Hachiya, and Y. “Terry” Mizutari.

The book Nisei Linguists, a comprehensive account of the Institute’s WWII history, can be downloaded by clicking on this link. Nisei Linguists was written by former DLIFLC Command Historian Dr. James McNaughton and published by the U.S. Army Center of Military History in 2006. 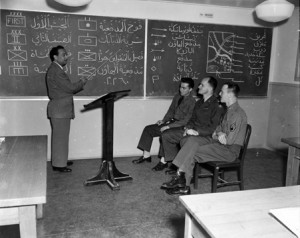 In 1946 the school moved to historic Monterey.  Nobel laureate John Steinbeck captured the spirit of Monterey during this period in his novels Tortilla Flat (1935) and Cannery Row (1945).

At the Presidio of Monterey, the renamed Army Language School expanded rapidly in 1947–48 to meet the requirements of America’s global commitments during the Cold War. Instructors, including native speakers of more than thirty languages and dialects, were recruited from all over the world. Russian became the largest language program, followed by Chinese, Korean, and German. After the Korean War (1950–53), the school developed a national reputation for excellence in foreign language education. The Army Language School led the way with the audio-lingual method and the application of educational technology such as the language laboratory. 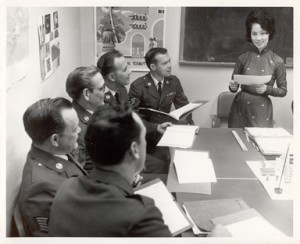 In 1970, DLIFLC Commandant Kibbey M. Horne, a U.S. Army colonel who also held a Ph.D. in linguistics and had a love for history, penned a short pamphlet to describe two centuries of Spanish, Mexican, and American military presence in Monterey.  The pamphlet followed Horne’s efforts to open the U.S. Army’s Presidio of Monterey Museum in 1968, which operated on the lower Presidio until the closure Fort Ord in the early 1990s.

Horne’s original pamphlet has stood the test of time and remains a useful primer.  Horne covers those essential events that any historically minded person needs to know to understand the role that the “Presidios” of Monterey have played in the development of California. 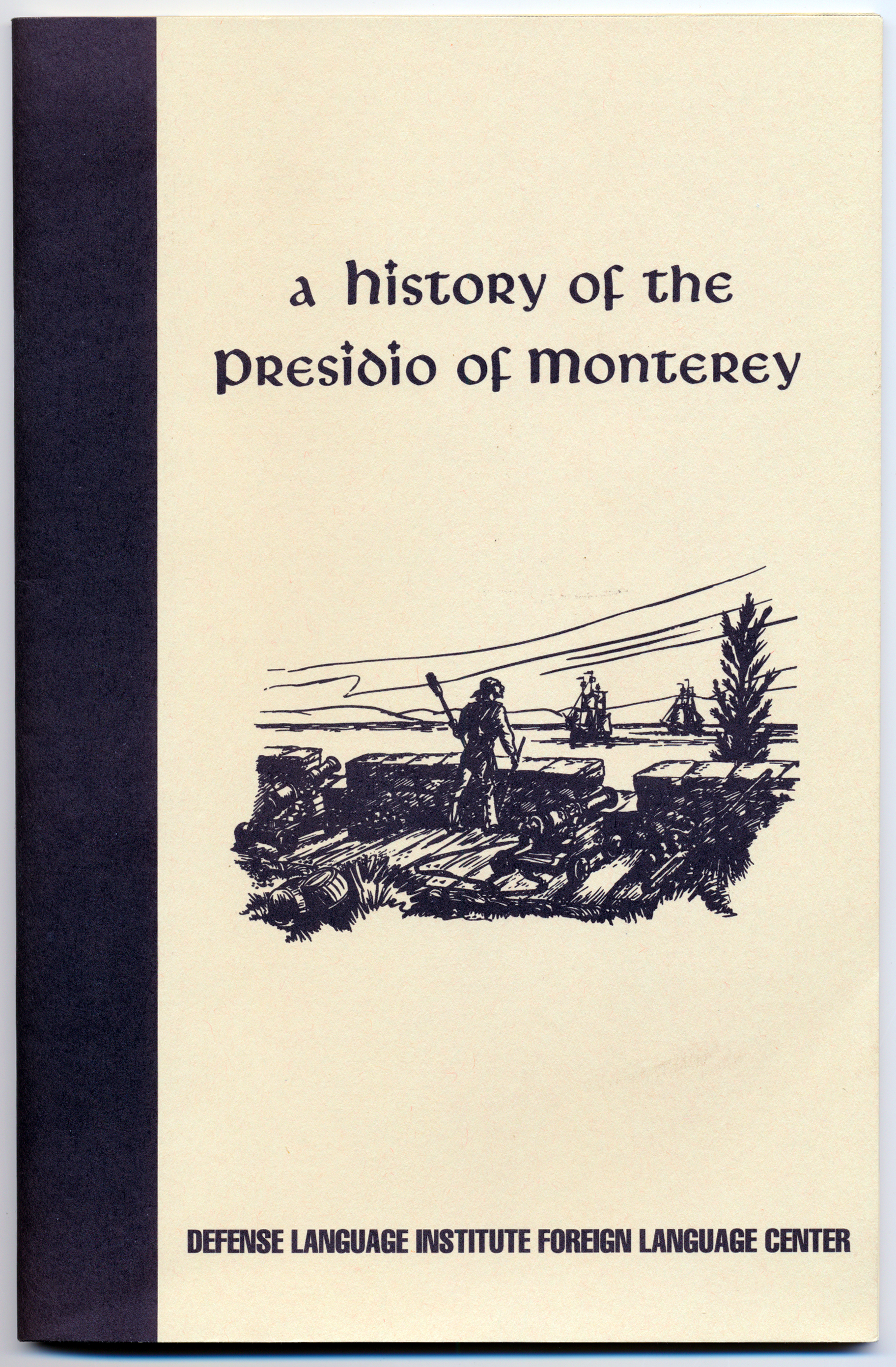