Be careful what you wish for

Be careful what you wish for if you’re a Defense Language Institute Foreign Language Center graduate! You could easily end up catapulted into a world crisis where leaders are clinging to your every word, making crucial national security decisions based upon the information you provide them.

Such is the story of three Persian Farsi language graduates who in the summer of 1978 found themselves working on one of the most historically important political turning points in the Middle East – the Iranian Revolution.

Thomas Chesno speaks with Persian Farsi linguist, telling them about his experience of working for the government and managing linguists during the Iranian Revolution and hostage crisis in 1979.

“We had zero idea what we were going to do when we showed up for work…Coming out of the Persian Farsi program [at DLIFLC] we thought we knew it all, but — we knew nothing,” said Michael Ruhm, to large a group of multi-service Persian Farsi linguists.

Along with his two former classmates, Donald Huntington and Michael Sherman, and former boss Thomas Chesno, Ruhm visited the Persian Farsi School Feb. 21, at the Presidio of Monterey, as part of an alumni reunion, incidentally coinciding with the 40th anniversary of the Iranian Revolution.

“We went from knowing nothing…to the White House situation room calling and saying, ‘Hey, what’s going on?’ And we had to fall back on what we learned in Monterey,” Ruhm explained, remembering that he had received an urgent call at 7 a.m. to come to work after a long night out on the town.

The political situation in Iran spiraled out of control and a religious revolutionary anti-Western group, led by Shia clerk Ayatollah Khomeini, overthrew the 2,500 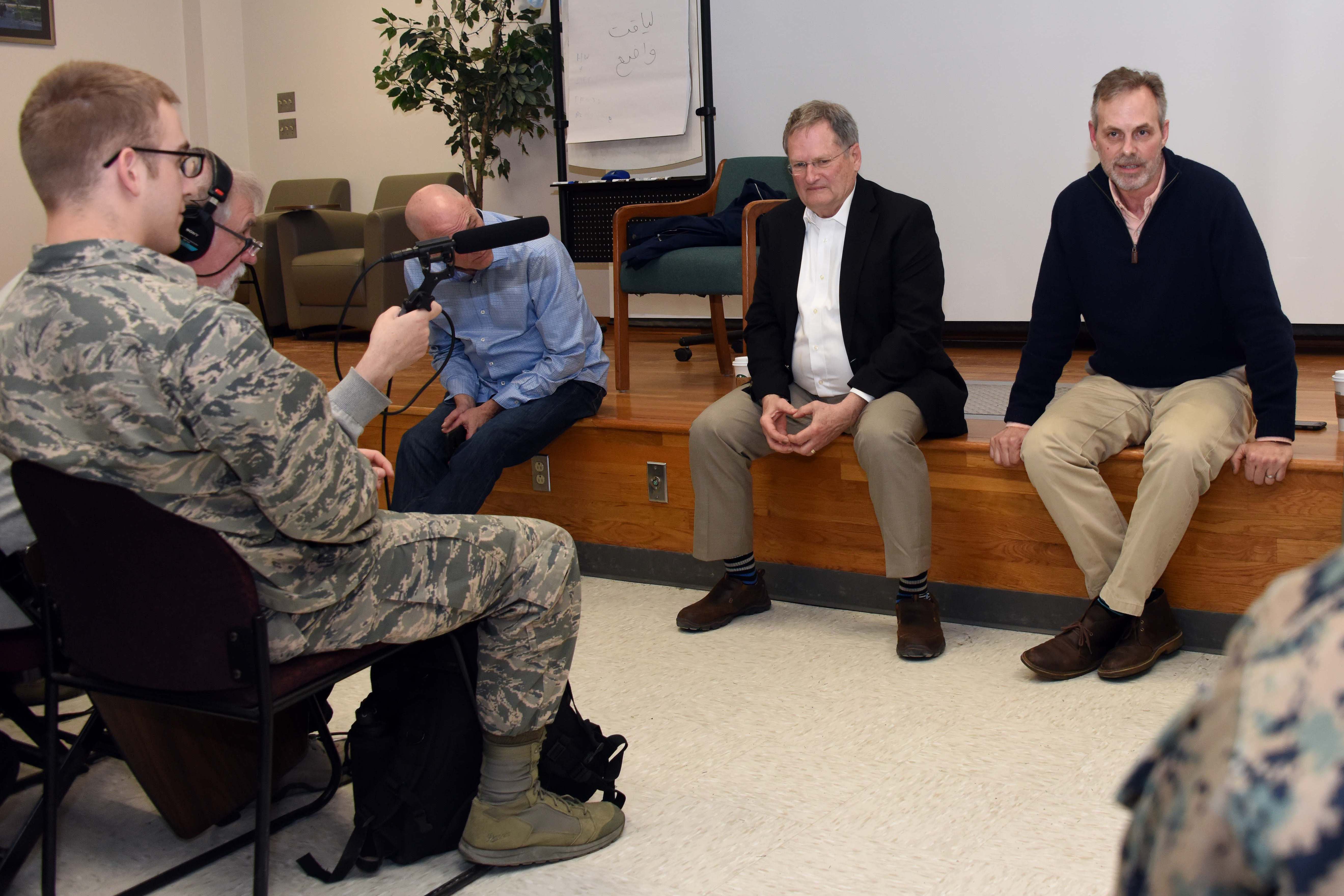 Michael Ruhm, an Air Force Persian Farsi language graduate, went on to serve in the Persian Gulf aboard the USS La Salle and was “crossdecked” to several other ships during the U.S. hostage crisis in Iran in 1979. He spent 238 consecutive days at sea during this period.

year-old monarchy. With growing distrust toward the U.S., in November 1979 the American Embassy was stormed and 52 Americans were taken hostage. Their ordeal would last 444 days.

Just four days after receiving the call, Ruhm found himself aboard the USS La Salle, where he would take a helicopter every day to fly up the Persian Gulf, closer to Iranian flight space to pick up more communications about the hostage crisis.

“In 1979, things were extremely in disarray in Iran,” said Chesno, telling students that as supervisor he not only dealt with the intricate details of the crisis, but was also charged with the wellbeing of his assigned Airmen.

“Michael [Ruhm] was asked to fly each day,” said Chesno, recounting how he went to the Air Force to ask them for flight pay. “And they said ‘He is not flight qualified, so he can’t have flight pay.’ And I said, ‘But he is flying every day,’ and they said, ‘No, he is not!’” The room of students rolled with laughter.

After being told he would spend three to six weeks on a ship, Ruhm was moved from ship to ship as one of the most qualified linguists available, spending a total of 238 days at sea.

“Every time the La Salle pulled into [a port in] Bahrain they said ‘Oh, no you don’t!’ and I saw no land, not once,” explained Ruhm adding that there was a special system for “cross-decking” him, or moving him from ship to ship. “They pulled you on a cable and chair, sometimes underwater….”

While Ruhm’s classmates went back to their normal lives after enlistment, Ruhm continued working for the government for the next 34 years, 32 of which were spent outside the United States. 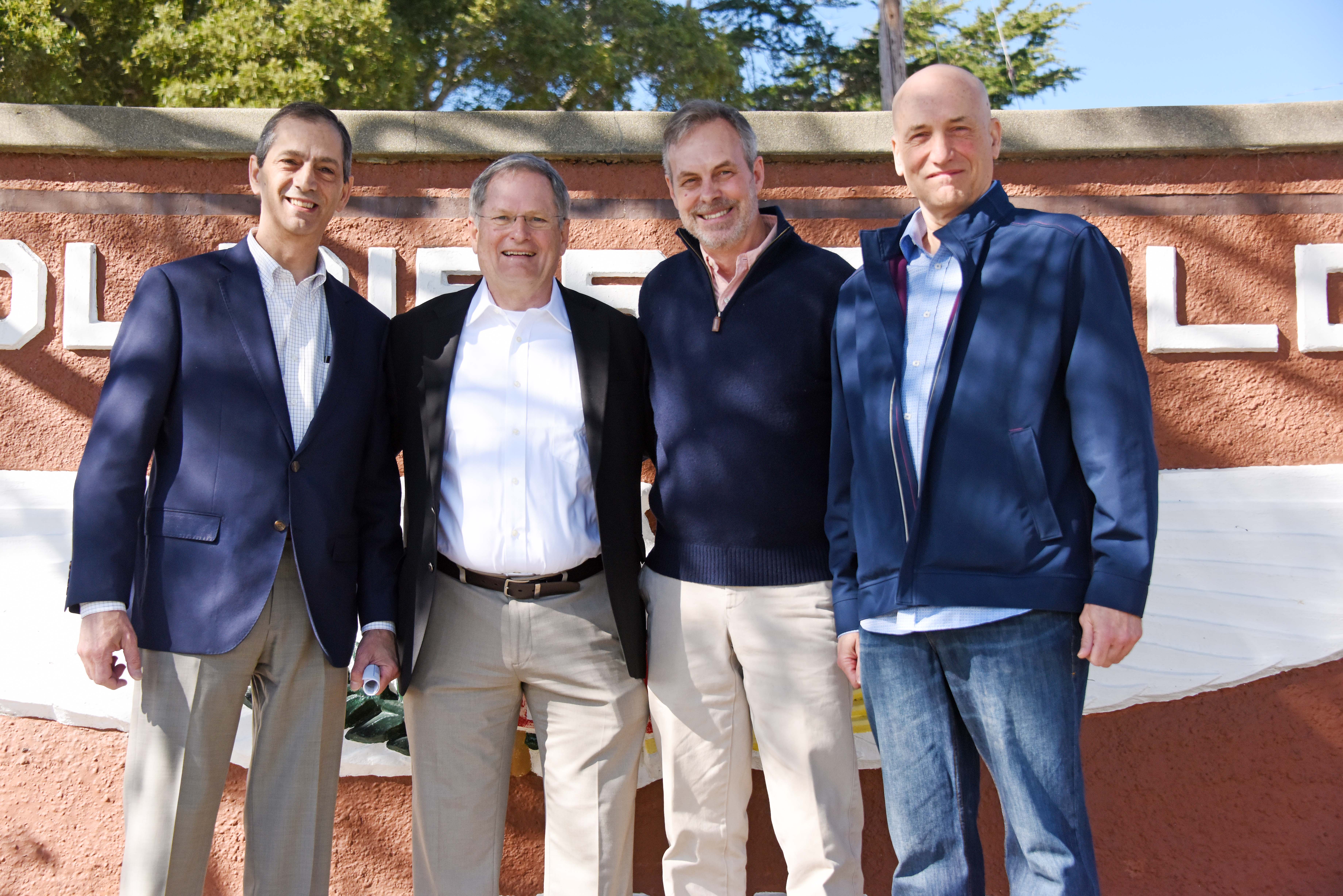 “You just don’t know when you are going to get the next phone call and where it will take you,” Chesno told the students, advising them to learn not only the language and vocabulary, but also understand the culture. “Your training will never ever stop…you need to know what the words look like when they are abbreviated or cut short in a conversation…”

As for Ruhm, his career took him to dozens of countries and he learned at least six more languages.

“I had the opportunity to visit such garden spots as Somalia, Pakistan, Iraq, Lebanon, Tunisia, Kuwait, El Salvador,” he said. “And each time I got the call, I said ‘sure, how much worse can it be?’”

For a guy who played in a rock band and had a part time chimney sweep job at 19, Ruhm says that learning Persian Farsi took him a long way. “Farsi is my first love and I still think it is the most beautiful language spoken out there.”