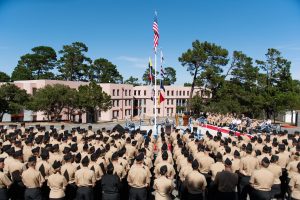 The area is now formally known as the “Kent Navy Yard,” a small portion of the Presidio of Monterey and Defense Language Institute Foreign Language Center (DLIFLC), which includes a number of Navy barracks buildings. A boulder with a bronze plaque was placed in front of the stage to permanently memorialize Kent, who was herself a graduate of the DLI.

In November 2018, Kent deployed to Syria as part of a highly skilled, multi-disciplined armed forces task force involved in critical and demanding intelligence work. Kent was killed in action by an improvised explosive device detonated by a suicide bomber in the city of Manbij, Jan. 16, 2019.

“Today, we have the privilege of honoring Senior Chief Shannon Kent for her inspiring leadership, steadfast dedication, and ultimate sacrifice to the nation and Navy,” said Cmdr. Michael Salehi, commanding officer of IWTC Monterey, in his opening remarks. “From this day on, every Sailor that walks the decks of Information Warfare Training Command Monterey and the Defense Language Institute will remember her sacrifices as a Sailor, and also as a wife, mother, daughter, sister, and friend.”

The decision to dedicate the Navy Yard to Kent came very shortly after news of her death was announced.

“It was a no-brainer,” said Master Chief Cryptologic Technician (Interpretive) Christopher Stevens, IWTC Monterey’s senior enlisted leader. “She was one of us. She began her career here and she exemplified everything we expect of our students and more. Now she will continue to be a role model for all future generations of Navy linguists.”

Senior Chief Cryptologic Technician (Interpretive) Scott Welker was the guest speaker for the ceremony. While his speech did include details from Kent’s life and career, the message was for the students in attendance. He described an early interaction with Kent in which he asked her if she wanted to take on a particularly dangerous duty. Her response was simple: “Send me.” This became a refrain to illustrate the selfless sense of duty displayed by Kent throughout her career.

“It is because you do your job with pride, with drive, with positive attitude that fewer and fewer names are added to the walls of the various agencies and commands we support,” said Welker. “Senior Chief Kent knew this well, and seized every opportunity to accept risk and challenge, because it was necessary. If not her, who? ‘Send me.”’

“You will be asked to push your abilities to their limits, and beyond,” Welker continued. “Not for you, but for those who will never know you. This is the legacy into which you are being baptized. This is the legacy of Senior Chief Kent. ‘Send me.”’

Nearly all of the Sailors of IWTC Monterey are students of the DLI, engaged in some of the longest and most mentally challenging training in the Department of Defense. Learning about Kent and realizing how much they share in common with her has been an inspiration to many of them, pushing them to engage with their studies on a deeper level.

“I feel incredibly humbled,” said Seaman Makinna Olmstead. “I want to be the degree of change that she was in the lives of so many. She inspires all of us in the intelligence community to persevere, work hard, and always strive to be the very best.”

The ceremony concluded with the unveiling of the memorial plaque. The names of the team members killed in the Jan. 16 attack, including Kent, were read aloud. Each name 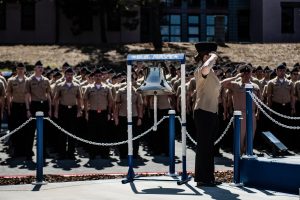 The ceremony concluded with the unveiling of the memorial plaque. The names of the team members killed in the Jan. 16 attack, including Kent, were read aloud. Each name was followed by two bells, a naval tradition to honor and say farewell to fallen shipmates. (Photo by Marcus Fichtl, Presidio of Monterey Public Affairs)

was followed by two bells, a naval tradition to honor and say farewell to fallen shipmates.

Kent is survived by her husband and two young sons.

IWTC Monterey, as part of the Center for Information Warfare Training (CIWT), provides a continuum of foreign language training to Navy personnel, which prepares them to conduct information warfare across the full spectrum of military operations.