Life after a Ph.D.

With fluency in two foreign languages, a Ph.D. in music arts and a possible Officer Training School appointment in his future, you might think that Airman 1st Class Toan Tran likes to learn.

You and his mother would be right. 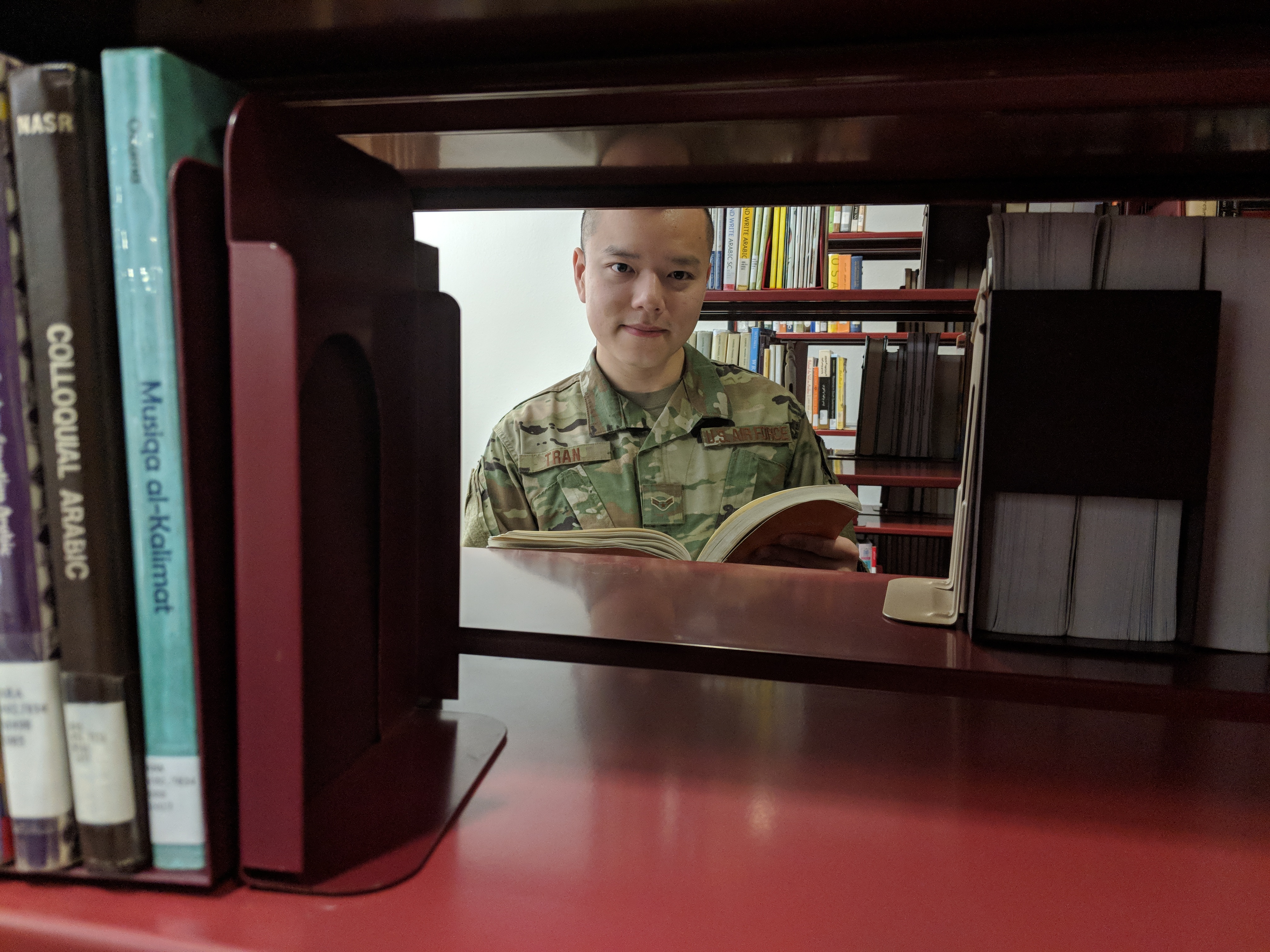 Airman 1st Class Toan Tran studies Arabic while at the Aiso Library on the Presidio of Monterey.

“I think I do like learning. It’s always been a comfort,” he said. It’s what brought him to the Defense Language Institute Foreign Language Center in the first place. After finishing his Ph.D. in music arts, Tran discovered finding work was tougher than he’d thought.

“I was at the end of the doctorate, a terminal degree. There was literally no more school. So I bided my time for as long as I could but the [job] market did not improve. In fact, it got worse. At least in terms of music jobs.”

Fortunately, he had a high school friend who directed him toward becoming a linguist with the Air Force.

“DLI really peaked my interest,” explained Tran. “It seemed so impossible for them to teach you to be functional in a language in a year and a half and expect you to go out there with work that could have actual implication in people’s lives and national security.”

A Ph.D. is one of the highest degrees you can get. And then he joined the military to go to one of the longest training tracks offered. All told, civilian college included, Tran will have been in school for more than 10 years by the time he gets to his first duty station.

On top of his Ph.D., Tran also had another thing in his favor – he already knew a second language. His fluency came from being a first generation Vietnamese. But, as he explained, knowing a second language was some help but not as much as you’d think.

“It’s always in the back of my mind that there are other ways to make a sentence structure or syntax… To be honest, with how fast the classes move here, I don’t think it was very much of an advantage,” Tran said.

And, while having a Ph.D. is a good thing, it didn’t mean he felt like he conquered the course.

“Honestly, even with the good scores I got, I feel like I survived,” Tran said ruefully. “That in itself is a way bigger accomplishment than I ever would have thought (possible) walking in to this place. I had a Ph.D. I thought if there was anything I know how to do, it’s how to learn. I’m a professional student in every way. But honestly, the pace of the course was more than I could have prepared for.”

After successfully completing his Arabic course in December, Tran is now waiting to hear whether he will be selected to go to OTS. In the meantime, he keeps up with his new language by tutoring the new students and helping around the Middle East schoolhouse. He said it lets him remain immersed in the language without the stress of homework and tests.

As a life-long learner, Tran had this to say to upcoming students who might feel overwhelmed by the sheer amount of work necessary to learn a language in such a short time:

“Trust the system. Sometimes you feel like you know better or like there is no way it could work for you. But DLI has been around for a while and they’ve churned out a huge number of linguists.  If you simply trust in the system and grin and bear it…you can really get through it.”