One man’s journey to freedom in the United States

The words inscribed at the feet of Lady Liberty, “”Give me your tired, your poor, your huddled masses yearning to breathe free…,” might well have been written with someone like Waseem Abdo in mind. He, along with 24 other applicants, officially became citizens of the United States in a naturalization ceremony held at the Presidio of Monterey March 7.

“Honestly, I feel like I have never been a citizen of any country,” Abdo said from his office at the Defense Language Institute Foreign Language Center where he works as an Arabic language instructor.

Abdo escaped from Syria in 2011 after being persecuted by the government and experiencing detention and threats to his life. Despite growing up in such a beautiful part of the world, a lot of the regime’s ideals didn’t mesh up with what he inherently believed.

“I’ve always been passionate about freedom and freedom of expression. Back in the day when I tried to do journalism in Syria, I had a lot of difficulty expressing myself because we lived under a dictatorship for a long time,” he said.

Expressing himself led to harassment by the government, especially when he worked as a media advisor for the American Embassy in Syria. 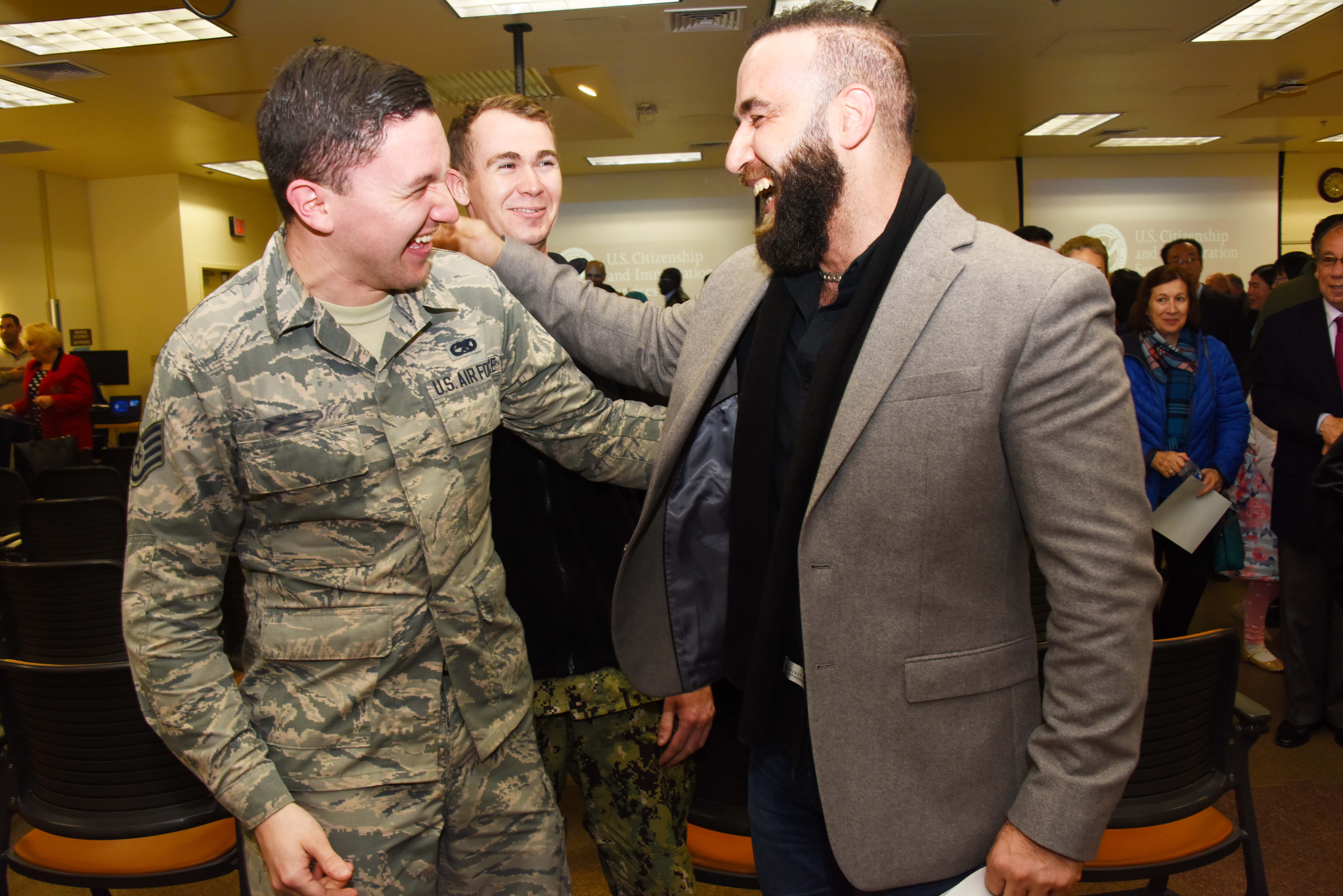 Two of Waseem Abdo’s military students congratulate him after his naturalization ceremony held at DLIFLC March 7, 2019.

“You can’t keep a secret in Syria, so everyone knew about it,” Abdo said. “I got arrested twice for the sole reason of my position at the Embassy. I was tortured.” Thanks to the ambassador at the time who intervened, Abdo was released. “It wasn’t a good idea [for me to stay] because I knew as soon as the Embassy shut down, they would come after me again. So I had to leave.”

In 2011, when the war broke out in Syria, Abdo and his family fled to different parts of the world. Because of his job with the American Embassy, he was able to come the United States, get his green card and apply for asylum.

Abdo has been in the U.S. for eight years. Becoming a naturalized citizen on Thursday was the last step in a long journey.

Three of his students stayed late after class to watch the ceremony and cheer their teacher on.

“He’s one of the smartest individuals I’ve ever met,” Seaman Kiersten Stone said. Speaking for herself and the two other classmates at the ceremony with her, she said, “We are extremely honored to call him a fellow American.”