Tadeusz Haska’s story reads like a movie straight out of Hollywood.

Between his parents’ early deaths, his experiences in World War II Poland and the harrowing escapes he endured, the Defense Language Institute Foreign Language Center instructor’s experiences were all frighteningly true.

Haska writes about them in his own words in a book recently published by his granddaughter, Stefanie Naumann. He began writing his memoirs in the 1990s, after he retired from his 35 years as a Polish educator at DLIFLC, she said, but hadn’t finished them by the time he died in 2012.

“I grew up hearing countless people tell my grandfather that his life story must be recorded,” she wrote. 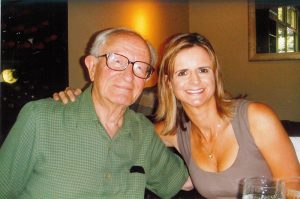 Inspired by him, Naumann set out to finish the work that he began, in his words, a bit reluctantly. “I always wanted to write about my life experiences,” Haska wrote in the book, “but I never had enough time. Now that I have the time, I think it is better to live.” However, his wife, daughter and granddaughter convinced him he needed to write it all down. Between his writing, recordings and the pictures Naumann was able to gather, an extraordinary story began to emerge. The book is called, “How Languages Saved Me: A Polish Story of Survival.”

Haska was born in Poland in 1919, six months after it became an independent country and two days after the Treaty of Versailles was signed. His early childhood was idyllic until his father’s death in 1931 and his mother’s subsequent death one year later. Haska and his brother, Antoni, at 12 and 13 years old, began their school year as orphans.

“Our parents taught us that education is the only thing that could never be taken away from us,” he wrote. Because of their determination to stay together and finish school, the two brother managed on their own until they graduated from the Polish version of high school at 18.

Perhaps it was these years of independence that helped them survive the next traumatic 6 years.

On September 1, 1939, just as Haska was beginning his second year of college with a focus on Slavic languages, Germany bombed Poland. Unable to contact his brother or continue college, Haska managed to get one of the last seats on the last train heading to Warsaw, where he planned to join the Polish Army. That train never made it all the way to Warsaw and was just the beginning of his World War II experiences.

“People often ask me how I survived World War II Poland,” Haska wrote. “The short answer is that I avoided being captured by constantly changing places of living.”

What saved him was his education.

“The most important thing that helped me survive was my knowledge of languages,” he wrote. “I became very good at impersonating Germans.”

During the war, he made use of his knowledge of French by working as a translator, a job that helped him get through the rest of the German occupation. After the war, he helped re-establish the Polish administration in town and at night, he taught Polish language and literature, Latin and French, working 12 to 14 hour days. As an anti-Communist, he quickly realized that Poland wasn’t truly free under the Soviets. He and his wife eventually escaped to America.

By the time Haska moved to New York in the 1950s, he had several more languages to his credit. Two more attempts on his life from Communist sympathizers led Haska to move him, his wife and their young daughter across country to work for the government at a place called the Army Language School in Monterey, California.

“I started the job at the end of April 1951,” he wrote. “Eisenhower was not president yet, but he was campaigning, and he was proclaiming crusade against Communism. All the minorities in the U.S. like the Polish, Czechs, and Hungarians, who were subjugated by Communism, wanted freedom. So, the Army Language School was recruiting instructors for all those eastern European languages and those departments were growing tremendously. Russian was the largest department, but Polish was also becoming very large.” 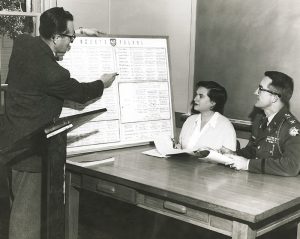 It was in his Polish class in 1967 that Ben De La Selva first met Tadeusz Haska.

“I remember him as a soft-spoken, well-mannered and well-educated professional,” De La Selva, a U.S. Army retiree and former DLI educator, said. “That was typical of the DLI Polish faculty of those years. He often shared interesting stories of his efforts to evade Germans, then Soviets during and after World War II.”

By the time Haska got his Ph.D., while still working at DLIFLC, he knew nine languages.

“The way he taught languages was inspired by how he learned languages himself,” Naumann explained. “When he was trying to learn English desperately in Sweden, this company sent him their records of English. He put it in the player, a Linguaphone, I think it was called. He said it was so difficult, he had no idea what he was saying. He mailed it back and told them this was for an advanced English learner, [that he was] brand new. And they told him he had to listen to it 100 times and check it off each time.” Because it worked for him, she said, he used that method with his own students.

“I got to hear many of his life stories growing up that provided invaluable reference points about what is truly important and right,” Naumann wrote. “My grandparents faced unspeakable adversity and they taught me what the courage of conviction means.”

For more videos and photos of Tadeusz Haska, visit www.stefanienaumann.com