The U.S. Army’s senior defense attaché at the American Embassy in Beijing, China had a few things to share with newly-minted Foreign Area Officers who are attending a week-long joint FAO course hosted by the Defense Language Institute Foreign Language Center Jan. 14-18. 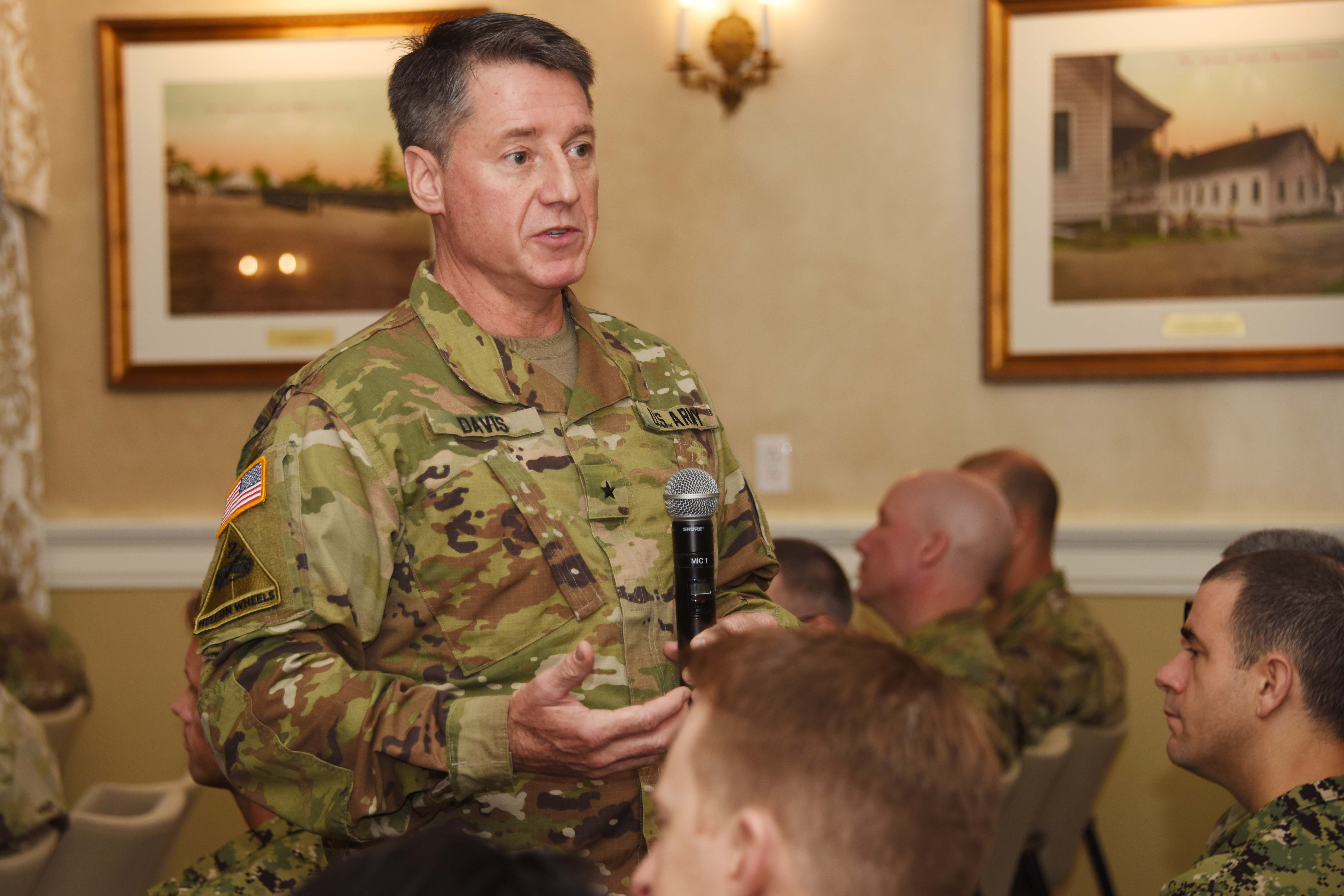 “It is important to understand that what you do now will set the tone for your entire career,” said Brig. Gen. Robert “Brian” Davis, the key note speaker Jan. 15 at the Presidio of Monterey. The event was attended by nearly 150 FAOs from all four branches of the service and their spouses.

The week-long course is designed to offer general orientation to the FAO profession for young captains and majors who just began their new career field. The course consists of workshops with guest lecturers who are experts in the field of foreign affairs and specialize in regional political topics, operations, and security cooperation.

“It is important for you to know where you are in the world, which is completely different than it was 20 years ago,” when the global balance of power was roughly divided into two spheres, between Western democracies and the former communist Soviet Union and Eastern Bloc nations.

Brig. Gen. Davis shares a laugh with his former instructor, Patrick Lin, during his visit to the Asian I school.

“This is a period of increasing risk, of the return of Great Power competition…” he continued, stating that the job of FAOs is even more crucial today with the continuous changing of political and economic alliances.

Davis speaks from 16 years of experience, having served in China, Thailand and Taiwan. He graduated from the Chinese Mandarin Basic course at DLIFLC 23 years ago and surprised his old instructors with his fluency.

“I am amazed at how well he speaks the language,” said Davis’ former instructor Patrick Lin with a broad smile. Lin was Davis’ instructor in the early 1990s.

“He is very, very fluent,” Lin commented, as the brigadier general carried out a swift conversation with students in the classroom during his visit to the schoolhouse a day before the JFAOC began.
At the conference, Davis imparted several pieces of good advice to the multiservice FAOs. “If you remember anything today, it will be ‘networking,’” he said, explaining that the branch of service does not make a difference when stationed abroad at an American Embassy where all staff report to the Ambassador. “Being an FAO is very different than being a staff officer.”

“Leadership skills are built on consensus building. Often times you will find yourself in a situation where you may be supervising someone who is higher than you in rank,” he said, offering that it is better to work together as a team to resolve issues and overcome challenges.

Foreign Area officers and their spouses chat during a break during the conference.

Davis said that one of the most important elements of being an FAO is having a good reputation. “Your reputation is important … build it and maintain it…it will last for a life time,” he said.