They say life happens when you make plans. In the case of Michel Ashi and Marah Al-Masri, life happened when they didn’t make plans.

“We both lived in Los Angeles,” Marah said, Michel next to her at the table. “We never crossed paths. Never met at all.”

That is, they didn’t meet until 2016 when Michel got a job as a teacher at the Defense Language Institute Foreign Language Center, working in the same building as Marah, who is also a foreign language teacher. On Michel’s first day, Marah had just come back from LA after a weekend spent celebrating her birthday and was telling the story to everyone in the room.

“I was listening and I cracked a joke,” Michel said. “She laughed and I felt like ‘Oh she laughs at my jokes so that’s a good sign.’” 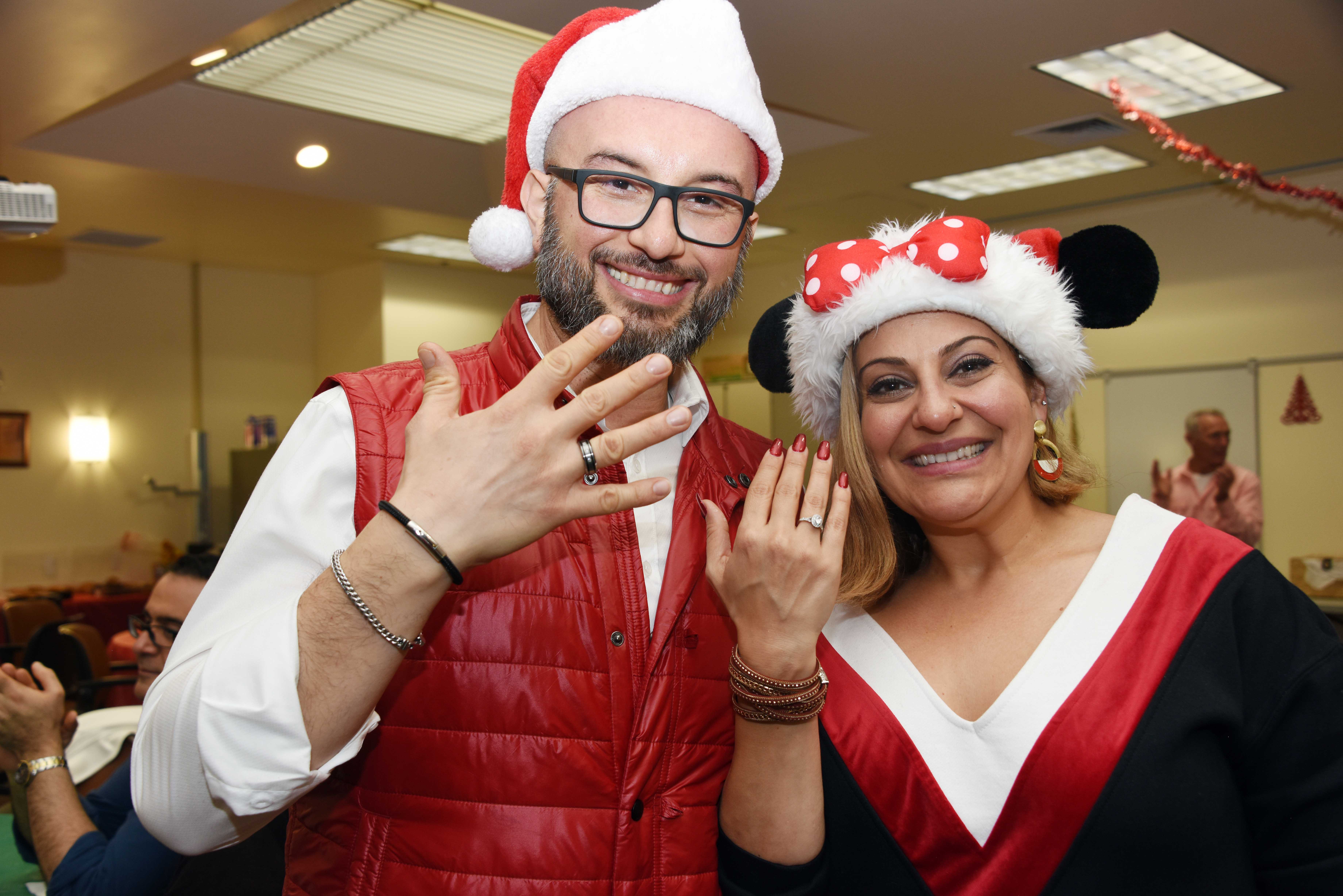 Michel Ashi and Marah Al-Masri proudly show off their engagement rings at a Christmas party at DLI. (Official DOD photo by Natela Cutter)

Marah said, “He cracked joke and I got it. I was the only one who actually laughed in the room.” They both chuckled at the memory. “We hit it off from there. We became close friends.”

With the two of them coming from similar a background – both originally from Syria – they became good friends who weren’t dating each other. In large part because Michel didn’t want to get married.

“I was very stubborn about being a bachelor,” Michel said. “Just because I lived very well. I didn’t care whether I was going to get married or not.”

Fortunately for them both, Michel changed his mind after a year of them getting to know each other. “She was the right girl at the right time in the right place,” he said.

They began dating. In May of 2017, Michel proposed to Marah much to her, and everyone’s, surprise.

“I wasn’t expecting it at all,” she said. 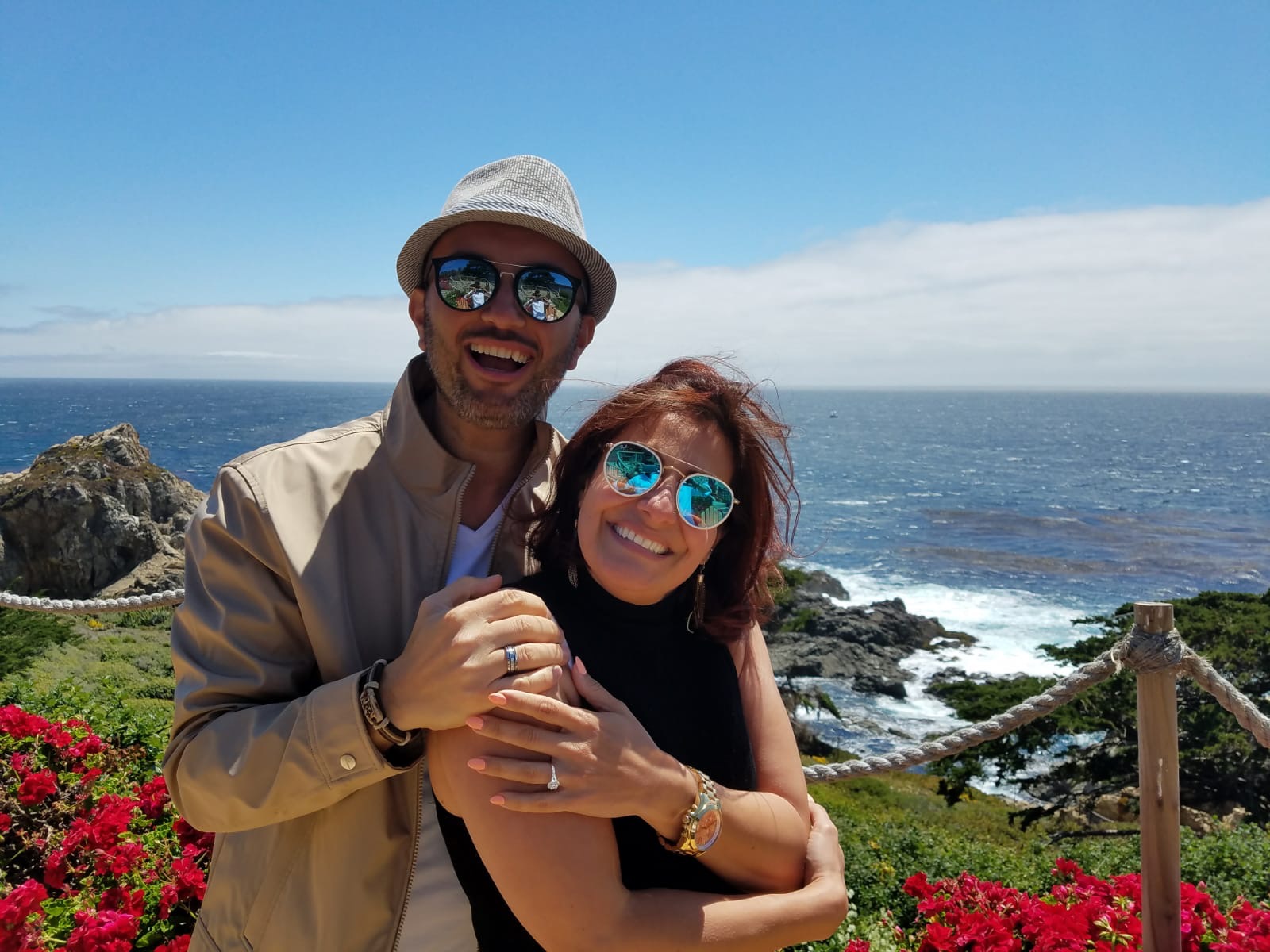 Michel Ashi and Marah Al-Masri, both foreign language instructors at DLIFLC, are all smiles after Michel proposed to Marah in Carmel By The Sea, Calif. (Photo used with permission from Marah Al-Masri)

When they put the proposal video on Facebook, their family and friends were very happy for them, Marah said. “The comment we got was, ‘Well you look cute together. You fit together.’”

Not everyone saw a future for their relationship. It’s unconventional because he is a Christian and she is a Muslim.

Marah said, “It’s a taboo back in Syria. And even here.”

Michel agreed. “It’s a taboo for some conservative families. [Marrying with different religions] is not very common anywhere in any society but specifically in the Middle East.” He continued, “I didn’t think of it much, but I mean, she’s Muslim, I’m Christian, who cares? I don’t care, I hope you don’t,” he said to Marah.

“I mean, we live in America, so let’s be more open,” Michel said.

The wedding will be in LA, where there is a large Syrian community.

“We love Monterey,” Marah said. “It’s beautiful. People fly from everywhere to get married here and take pictures.” But, she explained, because there is such a large Syrian community in southern California, Los Angeles has more Middle Eastern options available to them for the wedding.

They will be inviting friends and family they’ve developed here at DLI to be part of the wedding celebration. Their co-workers didn’t have to push them into a relationship – it just happened naturally – but Marah and Michel are still grateful.

“I don’t think we would have ever met-” said Michel.

“Or come across each other,” added Marah.