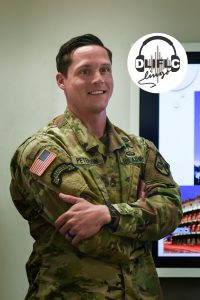 Sgt. 1st Class Matthew Peterson is a two-time graduate from the Defense Language Institute Foreign Language Center in the Pashto basic and intermediate courses. Far from being your standard linguist, Peterson’s determination to do something different with his life led him to work with the 75th Ranger Regiment, headquartered at Fort Benning, Georgia. There, he was able to use his language directly assisting the NATO-led Operation Resolute Support.

This is an edited version of an interview, later made into an episode of the DLIFLC Lingo podcast series “Oh the Places you Can Go (with DLI).” The interview has been edited for clarity and space.

What drove you to become a linguist with the Army?

So, Pashto was the third foreign language that I learned. I was an Asian major in college, focusing on Japanese and Chinese. I also studied linguistic anthropology, so I kind of came in at an advantage. I didn’t know what else to do. They canceled my degree program so I was looking at my options. My father was a retired colonel, so I knew that the option was there. I still wanted to do something with languages, you know that’s a passion of mine. The Army told me I could learn Pashto and that they didn’t need Japanese. So that’s how I ended up in Pashto.

But you didn’t start as a linguist.

I joined the Army in 2008 as a human resources specialist knowing that I wasn’t going to stay there. I couldn’t get a top secret clearance coming in. The Army told me I could get a secret and do this job for now and then after a few years, I could reapply, get a top secret, and then switch over. So that’s essentially what I did.

What made you want to work with the 75th Ranger Regiment?

I just liked that they trained hard. Their SIGINT (Signals Intelligence) group is really small. It’s just one small platoon. I had known the guys before and liked them. We just meshed really well. I knew it was going to be a fun place to work, where I’d be able to do stuff I wouldn’t be able to do anywhere else.

What is one way you were able to use your language?

I showed up at this out station and one of the first things they asked me to do was sort of vet the civilian linguists they had. They had hired a couple of locals to help them monitor radios and just radio chatter in the area. I guess it’s well known that you can get paid per language since there are so many languages spoken in Afghanistan.  A lot of guys will come in and say, “Yeah, I speak Dari, Farsi, Pashto,” and they’ll get paid for each one. But the guys I was working for, they weren’t really confident that these interpreters were doing their job, so they just asked me to not let anyone know that I spoke Pashto and just listen and see. Turns out there was only one guy out of the three who actually spoke Pashto.

For the full story, listen to DLIFLC’s podcast on: www.soundcloud.com/dliflc