“I never thought I would have to organize a traditionally in-person workshop into an online event. I am amazed that it worked out well for everyone, the participants and guest speakers,” said Frank Everson, the DLIFLC lead for the CLPM office and emcee of the event.

The purpose of the ACLPM is to assist and inform language program managers in interpreting new doctrine, identifying innovative developments in managing foreign language professionals and discussing new language learning resources offered to service members in order for them to maintain and enhance their foreign language skills.

The highlight of the event is the announcement of the results of a Department of Defense competition for the best Command Language Program and best Language Professional of the year. “Each service submits their nominee to compete for the DOD CLPoY and their nominee to compete for DOD LPoY. Then, a joint-service E-9 selection panel selects the winners,” explained Everson. 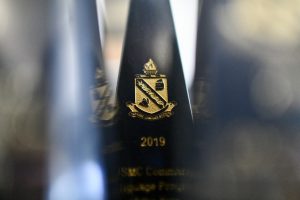 This year, the 2019 awards were announced by Everson online. “I am proud to announce that the 706th Military Intelligence Group from Fort Gordon, Georgia, has won the DOD 2019 Command Language Program of the Year,” he said, while virtual clapping could be heard in the background.

The DOD Language Professional of the Year award was received by Cryptologic Technician Interpretive 1 David Dillon from the Center for Information Warfare Training Detachment, Fort Gordon, Georgia. Though many elements of service are considered for the individual award, Dillon particularly stood out for his high scores in Modern Standard Arabic; Reading 3 and Listening 3+. Dillon also speaks a variety of dialects at that level to include Iraqi, Syrain, Sudanese and Saudi, while he maintains a 2+/3 in Yemeni and Egyptian.

“We all know that linguists are doing amazing things day in and day out. They are empowered, embedded, and invested. With the support of their unit’s command emphasis, they bring a language-enabled lethality to the fight,” said DLIFLC Commandant Col. Gary Hausman, congratulating the winners.

While some technical difficulties did occur in the beginning of the workshop, most of the participants did not appear to be distracted by it. “Technical glitches are commonplace and I do not think they were troublesome for most of us. It happens,” said Elaine Weiner-Reed, the deputy senior language authority for U.S. Cyber Command. “For me personally, the workshop held the right balance of strategic and tactical views and perspective. This workshop charted the course for moving forward, and I like where it is going.”

Most importantly, those new to the CLPM job were able to learn about the ins and outs of their responsibilities in managing linguists across the force. “I appreciate you and your team putting this amazing workshop together for us! It’s one of the best online workshops I have attended,” said Staff Sgt. Yongqin Li, from the 338th Combat Training Squadron at Offutt AFB, Nebraska.

DOD policy states that units which are assigned linguists must establish a command language program and units that have a CLP must have a certified CLPM. The ACLPM workshop provides an opportunity for CLPMs to not only build their networks but also to hear firsthand from key leaders across the DOD about the importance of the CLPM role in boosting mission readiness. The program has received increased attention across the DOD since the passing of the most recent National Defense Authorization Act that directed commanders at all levels to tie language to mission readiness in all DOD readiness reporting systems