The institute’s crest symbolizes the dual heritage of the Defense Language Institute and the Presidio of Monterey.

The upper right corner of the shield depicts a fragment of the Rosetta Stone bearing the name of Egyptian ruler Ptolemy V (203–181 BC) in two languages (ancient Egyptian and Greek) and three scripts (Egyptian hieroglyphic and demotic scripts and Greek capital letters). Its discovery by a French military expedition in 1799 enabled scholars for the first time to decipher this complex pictographic writing from which much of our knowledge of Egypt’s ancient civilization is derived.

The cap on the lower left portion was worn by the San Carlos Catalan Volunteers, Spanish soldiers who accompanied Father Junipero Serra on his Sacred Expedition of 1769–70 to establish a string of missions in Alta California. In 1770, on the site of present-day Monterey, they built a small fort (presidio) to protect the San Carlos Borromeo Mission.

Red and blue reflect the wartime and peacetime missions of the institute, and the green olive branch reflects the aim of promoting peace through understanding. The gold torch on top is a traditional symbol of learning and knowledge. 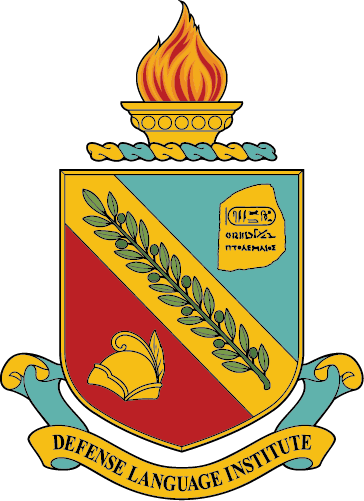