If you were to ask the average service member, chances are they would not equate military classes with a flexible learning system. The military, perhaps by definition, is rigid with rules and regulations. The Hebrew classroom here at the Defense Language Institute Foreign Language Center is very different.

“In Hebrew, every class will basically co-construct their own learning path with the teachers,” said Yaniv Oded, chairperson of the Hebrew department. To illustrate, he pointed out that they use only two textbooks for the classroom. Other language programs, on the other hand, can use upwards of 14 textbooks and over 30 other required books. Oded believes theirs is a very tailored and flexible system that brings success.

“If the students control what they are doing, then they are more engaged. They are happier, they are less stressed,” Oded said. Sometimes being in control and 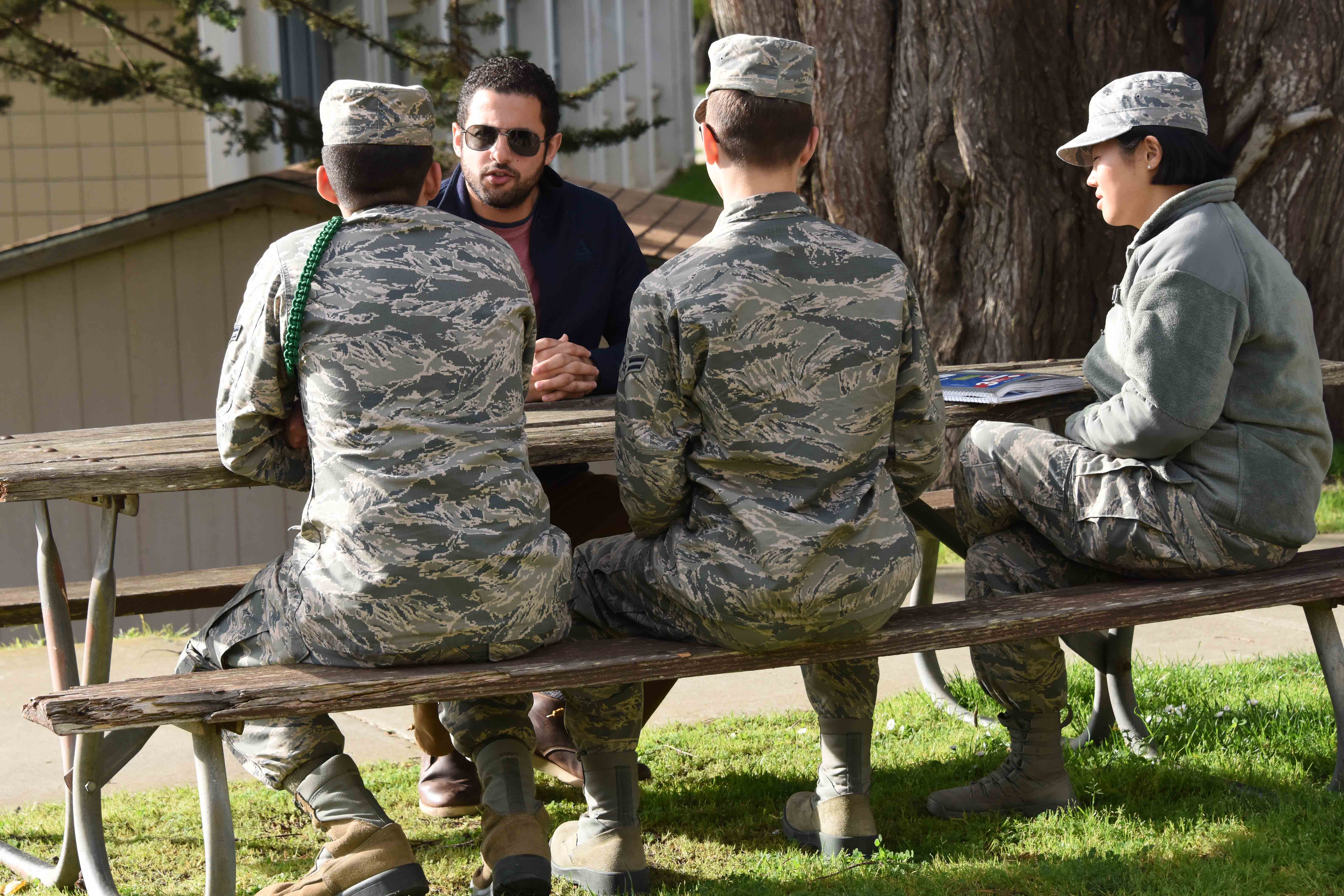 Mansour Hussein, an instructor with DLIFLC, takes advantage of the sunny morning to teach his Hebrew students outdoors.

engaged is all that’s needed, he added. “You cannot force commitment.”

While he earned his master’s degree, the idea to open up the rigid classroom schedule came gradually from a concept called Human Performance Technology, or HPT, a concept that was developed in the 1970s. HPT is a systematic approach to improving organizational success.

“The key model there is instead of analyze, design, develop,” Oded said, as it’s done in a more typical curriculum, “it’s more things like rapid prototyping.” This means they don’t have one pilot model of a teaching method. A pilot has become political, he explained. “If you do a pilot and it succeeds, it means that others need to do it, too.”

Instead, they use methods he calls initiatives. “We literally produce more initiatives than we can consume. Everybody does their own thing. And by everybody, I mean that the teachers cannot be the only decision maker. They do it together with another team and the students agree to it because they are part of that team, too.”

It works for Airman 1st Class Houston Howard, a third semester student at the Hebrew school. Hearing that he was part of building the curriculum motivated him. “It makes me a lot more interested in what we’re going to do, knowing I don’t have someone telling me what I need to learn. I can learn stuff that I’m interested in as well.”

Dr. Hyekyung Sung-Frear, dean of the European and Latin American Language School which includes Hebrew, said that during student sensing sessions that she conducts there is a noticeable difference with the Hebrew students. “They are very energetic and excited about their learning. They are proud of their involvement in learning.” Which is important, she added because “you can’t force enthusiasm.”

This method of open architecture in the classroom works very well for the Hebrew department because they come together almost as a family. With this kind of curriculum, “we are taking a calculated risk and are trusting the teachers and students,” Sung-Frear said. Oded calls that kind of trust social capital. 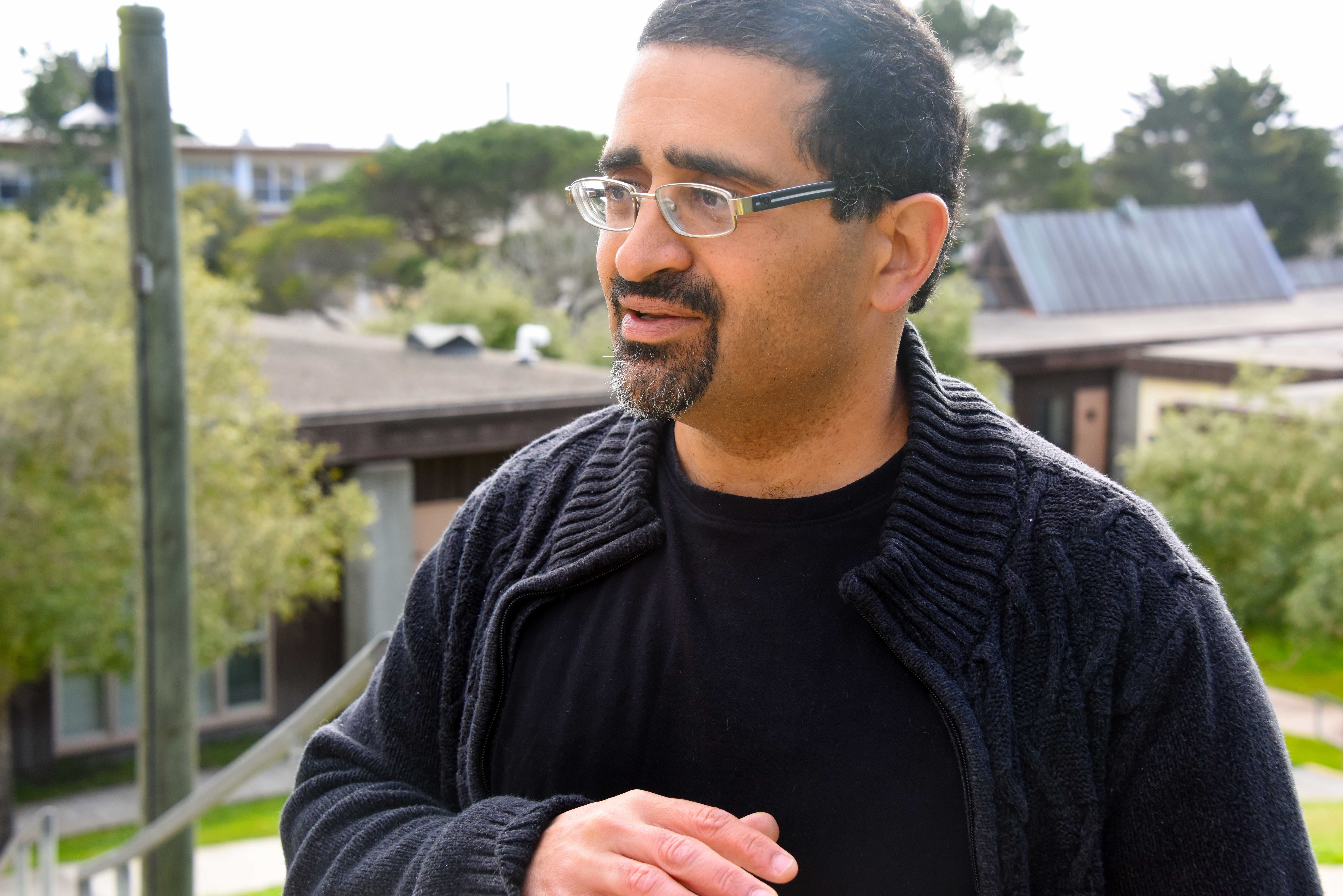 Yaniv Oded is chair of the Hewbrew department at DLIFLC. He firmly believes in an open architecture method of teaching. “The notion is that every rule means one less decision. One less decision means people that are less engaged, less professional, less committed. If you control your own destiny, you are less stressed. You are more proud of your craft. You are more involved.”

For example, in the Hebrew classrooms, they rely heavily on presentations rather than tests. This means there isn’t such an emphasis on memorizing a list of vocabulary words. Most language classrooms have the students memorize a large vocabulary list every day, something Oded isn’t big on. “There is the notion that we don’t forget things, we just lose the path to memories.”

For instance, Oded explained, say they wanted to do a presentation on economy. “What key words do you think you’ll need to use? This is how they create their own dictionary. Neuroscience supports this. First, it decreases stress because you control your own learning versus everything surprises you.” Second, he said, it helps the student retain the words. “It’s suddenly so meaningful because they needed those words.”

One might think this kind of teaching would breed chaos. Simply based on the consistently high scores the students receive when they take the final test, it doesn’t breed chaos at all. In fact, over the last three years, the Hebrew school has consistently had top scores and one of the lowest attrition rates at DLIFLC.

The reason for this, Oded believes, is that this type of learning promotes independent thinking. “You want to do an initiative? Don’t come to me for approval from above. Ask your team. Check that your students agree. Then go with it. Your whole orientation is toward the team.”

Of course that kind of approach training sounds as far from military training as you can get. When asked if the Israeli culture played a part in what made this 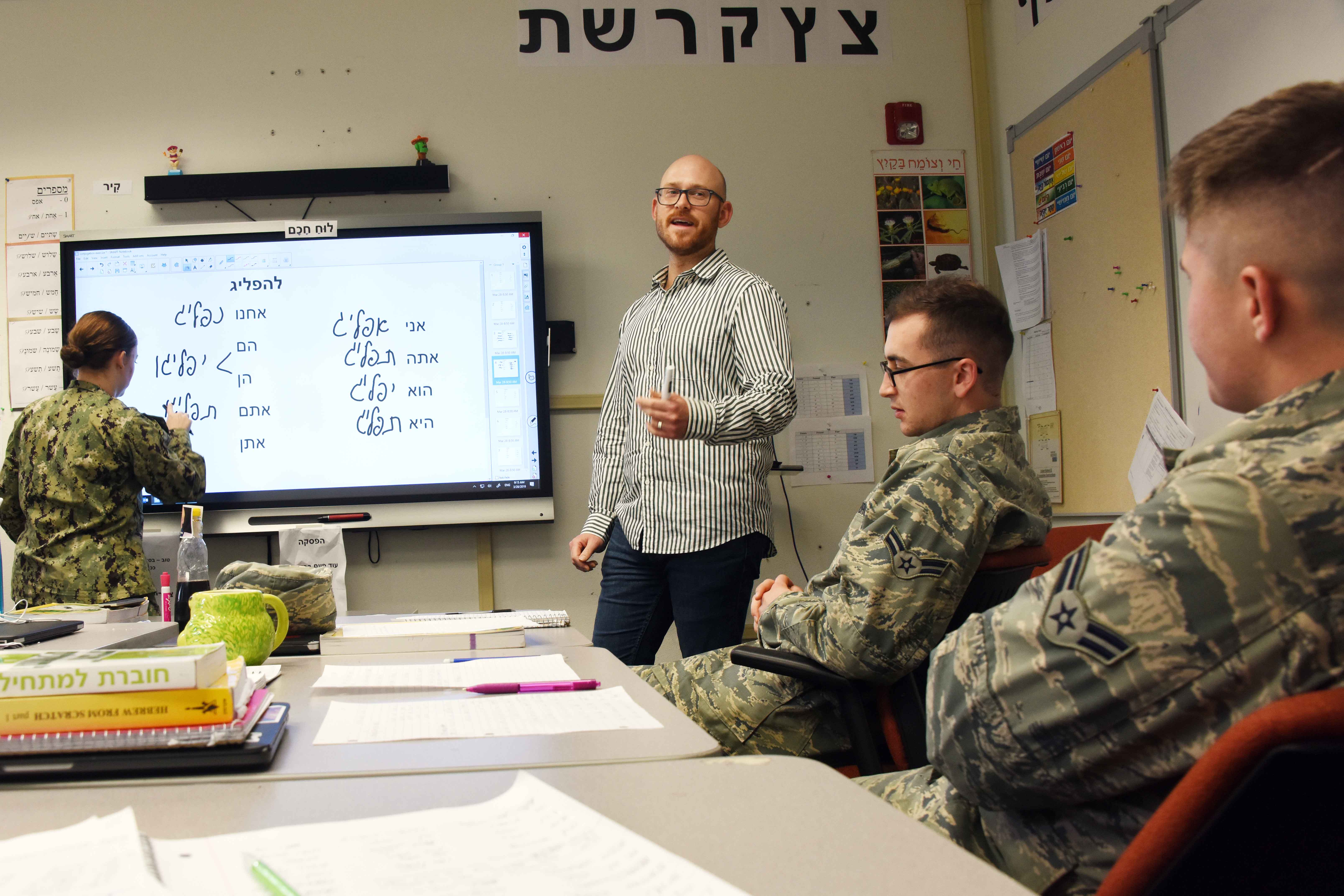 Merl Joshua, an instructor with the Hebrew department at DLIFLC, talks through a classroom exercise with his students.

training work, he said culture was part of it, but not all of it.

In Israel, he said, “they believe that the truth is in the argument. Everybody is engaged enough to argue, everyone is equal. So that’s part of it.” But, he added, there is more to it. You don’t have to be Israeli in order to see the positive aspects of a less rigid structure in teaching. This method of HPT is used by people in the business world that want to get a return on investment, Oded explained, and is applicable to everyone, not just one cultural group.

Seaman Charlene Johnson, a third-semester Hebrew student, took some college classes before she joined the Navy. She noticed a clear difference between her college classes and the Hebrew class. “I would say that colleges are more about lecturing you. They are just making you get the information that is going to be on the test. For our teachers (in the Hebrew program), they really don’t teach to the test, they just teach us everyday things that we need to learn. I think that is why we’re so successful.”

Ultimately, Oded said, he couldn’t have done it without the help of Sung-Frear.

“Sometimes I mess up, sometimes I succeed. But she helps me…she gives us the opportunity,” he said.

“I am not a believer in one-size-fits-all” when it comes to education, Sung-Frear said. “Each language program is unique.” She pointed out that while the Hebrew department has always had high scores, it has gone even further with steady improvements over the last three years. “During every new student input session, I tell them one thing: ‘Remember that you are the ones who make learning happen. You have wonderful teachers but they are just helpers. Be responsible for your own learning.’” In the Hebrew department, Sung-Frear said, she sees the students taking that to heart all the way to graduation.