A non-traditional approach to operations

On the second floor of the headquarters building, in the deputy chief of staff for operations offices toward the back wall, is the new DCSOPS director’s office. Joseph Kuykendall, a former Defense Language Institute Foreign Language Center graduate, came on board as director of DCSOPs in November 2019.

With roughly 30 people working for the director, it would seem like a busy position. And it is. However, DCSOPs has a bigger job than most. They coordinate just about everything DLIFLC related.

“I’m the primary tasker and coordinator on behalf of the commandant and the chief of staff. I am responsible for all of our operations, all of our training, all of our activities, all actions,” Kuykendall explained. 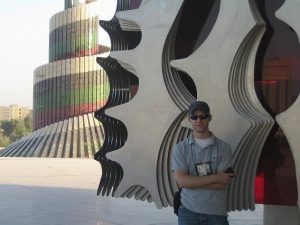 Joe Kuykendall pauses in front of the Tomb of the Unknown Soldier for Iraqi soldiers while in Baghdad in 2005.

DCSOPS coordinates tasks with all four branches of the military on the installation – heavily relying on the Army’s 229th Military Intelligence Battalion – and with multiple external organization. Kuykendall is in charge of the operations, scheduling, security and training division, along with the command language program and quality assurance office. Essentially, everything operational at DLIFLC, apart from teaching.

Shortly after his arrival, a fellow DCSOPS employee gave Kuykendall a plaque for his desk that says, “Work with me, people.” That plaque emphasizes just how much of the director’s position involves negotiation and people skills.

Kuykendall would be the first to tell you that one of the most important traits for his job is conflict resolution. And not because he has to go into foreign areas of high conflict.

“I am a firm believer in servant leadership,” he said. “Everyone has a right to have their problems listened to and supported so we can all move forward to accomplish our mission.”

The director position integrates all activities happening at the institute, explained Steve Collins, the chief of staff of DLIFLC and Kuykendall’s boss. He said a good leader doesn’t tell people what to do but works together as a team to accomplish their goals.

“You have to get everyone to believe it’s a win-win situation,” Collins said. That, he added, is the sign of a good leader.

With the immense amount of responsibility and people skills needed, one might be excused for thinking the director of DCSOPS is an overwhelming position. Kuykendall has heard that before. But he says he thrives in that kind of an atmosphere.

“This is a very mellow pace compared to what I’m used to,” he said. “The stress levels are actually much lower than where I’m coming from.” His work history underscores that point. At one time, Kuykendall was responsible for over 1,000 interpreters at 12 different forward operating bases. 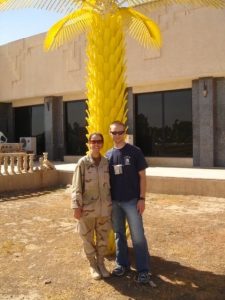 Joe Kuykendall and a former employee show off a plastic palm tree while in Mosul in 2005.

At 18, he joined the National Guard and became a DLIFLC student studying Russian as a human intelligence collector. September 11 happened shortly after and his unit was the first to deploy. As a Special Forces unit, they did, as Kuykendall described it, “a lot of very interesting operational things.”

“I had been trained – mind you I was only 20 or 21 years old at the time – to be prepared for a massive strategic engagement with post-Soviet Union countries. And now we’re in a tactical war with terrorists or insurgents.”

With nearly 20 years of operational experience, another DLIFLC language and two degrees, Kuykendall and his wife decided it was time to slow down his operational tempo to help raise a family. “We realized it’s my time to look somewhere else and maybe hand off that shield to the next generation to carry on the defense of the nation.”

To that end, Kuykendall applied and was accepted to the DCSOPS director position in 2019.

“We have a mission to provide language training and support at the point of need for the force,” he said of his job. He feels that his primary goal is to do what he can to help raise the student’s scores.”

“I cannot predict the future,” he said. “I think we have a lot of challenges to get closer to that goal. But I can say that having a fresh perspective and also being supported by the people that have been here and have a lot of institutional knowledge, provides me, I think, with a cleaner perspective on how to get there.”