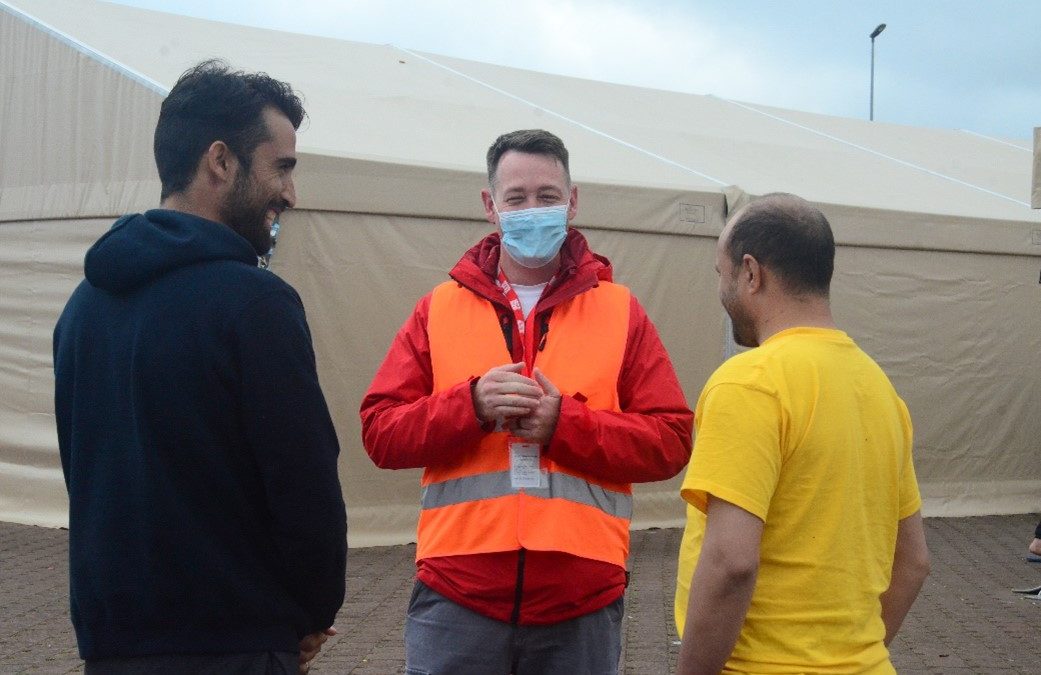 KAISERSLAUTERN, Germany – Fulfilling a once-in-a lifetime mission, current linguists and alumni from the DOD language school in Monterey, California, are helping Afghans and their families who escaped the clutches of the Taliban. For one of them, this mission is about tying up a loose end.

Soldiers, Sailors, Airmen and Marine linguists working on Rhine Ordnance Barracks at U.S. Army Garrison Rheinland-Pfalz, Germany, are well aware of the history that’s being carried each day and how they are woven into that fabric. 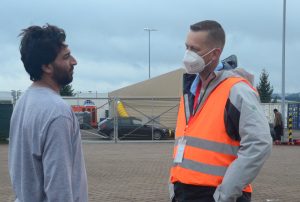 The linguists, attached to the 21st Theater Sustainment Command, are building trust between the Soldiers and the travelers they are caring for, more than 10,000 of whom have passed through the camp here, one of two stopping points in the region before moving on to the United States.

The linguist team performs integral tasks for OAW. To help assist the operation, the linguists provide a distinct skillset that supports and builds relationships between the augmentees and travelers.

“This is a very unique mission,” said Chief Warrant Officer 2 Kevin Costa, 12th Combat Aviation Brigade CH-47 Chinook pilot and Defense Language Institute Foreign Language Center, alumni. “This is a skill that I worked very hard to master. I never had this level of interaction because linguists are primarily a military intelligence asset.”

Speaking of being chosen for duty …

Linguists selected for this duty include active duty Soldiers who attached to the Monterey language center, alumni of the center, or those who have a language identifier.

“Our primary line of effort is ensuring the travelers’ well-being, and we accomplish that in many ways,” said Sgt. 1st Class Bobby Keeth, a language center instructor who volunteered to be an interpreter. “We are always walking around, talking with people, and assessing the needs of the population then reporting those needs back to the LSA (living support area) commanders.”

Selected interpreters speak Pashtun, Dari or Persian Farsi, but even being a fluent language speaker does not mitigate challenges.

“One of the biggest trials we face is the various dialects,” said Sgt. 1st Class Michael Turner, a linguist assigned as an interpreter. “Like the English language, there are several different dialects of Pashtun. To overcome this, I seek out someone who can help me better understand the individual.”

The interpreters also act as liaisons between different organizations that need assistance.

“At the beginning of the mission every single person had some sort of issue and a lot of them were important,” said Sgt. 1st Class Aaron Hamre, an interpreter assigned from the Joint Multinational Readiness Center. “When USAID came by needing to identify these issues they told us what they needed and we were able to branch out and execute. We were able to streamline the process to the point where we were providing a lot of support to those guys.”

One aspect that is apparent is the bond the interpreters have created with some of the travelers.

While walking the LSA, an Afghan male traveler invited Turner for tea. Once seated, there were five male travelers who all referred to Turner as their friend, brother, family and praised his efforts.

Many Afghans echoed this sentiment as linguists walked the entirety of the Deployment Processing Center.

“We are looking to create trust with the Afghans”, said Turner. “We try to be viewed in a positive light and we want to make sure they know we are their friends.”

Although the majority of the interpreters are linguists or alumni of the DLIFLC, Sgt. 1st Class Payam Nourbakhsh, an infantry soldier from Hohenfels, gained his fluent understanding of Farsi from his family.

“I am a first generation Iranian,” said Nourbakhsh. “I spoke Farsi daily with my family and we were Muslim, so I understand the language and culture. When I was with the 75th Ranger Regiment, I had an opportunity to take the Defense Language Proficiency Test and received a language identifier.”

For Nourbakhsh this mission is bringing him full circle. In 2004 he was actively involved in the invasion of Fallujah with the 1st Marine Division, 7th Marine Regiment.

“I was called upon by (retired) Gen. [James] Mattis (former United States Secretary of Defense) to be his interpreter because he found out I spoke the language. I interpreted for him a lot, to include the initial invasion into Iraq,” recounted Nourbakhsh. “Now I am helping those from Afghanistan. I was involved in the beginning of the Middle East conflicts and now I am seeing its end.”

One of the largest tasks for the linguists is building a bridge of trust between the travelers and the Soldiers caring for them. 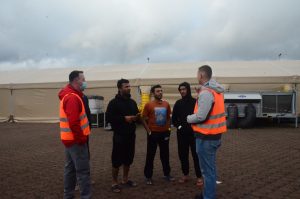 Sgts. 1st Class Bobby Keeth and Michael Turner, Operations Allies Welcome interpreters, speak with travelers from Afghanistan at Rhine Ordnance Barracks Oct. 5. Interpreters are crucial to the OAW mission as they help the Army overcome communication barriers and they help build a relationship between the Soldiers and travelers. (Photo by Shaylee Borcsani)

“Fostering positive relationships helps both parties better understand the other’s culture and norms, which enables effective conflict resolution and leads to better relationships,” said Costa. “Earning their trust and maintaining these relationships have played a vital role in ensuring their stay here is as comfortable as it can possibly be.”

“Having an understanding of the Muslim religion is also very important, like knowing that you cannot walk across the prayer mats with your boots or the mosque has to be cleaned a certain way just helps build that relationship. It is respect from both parties,” Nourbakhsh added.

To help the travelers have an easier transition, each of the linguists teach them about daily life in the United States.

“We’ve added an educational aspect which includes giving informal classes on a multitude of subjects like renting and buying a home, applying for a green card and finding employment,” said Keeth.

Survival English is also offered to the travelers.

One reasons the interpreters have success in building relationships with the travelers is their understanding of the culture, regional history, and religion. The instruction in Monterey prepares the linguists with this information.

“I’d say the cultural nuances and customs I learned from DLI is probably the thing that has helped most with this current mission,” said Keeth. “It has enabled us to build those trusting relationships with the travelers.”

“We had great cultural and language immersions that allowed us to have meaningful encounters,” added Sgt. 1st Class Solomon Chan, an alumni of DLIFLC and mission interpreter. “As a student going through the basic course, I was not immediately aware of the payoff for the non-military portions of the curriculum, but I am grateful for the minds who included those things in the training.”

The message from the interpreters is clear: this is one of the most fulfilling mission in their Army careers. For Nourbakhsh, it wraps up a two decades of deployments to the Middle East.

“I will never forget the day I stepped foot in Kabul and I didn’t know how long this war was going to last.  I couldn’t see the end,” said Nourbakhsh. “It is sad to see that people have lost their lives over there and how the Taliban took over. Some of the people had all of their families executed in front of them and by the luck of God they got away and they got to the airport and now they are here. As the years passed — with multiple rotations in Afghanistan and Iraq — it is nice to see that some of these people that were young while we were over there we are now helping them to have a better life, especially for the kids.”