Training for the military tends to follow the same model with little change. The old adage, “If it ain’t broke, don’t fix it” is alive and well in the military services.

Language training at the Defense Language Institute Foreign Language Center, on the other hand, has seen a sea of change in the last several years, none stronger than the Air Force’s Linguist Next program.

It all started with pilot training.

“For years the Air Force pilot training was a year long,” explained Master Sgt. Jesse High, a DLIFLC Office of Standardization and Academic Excellence noncommissioned officer in charge at the 311th Training Squadron. “The assumption being that that’s how long it takes to train someone to become a competent pilot.”

However, several years ago the Air Force began to question if it were really necessary to spend a year in training, or if advances in learning science and technology could change the structure to be more efficient. Could they shorten the training timeline and get the pilots into the regular Air Force in a timelier manner while still maintaining a high level of competency?

The Air Force began an experiment in its pilot training pipeline. After some creative and informed risk-taking, High said, they succeeded and cut in half the time it takes to train a pilot to the same level of skill. They were able to consistently repeat the successful results, and now have what they call a “Pilot Training Next” program. This has inspired other training groups to revisit their training to find out if they can improve learning efficiency as well. 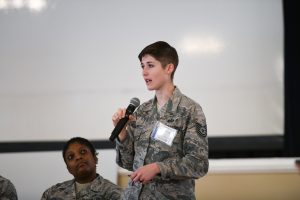 “The Air Force instituted a widespread push for innovation of existing programs across the service,” explained High, adding that they’ve highlighted three crucial fields to focus their efforts and provide funding.

One of those is the foreign language community.

“The goal for Linguist Next, similar to what was applied for Pilot Training Next, is to decouple the time component from the competency component in order to produce skilled language analysts for the mission,” explained High.

That set the stage for The Foreign Language Design Sprint, an event held at the Presidio of Monterey Oct. 15-17, which brought experts from other governmental groups, academia, and industry “to examine and challenge the status quo of linguist training, and provide foundational research to jumpstart the Linguist Next initiative,” according to information released at the event.

“We took a novel approach to problem solving,” said Julie Cantwell, the technical director for the 517th Training Group at DLIFLC and organizer for the event. “We asked, ‘What does an updated and modern learning environment look like and what can we do to improve our students’ outcomes and subsequent mission effectiveness?”

To that end, they invited the University of Maryland Applied Research Lab for Intelligence and Security to help review the 517th Training Group’s goals for personalized instruction. Over 50 people attended, both military, DLIFLC civilians and guests, to, as High stated, “examine how a restructured program, based on the most up-to-date understanding of second language acquisition and learning science, paired with advances in technologies such as Artificial Intelligence and Virtual Reality, would look and perform.”

Experts from such groups as Arizona State University, University of California Berkeley, Yale, and Global Cognition, as well as representatives from the Air Training and Education Command, began the Design Sprint by listening to a panel of DLIFLC former and current students speak about challenges to the current structure. Over the next three days, they watched presentations on current and future trends in learning, participated in discussions and framed sessions, brainstormed, and worked in small groups to come up with actionable plans.

“We spent a long time listening to stakeholders about their challenges and suggestions on ways to improve learning,” said Cantwell. “Stakeholder input is critical to the design thinking process in order to really understand the challenge. It allowed us see the problem from new perspectives and get a sense of how we could improve the learning environment with the student in mind.”

The key to designing, Cantwell said, is an interdisciplinary approach.

“It was so encouraging to see such a diverse set of experts come together to bring tangible solutions to improving foreign language learning for our military members,” Cantwell said. “They all had so much passion to help us meet our challenges and we can’t thank them enough for giving us their insights.”

The next step in the Linguist Next program is to partner with DLIFLC to implement the training ideas. From there, the aim is to begin a joint two-year pilot program to implement a new language learning model.