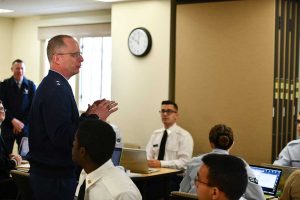 Weatherington speaks to a class of student linguists during a visit to the Presidio of Monterey. (Official DOD photo by Leo Carrillo)

“Thanks for doing what you’re doing,” Weatherington said when he stopped in to visit the Russian schoolhouse. “Whatever service you’re in, whatever your background is, I want to say thank you for raising your right hand and saying ‘I want to serve the nation.’ You’re doing something pretty cool.”

The general talked to the students about what kinds of places their career field might take them.

“There are linguists out there doing a wide range of things,” he said, from traveling abroad with a three star general as an interpreter to analyzing data that prevents “soldiers, sailors, airmen and marines from walking into a bad situation they aren’t prepared for. That’s pretty cool stuff,” he added.

The AETC is responsible for the recruiting, training and education of Air Force personnel, to include cryptolinguists trained at DLIFLC.