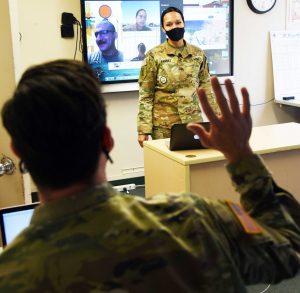 Army Staff Sgt. Aisha Bannat has qualified for the DLIFLC MLI of the year award and is recipient of the MLI Master Badge, the highest level teaching badge possible for military instructors. She has also been put forth for a Training and Doctrine Command Instructor of the Year award. (photo by Natela Cutter)

For Army Staff Sgt. Aisha Bannat, being with her students was more important than attending her own Master’s degree graduation in International Relations.

“I love teaching,” says Bannat, a heritage speaker of Arabic and a military language instructor at the Defense Language Institute Foreign Language Center.

“When I was told that my graduation was on the same day as Language Day, I chose to stay with my students who were performing Egyptian dances,” she said, speaking about the school’s 2019 annual open house that brings in several thousand visitors from the community and schools across California.

As a heritage speaker, Bannat has a unique insight into the Arabic culture that she can share with her students. She immigrated with her family from Cairo, Egypt, to Manhattan, New York at the age of 10.

But perhaps more importantly, as a staff sergeant, Bannat can also tell her students from first-hand experience how important their future missions will be down the road.

In 2010, Bannat deployed to Iraq as a human intelligence collector but was not an interpreter by profession. Regardless, she found herself translating frequently and at one time interpreted for Gen. Vincent Brooks, deputy commander of the 1st Cavalry Division in Baghdad. She even assisted with President Barack Obama’s visit. “I became somewhat of a translator celebrity but I was only a specialist,” she laughed, recounting her adventures.

With a few more Arabic dialects under her belt, in 2011, Bannat decided that she should change her Military Occupational Specialty to cryptolinguist and reenlisted. 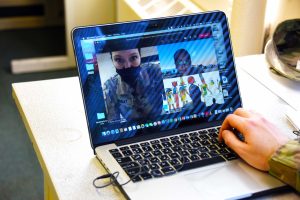 Army Staff Sgt. Aisha Bannat teaches a hybrid class for the Arabic schoolhouse. Hybrid classes are a pandemic-specific style of teaching, when some students are in the classroom and some join in virtually. (photo by Natela Cutter)

More than 10 years down the road and facing a pandemic, Bannat, now a DLIFLC instructor, felt that sharing her linguistic and cultural knowledge with students was her calling and that she needed to help them even more during a time of social distancing and online learning.

“Bannat is always asking me if she can try this project or that. She tutors on Sundays.  She gets more time on podium than any of the other instructors. She’s always volunteering at the [military] unit,” said Sgt. 1st Class Matthew Peterson, the chief MLI who is her supervisor.

Over the past year, Bannat has conducted more than 500 contact teaching hours, completed the DLIFLC-mandated Instructor Certification Course, and attained a 3/3/3 score on her Defense Language Proficiency Tests in four Arabic dialects. All of this, with her two Master’s degrees, has qualified her for the DLIFLC MLI of the Year Award and recipient of the MLI Master Badge, the highest level teaching badge possible.

“Bannat definitely goes above and beyond. Not many MLIs will achieve this level in their careers,” explained Peterson. Because of her hard work, Bannat has also been put forth for a Training and Doctrine Command Instructor of the Year award.