MONTEREY, Calif. – The U.S. Army Deputy Chief of Staff for Intelligence , Lt. Gen. Mary A. Legere, told the newly assigned class of Foreign Area Officers that they are “ambassadors of the U.S. Army at all times,” especially while on assignment abroad during their FAO careers.

Legere spoke to FAOs via video teleconference Jan. 13, 2014, sharing her experiences in the field  and responding to questions. (Photo by Natela Cutter, DLIFLC Public Affairs)

Lt. Gen Legere, participating by video teleconference, opened the week-long Joint Foreign Area Officers’ Course being held at the Defense Language Institute Foreign Language Center with insights into the strategic operating environment and the imperative for students to begin the mastery of their assigned region.

“You must understand the history, politics, geography, economy, religion, and social structure of the region…  you must have the ability to sort all that out and communicate it to policy makers,” said Legere, describing what is expected of a FAO assigned to a U.S. embassy abroad as a defense attach‚, security assistance officer, or political-military planner.

The Army G2 spoke to over 65 Army FAOs, who arrived recently at DLIFLC to begin training and academic studies at the Institute or Naval Postgraduate School.  Each FAO must learn a foreign language, earn a Master’s degree relevant to their assigned region of the world, and gain in-country experience prior to starting a career in the field as an Army FAO. 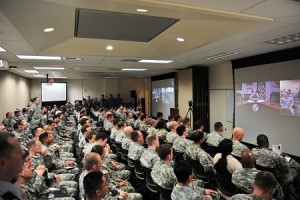 Foreign Area Officers participating in a conference at the Defense Language Institute Foreign Language Center, listen carefully to U.S. Army deputy chief of staff for intelligence, Lt. Gen. Mary Legere, as she explains what is expected from FAOs when they go on their first assignments abroad as defense attach‚s, security assistance officers, or political-military planners. (Photo by Natela Cutter, DLIFLC Public Affairs)

“You will be engaging foreign military leaders and helping build partnership capacity for our Army  by facilitating foreign military cooperation and exercises,” among other assignments, said Legere, explaining that at times a FAO may be the only U.S. military officer in an embassy abroad. “In some cases you will be it – the one and only representative of the U.S. Department of Defense.”

In order to be successful as a FAO, Legere told students,  “You must immerse yourself in the region, sustain your language – which is your weapon system –  and maintain yourself as an ambassador at all times,” to include moral and ethical integrity, she added.

“You are Soldier-Statesmen for the United States, the Department of Defense and the U.S. Army,” said Legere, reminding participants that as FAOs they need to know as much about their own country and military as they do about the foreign nation they are studying.  “You are now part of an elite corps of professionals.”