The students, faculty and staff at the Defense Language Institute Foreign Language Center were no exception.

“At first it was really difficult,” said Mariah East (using an alias), a Coast Guard petty officer 3rd class studying Spanish at DLIFLC. “It was a huge learning curve for all of us. Our teaching team had to adjust everything and reconstruct the classes to be taught online.”

In days, face-to-face learning moved rapidly to sitting in front of a computer all day. Not only were the students challenged with social distancing in the barracks while studying in small rooms for the most part, instructors had the added challenge of keeping their students focused, engaged and interested in learning.

But during two months of the shelter-in-place order, a lot of growth opportunities for the students and faculty have taken place, says Lucia Artacho, lead instructor of East’s teaching team at the Spanish schoolhouse. Along with four other instructors on her team, Artacho has embraced the huge task of switching learning formats with energy and enthusiasm.

“As dire as the situation was that forced us into this virtual environment,” Artacho said, “we are grateful…that so much growth has come out of this for our team!”

East agreed, saying the team only took a week or two to hit their stride. “Now our classes go much smoother so that we’re able to cover everything we need to. And the coordination between the teaching team I think has been really great through all of this.”

Here, Artacho shares what she and her team have learned to keep their students engaged, motivated, and healthy physically and mentally while maintaining the shelter-in-place restrictions.

Artacho has her team – that is, instructors and students – check in every morning for a huddle. Any changes and updates are talked about, and they get feedback on the previous day’s new activities. And then they all have a meeting at the end of the class day.

Good communication isn’t just about meetings. It’s just as often talking through things that might be worrying the students.

“I think they’ve been doing a good job at helping us not freak out about what level we’re at and giving us realistic feedback about where we’re supposed to be in the course at this point,” said East, whose class hallway through the course at week 37.

“Student’s brains get fried in front of the screen all day,” said Artacho. Her team has scheduled their day to have four hours of intense and focused learning in the morning. After that, two hours in the afternoon are used for other tasks, usually, as Artacho says, “something lighter and more engaging.” Some of the tasks are completed off screen.

Over in the Hebrew department, Yaniv Oded, the department chair, has started mandating no-screen speaking hours, at least one hour a day, where his students and teachers can sit outside while talking.

“Instead of having sit in from of the computers for six hours every day,” Oded explained, “we tell them to go outside and call in the online meeting rooms so that they do not burn their eyes in front of their computers all day long.” 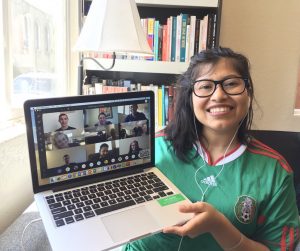 Cynthia Cea Aguilar, Spanish instructor at DLIFLC, proudly shows off a few of her students after a day spent on a virtual immersion in Mexico.

Each teacher on Artacho’s team is responsible to counsel five or six students on their team. They have reserved the hours of the afternoon to decide how they can better help each student one-on one.

“Some of them need oral practice, some of them review grammar one-on-one,” she said, “while some of them just need a friendly ear to share their personal worries with.”

“Our whole team’s philosophy is that the human in all of us needs to be taken care of before we can teach or learn anything,” Artacho said. They have been talking about purpose, motivation, and mindset a lot, she added, and have been integrating it in their activities.

One of the things they’ve added to their daily routine is a student-led workout held in Spanish. East has led several so far.

“The first time I was terrible,” she laughed. By the time she led her fourth, East didn’t hesitate over the Spanish words or what stretches to do.

In the Korean schoolhouse, lead instructor Soyoung Jeong learned a lesson from staying home to raise her children for several years between her time as an instructor at DLIFLC.

“When mom isn’t happy, the kids aren’t happy,” she said. That means she works hard to make sure her teachers are taken care of and are getting their needs met.

At the Hebrew schoolhouse, Oded has a similar philosophy about his instructors. “We are working on fun staff initiatives,” he said, naming a few things that included a teacher video song.

Artacho says she and her team give the students the ability to decide for themselves whenever possible.

For instance, she says, “material for a scheduled activity can be worked in different ways and they get to choose which one and commit to their decisions by sharing them with the group.” The student leaders are given a level of autonomy as well, deciding how the class wants to handle things like class divisions or how a task is accomplished.

Jeong works to bring that level of autonomy to her students as well, making the classes as student directed as possible. That was how they came up with the idea to let the students make their own videos, like Youtubers. 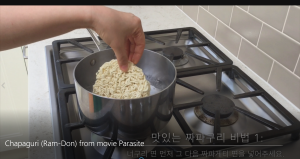 Soyoung Jeong, Korean instructor at DLIFLC, makes Chapaguri in a video she created as a way to engage her students.

Jeong and her team worked with their students to create YouTube-like videos in Korean.

It came about when they wanted to celebrate what was supposed to be Language Day, DLIFLC’s annual open house, by watching a movie.

“But we wanted to make it more fun, just to have fun,” she said.

Someone suggested making a YouTube video like Unboxing, and the idea took off. Each student made their own videos in Korean, with Jeong joining in the fun with her own creation on how to make Chapaguri (Ram-Don) from the movie “Parasite.”

“Actually, it was a really good way to deliver language in an engaging way,” Jeong said. “It was really good practice (for the) OPI test as well,” she said, speaking about the Oral Proficiency Interview that is the final oral exam for students.

Artacho’s team took a more technological approach. It all started when Cynthia Cea Aguilar, an instructor on Artacho’s team, asked her students how much time they spend on the internet.

“Half of my class spends more than two hours on video games. A day,” Aguilar repeated. After talking it over, the team, with Aguilar as the lead, decided to harness that by putting together an app that took the students to Mexico on a virtual immersion trip.

Starting at the Monterey airport, the students traveled virtually to Mexico and eventually to Zocalo, while the instructors roll played as the doctor checking for COVID-19 symptoms, the merchant selling cell phone plans at the airport, or played the confused tourist whom the students had to help.

“We connected with our students on a different level,” said Aguilar, happy after a day spent on the virtual immersion. “We learned, we laughed, we danced and we thrived together.”

The most important thing, Jeong said, is that the instructors are able to “reach” their students. “The teachers in my team have been trying really hard to find a better, more practical, innovative way to improve student language proficiency in this virtual class setting,” she said. “We wanted to show that online class is as effective as, or even better, than class in the school house.”

For Artacho, having her students engaged, motivated, and physically and mentally healthy, is a rush. “Just seeing them willing to be playful in Spanish, regardless of their level, is an absolute success in my heart.”