For the first time in the history of the Defense Language Institute Foreign Language Center, two graduates were awarded baccalaureate degrees in foreign language during a graduation ceremony held on Soldier Field on Thursday, April 7, 2022.

“It’s an amazing opportunity to be able to get a bachelor’s like this for doing our job,” said Rivera. “The military pays us to learn this language and now we’re getting rewarded with a degree for our work and I think that’s awesome.” 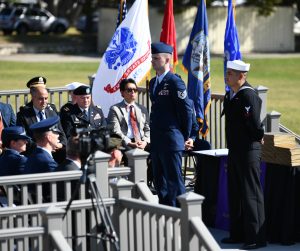 Rivera’s first experience with a foreign language came when he arrived to DLIFLC for the Chinese-Mandarin Basic Course. After completing the course, Rivera reported to his next duty station to work with his new language.

While actively working in his target language, Rivera was presented the opportunity to take the advanced course. At the time, there was no promise he would receive a bachelor’s degree, but he decided to take the course to further advance his skills.

“Within our field, accuracy and quality of our work is extremely important. You have to sharpen your skills constantly. Anyone who has learned a language as an adult can attest to the fact that it’s difficult to retain,” said Rivera. “Taking the advanced course helped me level up my skills and I knew it would make me more efficient day to day. Most importantly, my advanced knowledge will help me help other linguists.” 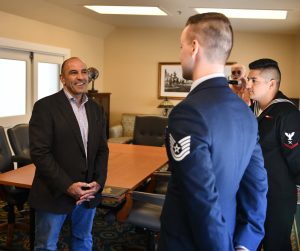 Congressman Jimmy Panetta meets with the B.A. degree graduates during a visit to DLIFLC April 8.

Miller, who received his bachelor’s degree in foreign language with a concentration in Russian, said the journey was long and difficult but well worth it.
“I am glad to have finally finished. This is the equivalent of cramming what would be a four-year degree into a year and a half of study,” said Miller. “I’ve been lucky to have been actively using my language skills already and I really hope to continue doing that.”

For the past 18 years, DLIFLC has only been able to award associates degrees in foreign language, but in March of 2021, Congressman Jimmy Panetta announced the introduction of the Language Improvement (DLI) Act which would allow DLIFLC to confer a Bachelor of Arts degree in foreign language to any graduate who fulfills the degree requirements. The bill was signed into law in December 2021.

To receive the B.A. degree, students must satisfy their foreign language major coursework through the DLIFLC Basic Course and either the intermediate or advanced courses offered in-residence in Monterey or at an accredited satellite campus. Service members must fulfill general education and elective requirements through outside coursework, earning a total of 120 credits for the degree.

“Today is the culmination of a very long journey. Not just for the service members receiving their bachelor’s, but for the institution in general,” said DLIFLC Provost Dr. Robert Savukinas. “DLI originally opened its doors in 1941 with a small language program at Chrissy Field, San Francisco, teaching Japanese. Now look at where we are today through a team effort from people both internal and external to DLIFLC.”

The DLIFLC is the Department of Defense’s premier foreign language provider and trains an average of 2,500 military linguists each year in 14 different languages. DLIFLC employs mainly native-speaking faculty who come from more than 90 countries.