The change of command ceremony was presided over by Maj. Gen. Tony Hale, commanding general of the U.S. Army Intelligence Center of Excellence and Fort Huachuca. 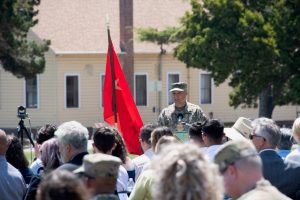 Col. Gary Hausman, former commandant of DLIFLC, speaks to friends, family and former colleagues at the change of command ceremony held at the Presidio of Monterey July 8, 2021.

During his speech, Hale talked about the importance of support for the students, something that takes the entire staff and cadre. Especially, he added, in the midst of a pandemic.

“During a time of uncertainty, our Soldiers needed guidance and leadership [that was] exemplified by Col. Hausman and the support of his spouse, Michelle,” said Hale in his remarks.

Though he served as commandant since 2018, Hausman’s tenure was dominated by the spread of a new and deadly virus known as COVID-19, which became a worldwide pandemic that saw entire countries going into lockdown.

Thanks to Hausman’s leadership, DLIFLC was able to transition to online learning without missing a day of training within 24 hours of Monterey County adopting shelter-in-place orders. Hausman’s calm leadership helped DLIFLC navigate the unfamiliar territory that came with 17 months of restricted movement, minimal face-to-face instruction and strict social distancing rules.

“I’m proud to say I’m the 30th commandant but I’m more proud to say that I’m the COVID commandant,” said Hausman, reflecting upon the months spent in hours upon hours of online meetings with staff, faculty and students to keep the mission moving forward.

Kievit came to DLIFLC from the U.S. Army War College in Carlisle, Pennsylvania. Commissioned in 1998, he has worked in both infantry and civil affairs assignments with seven deployments to his credit. 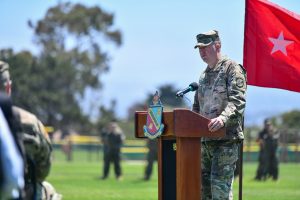 Col. James Kievit, new commandant of DLIFLC, addresses friends, family and colleagues during the change of command ceremony held at the Presidio of Monterey July 8, 2021.

“We look forward to joining the exceptional team arrayed before us,” Kievit said in his remarks during the ceremony.

Hausman has retired from the military. He and his wife plan to do a cross-country drive following the retirement and change of command ceremonies.

DLIFLC is regarded as one of the finest schools for foreign language instruction in the world. The institute provides resident instruction in 15 languages to approximately 2,500 military service members, five days a week, seven hours per day, with two to three hours of homework each night. Generally, students spend between 36 and 64 weeks at the Presidio, depending on the difficulty of the language.