If you had told 17-year-old Devin Clarke that by the time he was 30, he would have joined the Army, learned a new language in 64 weeks, deployed multiple times to the Middle East and been injured in a blast, he wouldn’t have believed you.

“I wanted to be an astronaut. I thought I’d be exploring uncharted territories in outer space, not speaking to an Arab shopkeeper in a war torn country,” he said. 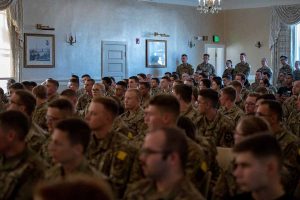 It’s 4 p.m., almost time for Clarke, now a sergeant in the Army, to take the stage at the Weckerling Center at the Presidio of Monterey. He will be speaking to Defense Language Institute Foreign Language Center students who, like himself, are a military occupational specialty known as human intelligence collectors.

“It’s about having good relationship with the people that we’re talking to,” Clarke said, “for the sake of building positive rapport and hopefully getting better information in that same vein.” In pursuit of that, he added, “language and culture is really what connects us as human beings and it’s the same thing on the battle field.”

The majority of the students at DLIFLC are linguists. Their job is to be involved in language every day. In the HUMINT world, however, language is only one track you can take. Once they finish basic training, they go to Fort Huachuca, Arizona, where they train for 20 weeks. According to Clarke, from there the Soldiers often want to jump right into their jobs. But for those who then have to take 64 weeks of language training, it can be tough to stay motivated.

“They want to get right into the fight or contribute in some meaningful way,” said Clarke. “But they’re told they have to press the brakes because they have this optional language school that they’re going to go to.”

In the future of ever-changing warfare, DLIFLC Command Sgt. Maj. Thomas Donehue believes all human intelligence collectors will need to have a foreign language for their job.

“When you look at large scale combat operations in the future battlefield against the peer threat, it will be imperative for our HUMINTers to have a solid knowledge of a foreign language,” Donehue said. “It’s going to be a much different battlefield than what we’ve seen the last 18 years in Afghanistan and Iraq.”

Once he gets in front of the students, Clarke said, he’ll dispel the notion that they won’t need the language downrange.

“I’ve had very, very real experience dealing with and using my language in a mission critical situation and in context,” he said. 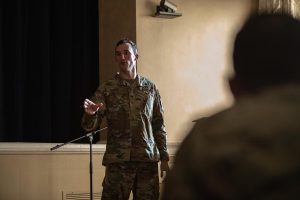 When Clarke joined the Army in 2015, he had no idea how far his career in the Army would take him. Once he graduated from Fort Huachuca, Clarke had the opportunity to deploy with a special operations unit to, as he said, “get a taste of the operational experience,” with United States Special Operations Command. When Clarke came back from his deployment, he went to DLIFLC to learn Iraqi Arabic and graduated with honors in 2018. From there, Clarke was able to join back up with a Special Forces unit out of Fort Campbell, Kentucky.

“I’m one of those people who does their best when I’m drawn to a mission or task that I’m invested in, emotionally and personally,” Clarke explained. “It provides a challenge. If you have exceptional skill sets, you’re going to use it [in special operations] regardless of your rank, your position or your gender. I really like that.”

In 2019, Clarke was about to get the challenge of his life.

In January, he and his unit were deployed to Syria when they were attacked by a suicide bomber. Clarke was thrown back four to five feet from the power of the blast. Four other Americans were killed in that blast. Among them was Navy Senior Chief Shannon Kent, a fellow DLIFLC Arabic graduate.

“You have these individuals like Senior Chief Kent, who was literally a pioneer as a woman in the military and a high mark for what a linguist can be, irrespective of gender. She was the gold standard,” Clarke said.

Clarke sustained second and third degree burns, blew both eardrums and suffered traumatic brain injury. Ten months later, Clarke is back on duty and joking about his TBI.

“I’m recalling this Iraqi vocab better than I thought I would. I’m proud of myself. Maybe I’m not as bad as I thought,” Clarke laughed.

A few feet ahead of him during the attack in Syria, Capt. John Turnbull was blinded by the blast.

“He just ran the Army Ten Miler,” Clarke said of Turnbull. “I felt like a total schlubby loser. I found out the night before and I was like, great. I should do that too.”

For Clarke, it’s important that he share with other HUMINTs the stories of these people that inspired him to be better. “These people need to be memorialized,” he said. “Not just as military service members but for the amazing human beings they were, too.”