Things haven’t turned out exactly as Marine Lance Cpl. Marissa Dow planned since she walked into the recruiter’s office a few years ago.

“The recruiter sold me on the values of the Marine Corps and then he asked me what I wanted to do. I wanted to do medical.” When she discovered that the Marine Corps doesn’t have medical, she decided it didn’t matter – the Corps was what she wanted. A few months after graduating high school, Dow was in basic training when she learned she was headed to the Defense Language Institute Foreign Language Center to become a linguist.

Nearly three months of tutoring prior to starting class gave Dow and a fellow Marine classmate a boost, she felt. And then March 12, 2020, the first day they were to begin Indonesian class, the consequences of a worldwide pandemic hit – classes at DLIFLC went entirely virtual.

“We were hoping that we would meet the students face-to-face before we had to go online 100%,” said lead Indonesian instructor Fransiska Oktoprimasakti. But with a completely new and deadly virus threatening, the decision was made. To Oktoprimasakti, that turned out to be a good thing for her class because they didn’t have expectations or preconceived notions.

“They were told, ‘Okay, you’re not going to see your teacher so you have to study really hard because you have to be independent, you have to be an autonomous learner,’” said Oktoprimasakti, who believes this is what helped them to try harder and study more.

There were challenges and good things, just like every class, she said. The weekly online tests, for instance, were difficult at first. The system that they were asked to use was buggy in the beginning. It would lose answers or stop working altogether right in the middle of the test. “It was quite a nightmare.”

One of the great advantages, she said, were the students themselves.

“We’re so lucky to get self-motivated, very diligent, smart people in this class,” said Oktoprimasakti about her class, where two of the students were on their second language at DLIFLC. One of those students was a seasoned Navy officer and class leader who helped the other students optimize their studying, Oktoprimasakti added.

Dow said, “We still found ways to make jokes, have fun so it wasn’t just sitting, staring at a computer. I think that the teachers did an amazing job of adapting.”

With eight teachers of varying ages on the team, it was at times a challenge for them, said Dow. “They always worked really hard to give us everything we needed so we could still do well in class.”

Another advantage to virtual classes is that it opens up hours when the instructors are available. Before teleworking, teachers were reluctant to drive to the Institute so early in the morning to offer tutoring before class, Oktoprimasakti explained. Now, working from home without the commute, teachers are much more willing to meet with the students for zero hour in the morning or 8th hour in the afternoon after class.

All of their hard work paid off. On November 25, all eight students graduated as the first class at DLIFLC to do their entire language training virtually, all meeting or exceeding DLIFLC standards. 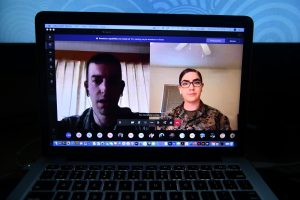 Marine Lance Cpl. Marissa Dow (right) along with fellow classmate Navy Lt. Cmdr. Joseph Carroll, both students in the Indonesian schoolhouse at DLIFLC, speak during their virtual graduation Nov. 25, 2020. Theirs is the first all-virtual class to graduate since COVID-19 began. (Photo by Leo Carrillo)

During the graduation, Dow, who received a score of 2+/3/2, said, “I’d like to leave you all with the words of President Joko Widodo. ‘Ready, not ready, you must be ready.’ We don’t know what will happen after we graduate, but in my opinion, everyone in this class is ready to overcome whatever the future holds.”

That was her mindset during the entire course, she said.