Despite the global pandemic, a team from the San Jose office of U.S. Citizenship and Immigration Services traveled to the Defense Language Institute Foreign Language Center at the Presidio of Monterey to naturalize 18 individuals on June 25. 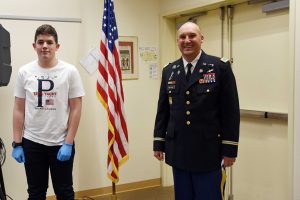 “I am proud to announce that DLI and POM [Presidio of Monterey] have 18 new citizens. It is always inspiring to see [individuals] achieve their goal and become U.S. citizens,” said DLIFLC Commandant Col. Gary Hausman.

The group of naturalized individuals consisted of instructors, their family members, and several POM employees. The process normally includes interviews with prospective U.S. citizens earlier in the day. Once the interviews are completed successfully, USCIS representatives are able to prepare certificates for those to be naturalized in the afternoon ceremony.

“I am so excited to be an official citizen of the United States,” said Dody Ghassan Mounjed, a son of one of the instructors and a 7th grader at Monte Vista Christian School. Mounjed was chosen to lead the newly naturalized group in the Pledge of Allegiance. 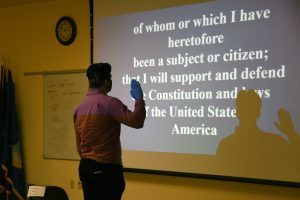 Immaduaddin Burhani recites the Pledge of Allegiance at the ceremony.

“We say the Pledge of Allegiance every day at school, but I am so nervous,” said Mounjed, prior to the ceremony. “I have practiced for two weeks every day,” he explained, as his mother looked on proudly. Munjed came to the U.S. when he just a baby from Beirut, Lebanon, with his parents.

Sitting next to each other, socially distanced by six feet and wearing masks, Immaduaddin Burhani was equally excited. “I love the U.S. because it allows everyone to achieve their dreams without any limitation.”

One dream has already come true for the Burhani family, originally from Afghanistan. They recently became new home owners in Seaside, California.

“It’s awesome! We just bought a house and I built a deck from watching YouTube,” said the 20-year-old, who lives with his parents and is finishing up his prerequisites at Monterey Peninsula College. “Home Depot is the best place ever,” said Burhani, who is planning to attend the University of California Berkeley to become a network engineer.

With COVID-19 all-pervasive, the normally well attended ceremony with much fanfare and a cake with the American flag had to be omitted this year. Regardless, the new U.S. citizens could not be more excited as they enthusiastically posed for photos with their naturalization certificates.

USCIS offices were closed in March as part of the effort to stop the spread of the coronavirus, suspending in-person services. They began reopening their offices in early June. For more information visit: www.uscis.gov/