Fall of the Berlin Wall: a DLIFLC perspective

The night the Berlin Wall fell, Nov. 9, 1989, Feridon Namdar was at home watching television with his wife. Excitement had been in the air for days, if not weeks, as hundreds of reporters transmitted their broadcasts from the Wall, waiting for it to open. 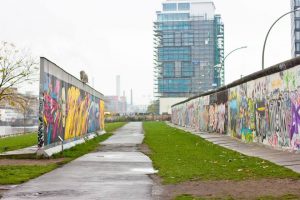 “We went out that night and there were back to back people all over the streets,” recalled Namdar, sitting in his office at the Defense Language Institute Foreign Language Center where he teaches Persian Farsi. “[West] Berliners were walking around or sitting on the wall waiting for the people [East Berliners] to come out,” and push their way past the East German guards.

“The East Berliners were shouting at the East Berlin guards and the guards didn’t know what to do,” Namdar said. Indeed, the confusion was caused by an error in a routine press conference where an unexpected announcement was made that relaxed travel restrictions from East to West.

Hearing this on the news, East Berliners rushed to the Wall to see for themselves. Soon, thousands of people were clamoring to have the guards open the border crossings. Shortly past midnight, a few people were allowed passage and then the flood gates opened. By morning, more than 20,000 people crossed, fearing that the communist regime would close the Wall again.

“The first piece of the Wall was removed by one of the East Berlin guards, and then the crowds began using hammers,” Namdar said. Meanwhile, West Berlin companies began bringing out food. “They gave the people fruit, bananas, and Coca Cola,” things they didn’t have in East Berlin, especially in the winter. 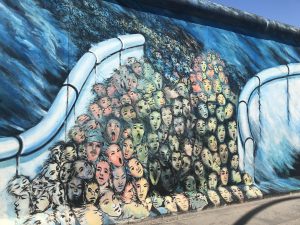 The fall of the Berlin Wall that night signaled an end to an era and the weakening grip of the Russian communist regime over satellite countries across Eastern Europe. One by one, the regimes fell in the ensuing months, but not without a struggle by those who needed to adapt to a much faster pace of life and an unforgiving market economy.

One of the things that Namdar noticed about East Germans at the time was a large degree of naiveté they possessed about life in the West. They had never seen shiny neon lights, stores full of food, clothes, and other items not accessible to them in the East.

“At one point, the German government said they would give them one German Mark for one East German Mark and the first thing they did was buy cars,” he explained. “One of them bought my BMW for 17,000 German Marks and since the banks were running out of cash, they brought [all the money]  to me,” in five Mark increments, Namdar recalled, saying that they didn’t even test drive the car.

“I know some people that sold them junk, cars that would fall apart the next day,” he explained.

Down the road, when the euphoria had turned into reality, it was difficult for East Germans to find jobs because their qualifications were not as strong as those who were educated in the West. “[East German] companies weren’t really real,” he said. He said that “one guy had the job of handing the screwdriver over, the next one screwed the bolt in, and the third put the screwdriver away.”

For another DLIFLC employee, the fall of the Wall was bittersweet. Dr. Gerd Brendel left East Germany at the age of 10 with his family who fled in 1955 before the Wall was built.

Brendel had a relatively smooth transition to the United States as a young man. He attended California State Long Beach and got his Ph.D. from the University of California Irvine. In 1976 he applied to DLIFLC and became a German teacher. 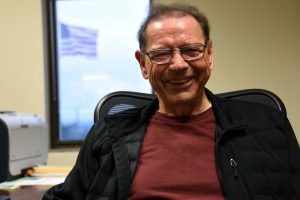 Gert Brendel has served at DLIFLC for more than 30 years in a number of different positions. He currently works in the proficiency standards division.

As fate would have it, Brendel never really forgot his homeland and had an urge to try to help his people when the Wall fell in 1989. In 1993, as unification was struggling, Brendel applied to become a professor at the East German version of a military language school, similar to DLIFLC.

“They wanted someone from the West to teach English and German to primarily [students from] African countries … I was in the middle of this transition of the East German military being absorbed by the West German military,” he explained.

But Brendel’s enthusiasm for teaching back home dwindled as he slowly realized that he was not as welcome as he had expected.  In time he discovered that the old Tomas Wolfe adage “you can never go home again,” was true.

“As a ‘Westerner’ I was greeted with a great deal of skepticism,” as someone from the West taking a position away from equally qualified East German professors. “This distrust, and at times open hostility, despite my having spent my early formative years in East Germany, led to my return to DLI in April 2001,” Brendel said.

Today, both Namdar and Brendl work to share their experiences and academic knowledge with students at DLIFLC, fully realizing that, for better or for worse, they were witness to incredible changing times in world history.