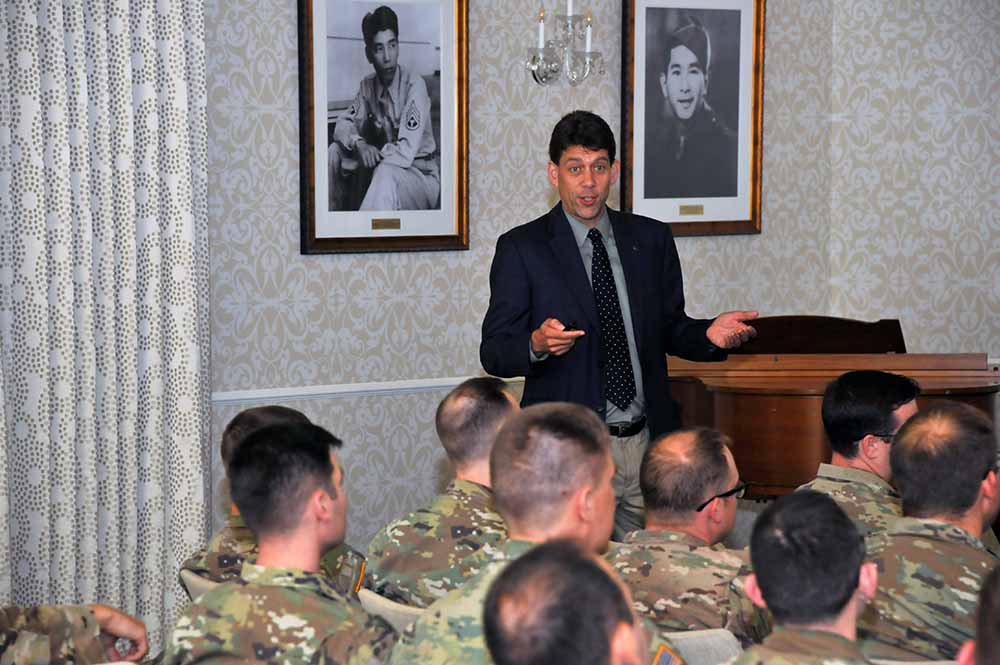 Tomb titled his talk “Beyond Democracy in Africa” and began by asking FAOs what is the definition of democracy.

FAOs suggested ideas of government ruled by the people, equality and freedom. Tomb shared the lengthy United Nations definition of democracy, but dwelled on the concept of representative governance – the manner of governing in which the people determine their political, economic, social and cultural systems. He followed with an anecdote to show the low quality of representative governance in African countries.

“Mo Ibrahim, Sudanese businessman and telecom magnate, offers the Mo Ibrahim Award to any African president that steps down from power at the end of his term,” said Tomb.

Since 2006, only four African leaders have been honored with the $5 million award, proving the Ibrahim Prize for Achievement in African Leadership to be one of the world’s most exclusive awards.

Tomb continued, “The fact that so few African leaders have accepted the award and stood down demonstrates the fact of how much money is to be made by staying in power.”

“There’s this perception that Africa is a very poor place and there are certainly a lot of poor people, but in reality, it is an extremely wealthy continent.”

Therefore, democracy in Africa falls victim to corruption by many African leaders, something that unfortunately runs deep into the culture, according to Tomb. Quoting statistics from the Mo Ibrahim Foundation, nine of the top 10 governance performers are civilian regimes that have come to power through elections. The top 10 worst governance performers are military regimes that came to power through coups or authoritarian transitions.

“The governors who are elected have to meet the needs of the people or the people will vote them out and bring in somebody who will do a better job representing their interest,” said Tomb, explaining why civilian regimes perform better as opposed to “rule through the barrel of a gun.”

Many African nations face a lot of problems on the road to democracy such as economic, security and demographic challenges along with corruption, natural resource concerns, climate change, desertification, and food scarcity.

“I lumped them into these big broad categories, but I’m sure there are a lot more,” said Tomb. “In problems facing the continent there is certainly no shortage of them.”

In economic challenges, Africa is a very poor place for the vast majority of people, “but there are also massive economic opportunities. Sixteen of the fastest growing economies in the world are in Africa,” said Tomb. From 1970 to 2008, Africa has experienced enormous economic growth becoming the third largest growing economic region in the world. The growth slowed after the global financial crisis in 2008.

Resources are incredibly abundant in Africa, which the Chinese seek along with access to fast growing markets. China is building infrastructure in Africa that African countries otherwise could not afford, especially improvements to ports, highways and railroads.

Demographically, 50 percent of the population is under 20 years of age, more than a billion people, and the population continues to grow rapidly, according to Tomb. But, large parts of the population face humanitarian crises such as major epidemics like Ebola or AIDS. Also, millions of people have been displaced by terrorist activity such as Boko Haram, which has emerged as an extension of Al Qaeda in northeastern Nigeria and parts of Niger, Chad and Cameroon.

All of these contribute to security challenges. U.N., African National Union and European Union peacekeeping operations take place across the continent. Tomb also noted the religious tension that spreads across Africa between the majority Muslim and the majority Christian countries. This tension has reinforced terrorist activity such as Boko Haram and Al-Shabaab, an active militant group in East Africa. Both have adopted the black flag of ISIS, which has plagued parts of Iraq, Syria and Libya.

“If African countries can get governance right then there are incredible opportunities,” said Tomb. “Democratically elected, civilian controlled armed forces lead to security and better governed countries, which leads to more economic development and ultimately a better place to be.”

Tomb’s teaching focus is on executive education, conflict management, conflict resolution, post-conflict recovery, civil-military relations and civil society organizations. He spoke as part of the FAO program’s monthly U.S. Army officer professional development program, which is a critical part of FAO training at DLIFLC. The monthly program is as an essential addition to the biannual Joint Foreign Area Officer Course Phase I, usually held in January and June.