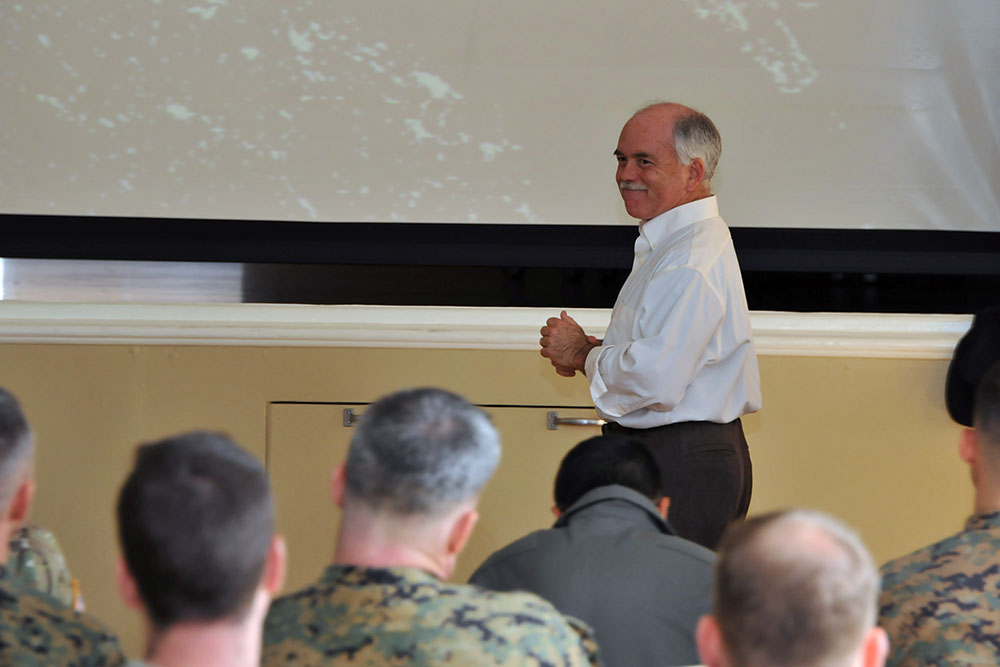 Huntley’s talk came merely two weeks after North Korea’s threat to strike the U.S. Territory of Guam prompting U.S. Secretary of Defense, James Mattis, to say that, “The United States and our allies have the demonstrated capabilities and unquestionable commitment to defend ourselves from an attack,” and also stated that, “The DPRK (Democratic People’s Republic of Korea) should cease any consideration of actions that would lead to the end of its regime and the destruction of its people.”

Huntley subtitled his talk “Dr. Strange Kim (Jong Un)… or, how I learned to stop worrying and love the crazy dictator with the bomb.” Kim Jong Un took power in North Korea in 2011 after the death of his father, Kim Jong Il.

“Why does North Korea do anything it does?” asked Huntley, who explained that the motives of the world’s most secretive and isolated regime are sometimes baffling. “Most analysts come to a consensus that the primary focus of North Korea is regime survival.”

Huntley continued with a detailed lecture on North Korea’s quest to obtain the bomb.

Beyond the Cold War

South Korea and the U.S. have maintained a bilateral Alliance for more than 60 years. Born out of the Korean War, the Alliance grew stronger, both during and after the Cold War. Today, both nations “go together,” as their slogan suggests, to meet the security challenges of Northeast Asia. 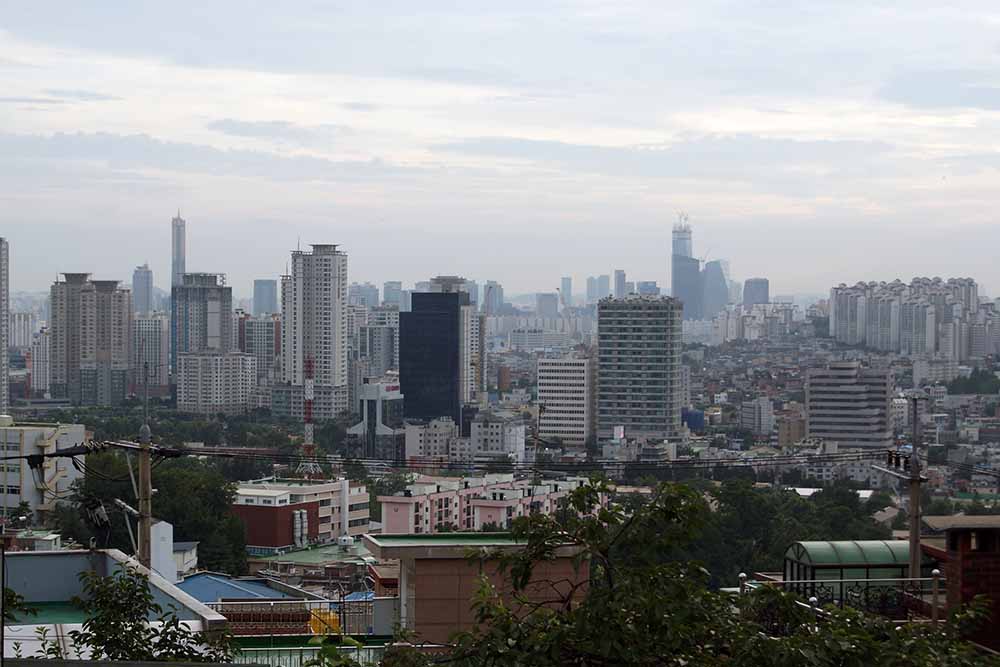 In the 1980s, Mikhail Gorbachev, the last leader of the Soviet Union, pushed North Korea to sign the Nuclear Nonproliferation Treaty. Huntley discussed the 1970 treaty, which commits states with nuclear weapons to pursue disarmament, while states without nuclear weapons agree to forgo developing or acquiring weapons of their own.

Then, the world began to change dramatically. The Berlin Wall fell and the Tiananmen Square protests for democracy in Beijing both took place in 1989, followed by the downfall and 1991 collapse of the Soviet Union, North Korea’s main benefactor.

“The Soviet Union left North Korea out in the cold (after the collapse),” said Huntley.

At that time in history, many believed that North Korea would be next.

“In the early to mid-1990s North Korea was imploding. We didn’t realize it then because the problem was chronic rather than acute,” said Huntley.

In 1994, North Korea expelled investigators from the International Atomic Energy Agency instigating the first nuclear crisis. This prompted the Clinton Administration to deal with the situation. Former U.S. President Jimmy Carter traveled to North Korea and was able to work out an agreement with President Kim Il Sung. Known as the Agreed Framework, it allowed North Korea to replace nuclear reactors with light-water reactors, which is allowable under the Nuclear Nonproliferation Treaty.

Kim Il Sung died later in 1994 and was followed by his son, Kim Jong Il.

Because of the belief that North Korea would be the next communist state to collapse, “most Koreans supported the Agreed Framework thinking that reunification would occur before the light-water reactors were ever completed,” said Huntley. 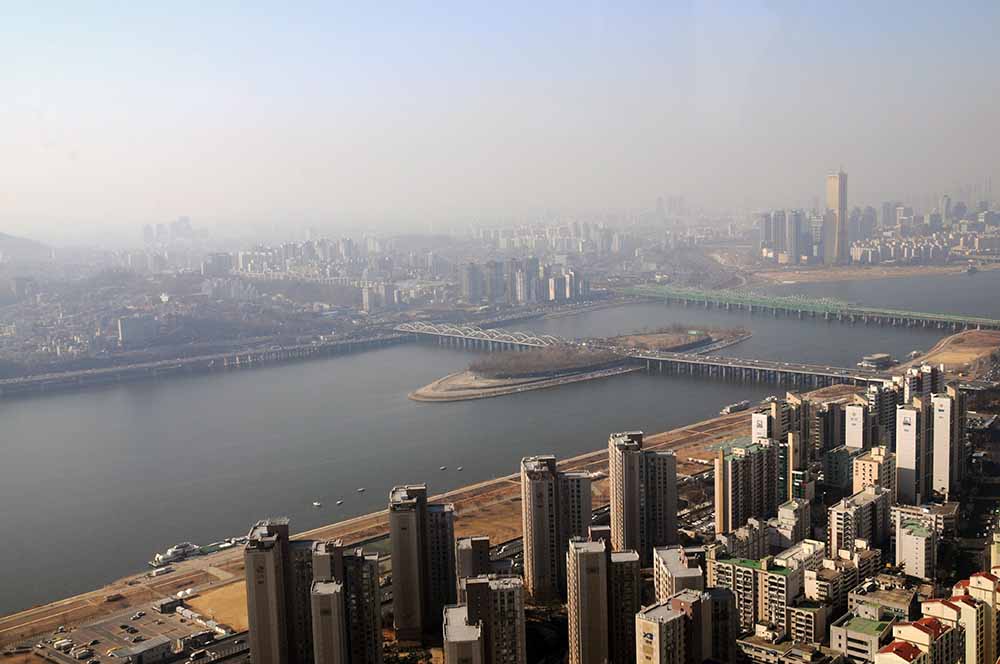 In 2009, North Korea’s first minimally successful nuclear test took place instigating the third nuclear crisis. North Korea may have achieved at least some part of its nuclear ambitions without full weaponization, but it has still not fully developed its delivery systems. It may have succeeded in building medium-range ballistic missiles capable of hitting targets in South Korea and Japan, but has not developed intercontinental ballistic missiles, or ICBMs – heavy space rockets – capable of hitting long range targets. The North could hit Seoul, but according to Huntley, that is North Korea’s “prize” and may not be willing to drop nuclear weapons anywhere south.

The biggest dilemma in all of this, Huntley argued, is that if the U.S. were to accept North Korea as a nuclear state, it could null the 1970 Nuclear Nonproliferation Treaty causing other states to pursue nuclear weapons, but it is already obvious that North Korea has nuclear capabilities, according to Huntley. 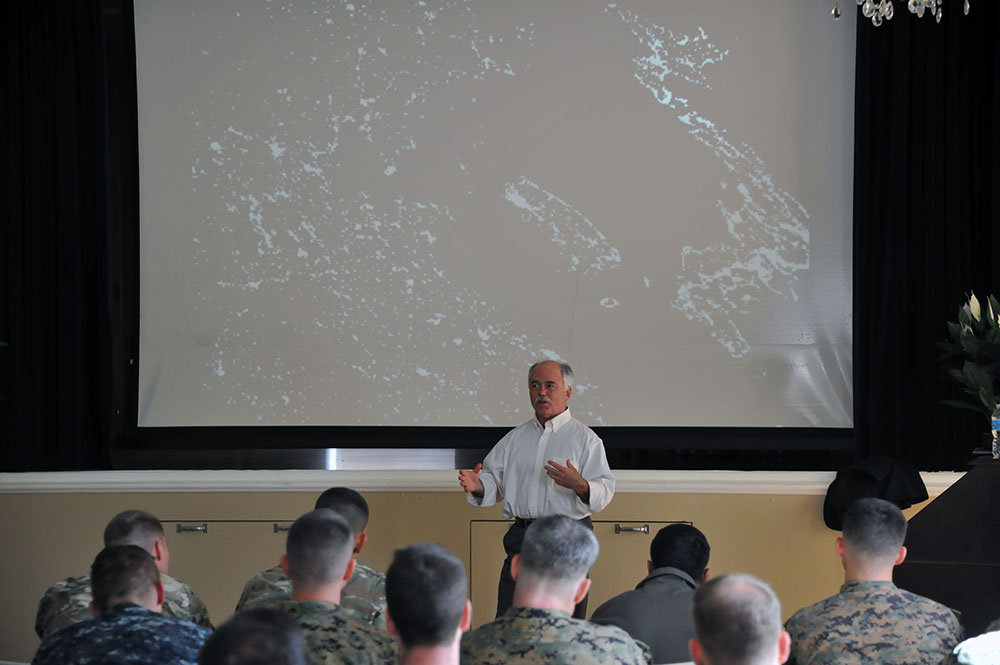 Dr. Wade Huntley, academic director of the Regional Security Education Program at the Naval Postgraduate School, in Monterey, California, spoke to Foreign Area Officers in language training at the Defense Language Institute Foreign Language Center Aug. 16 about North Korea and its nuclear weapons program. In the background is a 2014 photo from the NASA Earth Observatory showing a dark North Korea, “a regional black hole amidst South Korea and northern China,” according to Huntley. (U.S. Army photo by Patrick Bray/Released)

The role of China in North Korea

The North’s ally throughout the Cold War had been primarily Russia, Huntley emphasized. Today when considering North Korea one must also consider the role of China, which supports maintaining the status quo in Northeast Asia. The region is an economic powerhouse with a black hole, North Korea.

For years China has been expanding its economic zones outside of its own borders as an alternative to the U.S. dominated international order. This is an effort to marginalize the U.S. by looking west and uniting Eurasia and Africa under the Chinese model of globalization.

So, China is more interested in stability and therefore more concerned about a North Korea collapse than its nuclear program, or at least that is what they tell us, according to Huntley.

Huntley concluded by answering questions from the students concerning a reunified Korea, where North Korea gets its technology, how North Korea survives in the internet age, and U.S. strategy in dealing with North Korea. Huntley stated that in light of these recent events, most experts on Northeast Asia are still trying to determine how Kim Jong Un will shape the direction of the country.

The Obama Administration’s way ahead for the U.S. was a policy of “strategic patience,” which was unlike the more confrontational Bush Administration approach of the early 2000s. The policy suggested that the U.S. can afford to wait for North Korea to make its own decision to denuclearize.

“The U.S. has left a chair at the table for North Korea in the Six Party Talks and has waited for eight years,” said Huntley. “North Korea never came around.”

The Trump Administration’s policy is still developing, but Secretary Mattis emphasized that, “Kim Jong Un should take heed of the United Nations Security Council’s unified voice, and statements from governments the world over, who agree the DPRK poses a threat to global security and stability” and that “our State Department is making every effort to resolve this global threat through diplomatic means.”

Huntley’s teaching interests include nuclear, biological and chemical weapons proliferation and non-proliferation, and Northeast Asian security. He spoke as part of the FAO program’s monthly U.S. Army officer professional development program, which is a critical part of FAO training at DLIFLC. The monthly program is as an essential addition to the biannual Joint Foreign Area Officer Course Phase I, usually held in January and June.