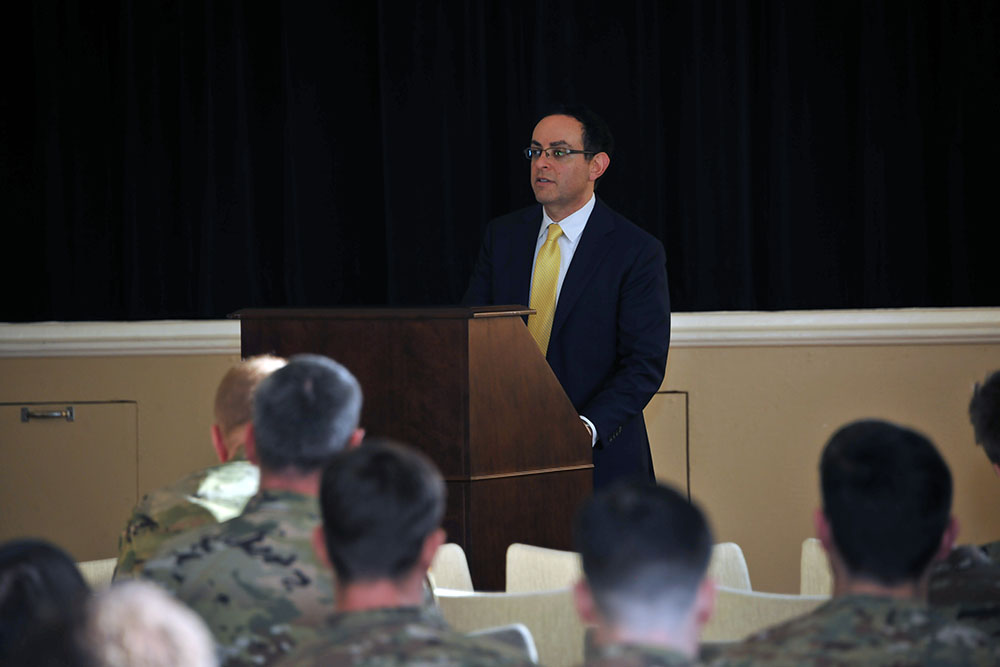 MONTEREY, Calif. – Dr. Guy Ziv, an associate professor at the American University School of International Service in Washington, D.C., spoke to Foreign Area Officers in language training at the Defense Language Institute Foreign Language Center Feb. 15 about current Israeli policy and the role of the U.S.

Coincidentally, Ziv’s lecture took place on the same day Israeli President Benjamin Netanyahu met with President Donald Trump in Washington, in which they spoke about settlements, the Iran Deal, the relocation of the U.S. embassy to Jerusalem from Tel Aviv, and the two state solution – two states for two groups of people. Trump has declared that he is not wedded to the two state solution, a change from U.S. policy, according to Ziv.

“U.S. support of Israel is one of the few bipartisan issues in Washington today and the reason is that the two nations are democratic and share common values such as self-determination, social justice, pluralism and multiculturalism,” said Ziv.

But the U.S. and Israel also have shared interests. Israel is considered a very dependable ally, from the Cold War to fighting radical regimes of today and in the prevention of proliferation of nuclear weapons, especially in Iran.

As the only democracy in the Middle East, Israel receives an annual aid package from the U.S., receiving about $38 billion in 2016. In return, the U.S. receives Israeli technology, which is considered well advanced in areas such as airport security and cyber security, along with intelligence sharing from the Mossad, the national intelligence agency of Israel. Intelligence sharing is considered one of the most valuable elements of the U.S.-Israeli relationship.

Ziv’s statement is derived from Gen. George Keegan who once said that “The ability of the U.S. Air Force in particular, and the Army in general, to defend whatever position it has in NATO owes more to the Israeli intelligence input than it does to any other single source of intelligence, be it satellite reconnaissance, be it technology intercept, or what have you.” Keegan was the former head of U.S. Air Force Intelligence from 1972 to 1977 and has publicly declared that “Israel is worth five CIAs.”

Between 1974 and 1990, Israel provided the U.S. with $50-80 billion in intelligence, research and development savings, and Soviet weapons systems captured and transferred to the U.S.

The biggest issue facing Israel today just may be the two state solution, said Ziv. A critical element of that is the two states will have to live side by side in peace. Israel and the U.S. both worry that Palestine could become a haven for jihadists.

Ziv compares the pro-settlement lobby in Israel to the NRA in the U.S., meaning that both lobbies have no real opposition. Palestinians are wary of new settlements. According to some Zionist Jews, all of Israel belongs to them as a Jewish homeland, but Zionism comes in different forms. Some pragmatic settlers would simply like to be compensated for leaving.

As for the Iran Deal, Netanyahu lobbied against it, but there has been no indication by the Trump administration of reneging on the deal, according to Ziv. As for now, we can only wait and see.

Ziv has a background in policy, having worked at the U.S. Department of State, on Capitol Hill, and for leading non-profit organizations that promote American involvement in Israeli-Palestinian peacemaking. He spoke as part of the FAO program’s monthly officer professional development speaker series, which is a critical part of FAO training at DLIFLC. The monthly program is an essential addition to the biannual Joint Foreign Area Officer Course Phase I, usually held in January and June.