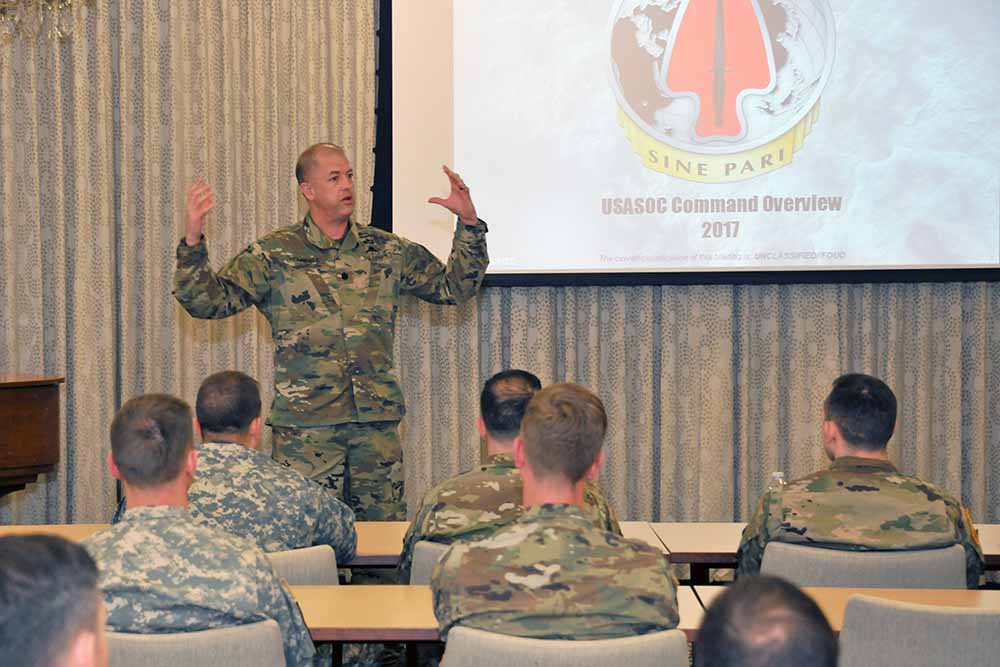 Lt. Col. Gordon Landale from the Naval Postgraduate School in Monterey spoke to Foreign Area Officers in language training at the Defense Language Institute Foreign Language Center March 15 about U.S. Army Special Operations and how it can work within a country team to advance U.S. priorities. (Photo by Patrick Bray, DLIFLC Public Affairs)

MONTEREY, Calif. – Lt. Col. Gordon Landale from the Naval Postgraduate School in Monterey spoke to Foreign Area Officers in language training at the Defense Language Institute Foreign Language Center March 15 about U.S. Army Special Operations and how it can work within a country team to advance U.S. priorities.

A country team is the foundation of a U.S. Embassy and includes many interagency personnel to promote diplomacy abroad. Some country teams are further augmented by the National Guard’s State Partnership Program. Special operations, which include U.S. Army Special Forces, Psychological Operations and Civil Affairs, can bring even more capabilities to the team, according to Landale.

Landale, with special operations experience in various theaters and joint task force duties with NATO, began his 21-year career as an infantry officer before going to Special Forces selection in 2001. During the qualification course he trained in a mock embassy, but it would take 15 years before he stepped foot into a real embassy in Tajikistan.

“Without the Defense Attaché, I would not have known what to expect,” said Landale, speaking about the importance of interoperability.

U.S. Government agencies along with the departments of State and Defense must collaborate to achieve U.S. priorities in a given country under the Integrated Country Strategy – the ambassador’s multi-year plan that articulates those priorities.

Peacetime engagements by special operations go hand-in-hand with the diplomatic relationships built by FAOs. Special operations has a diverse portfolio and are used for a variety of purposes during peacetime to identify and resolve pending crises or conflicts. Many of the conflicts occur in parts of the world plagued by disease, starvation, poverty and civil strife.

Though they have regional responsibilities, special operations troops must notify the embassy before conducting missions in a foreign country unless there is a designated operation, such as Enduring Freedom. For Landale, FAOs helped close the gap in Tajikistan between the country team and special operations.

Landale is a defense analysis graduate at NPS and the director of the Common Operational Research Environment Lab there. The CORE Lab researches the irregular warfare environment, which integrates geospatial, cultural, relational and other data for use by field operatives. He spoke as part of the FAO program’s monthly officer professional development speaker series, which is a critical part of FAO training at DLIFLC. The monthly program is an essential addition to the biannual Joint Foreign Area Officer Course Phase I, usually held in January and June.