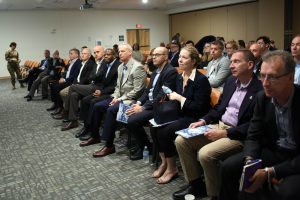 FVEY is a longstanding intelligence alliance among English speaking nations with roots dating back to the Second World War when U.S. and British codebreakers established informal ties.

“The benefit of the Five Eyes intelligence alliance allows us to develop closeness with our counterparts … and [enables] our strategic stance against Russia and China,” for example, said Lt. Gen. Scott Berrier, the director of the Defense Intelligence Agency. 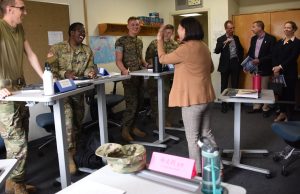 Members of the FVEY visit a Korean classroom. (Photo by Natela Cutter)

More than 50 participants from the intelligence fields of the five nations visited DLIFLC, received a command brief and observed Korean, Chinese and Russian service members studying their target language.

“It’s fantastic! The ratio of staff to students is phenomenal and it’s incredibly inspiring to see these young kids studying,” said Australian Maj. Gen. Michelle McGuiness, the deputy director for Commonwealth Integration who currently serves at DIA. “Looking at the immersive [environment] on day one, with native speaking instructors, they are encouraged to live the language and that is key,” she said. 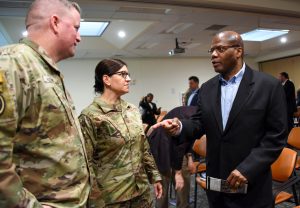 The group was hosted by the Honorable Ronald Moultrie, the Undersecretary of Defense Intelligence and Security, who is also a 1979 Russian language graduate. Every year the FVEY gather to hold discussions on subjects of mutual interest and concern, compare best practices and explore areas of intelligence cooperation. This year the gathering was held at the neighboring Naval Postgraduate School in Monterey.

“DLI is interesting because it is a blend of civilians and the military. It is obviously a conducive learning environment, everyone is smiling. Whatever you do, it is always about people. It takes time to invest, and this is important business,” said United Kingdom Air Vice-Marshal Tim Neal-Hopes, who explained that he has similar responsibilities to manage the linguist portfolio in the UK military.