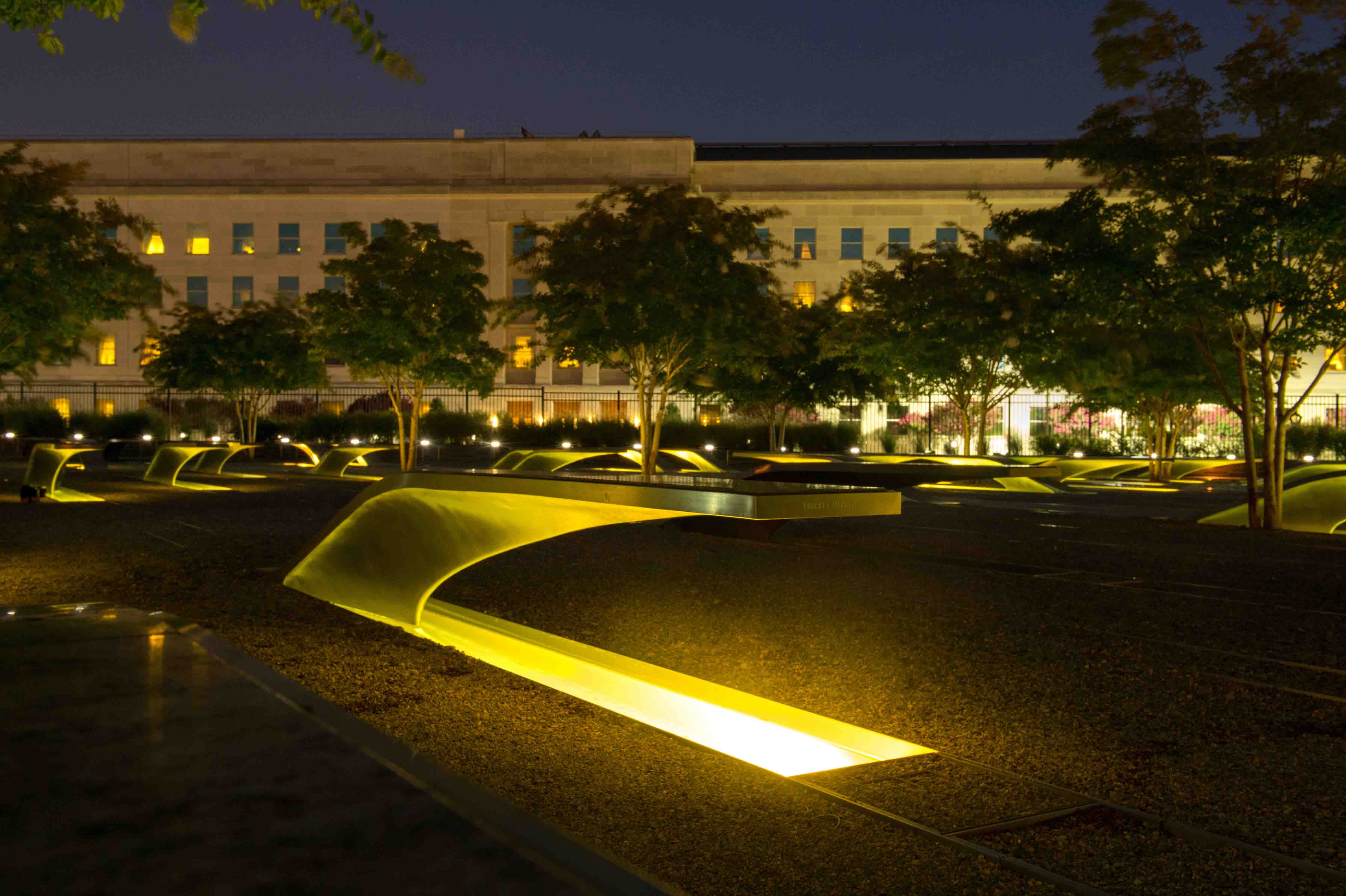 Lights illuminate memorial benches at the National 9/11 Pentagon Memorial Aug. 22, 2016. The memorial is dedicated to the 189 souls lost in the terrorist attack at the Pentagon on Sept. 11, 2001. A ceremony at the Pentagon will recognize the 15th anniversary of 9/11 attack on the Pentagon. (DOD photo by E.J. Hersom/Released)

MONTEREY, Calif. – My job at the Pentagon was to manage the Army’s Foreign Area Officer Program. There were five of us FAOs working together on accessions, training, and policy matters regarding Army FAOs. As part of the training side of our job, we worked closely with the Defense Language Institute Foreign Language Center to meet FAOs’ foreign language requirements. We also presented the Joint FAO Course twice a year at the Presidio of Monterey.

I recall a beautiful late-summer day, warm-not-hot, with the kind of achingly blue sky no cloud would dare appear in. I was at work in my cubicle, but the biggest thing on my mind was how to sneak out early and enjoy the day. Maybe go for a bike ride. Then, at 9:37 a.m., a Boeing 757 crashed directly beneath my desk. My cubicle was in Room 3D452 of the Army ring at the Pentagon, and the date was Sept. 11, 2001.

When American Airlines flight 77 struck the building, it hit the first and second floors and tunneled directly under my third-floor office. The explosion sent a fireball through the window next to my desk, the impact knocked me out of my chair, and the room immediately filled with thick, black oily smoke. My desk was at the back of a cubicle farm that held about 80 personnel, near the office of our division chief, Col. Mark Volk. Since we were at the back of the room, we knew no one was behind us, so as Col. Volk and I moved toward the exit we gathered up other people and ensured no one was left behind. 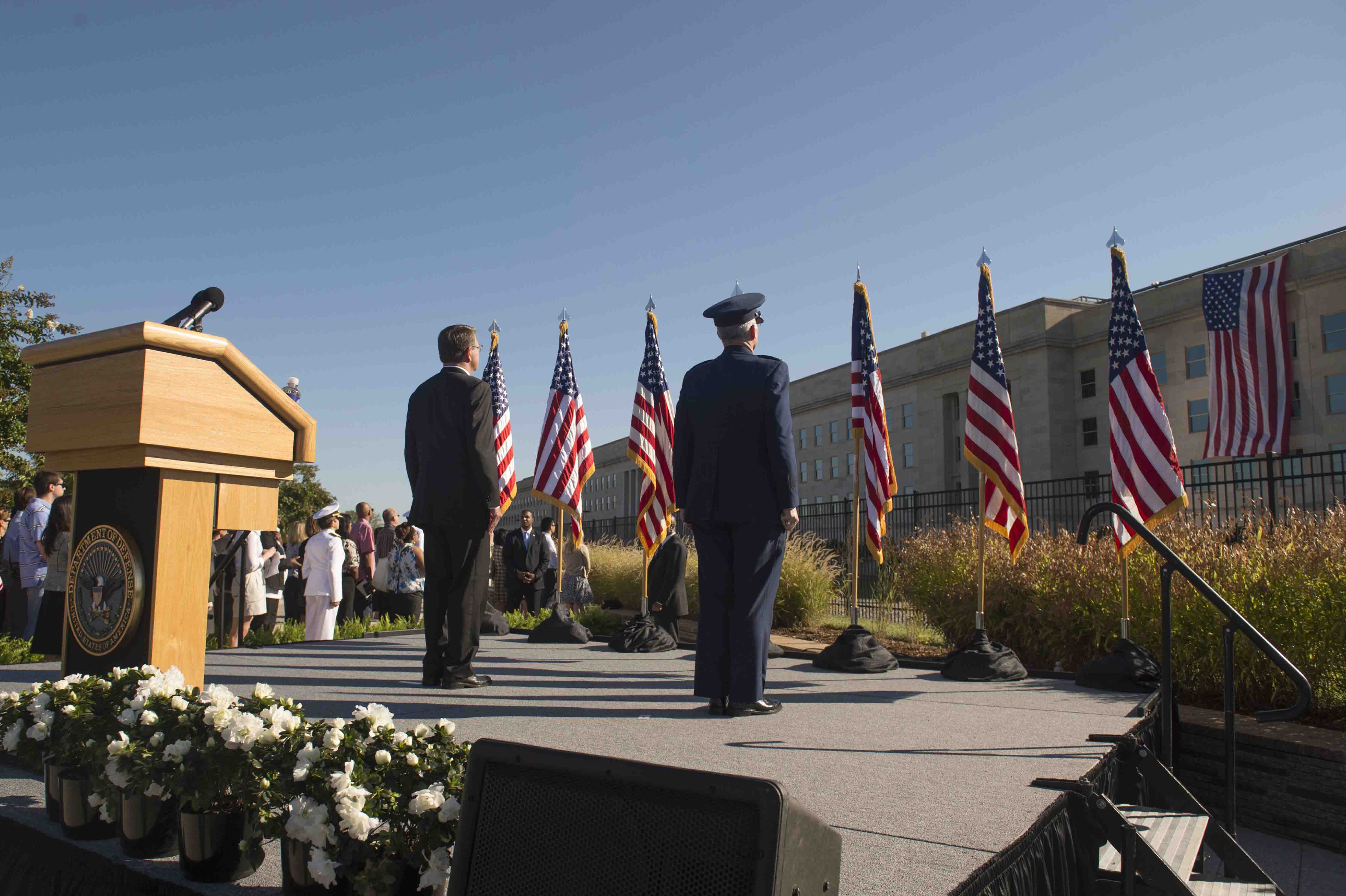 Defense Secretary Ash Carter and Air Force Gen. Paul Selva, vice chairman of the Joint Chiefs of Staff, face the flag that was placed on the Pentagon as they host a remembrance ceremony Sept. 11, 2015, at the Pentagon Memorial to honor the memory of those killed in the 9/11 terrorist attack. The ceremony was attended by family members who lost loved ones. (DOD photo by Senior Master Sgt. Adrian Cadiz/Released)

The smoke limited visibility to less than a foot, and debris made walking difficult, but other people had stationed themselves along the way and guided us by calling out to us, “Come toward me! Follow the sound of my voice! Watch out for the hole where the copier used to be!”

As we met each person, we told them the area behind us was secured and they joined us moving toward the door. Once we reached the main corridor it was much easier to move about. The fire doors had closed and were keeping the smoke out, and there was not much damage from the initial explosion (although the fire that was growing on the floor below us would eventually destroy the whole area).

I saw a lot of acts of heroism that day. People were helping injured coworkers or breaking down doors to free others trapped inside. I saw Col. Volk grab a fire extinguisher and run back into the smoke to check on the office next to ours. 189 people died when the plane exploded, but I am happy to say that everyone in my office got out okay.

When my tour with the Army Staff ended, I transferred to DLIFLC to be associate dean of what was then known as the European and Latin American School. A couple of years later, I took over as the FAO program director at DLIFLC. That job gave me the opportunity to train a new generation of FAOs, and ensure that our nation is well served by its FAOs for years to come.  I retired from that position in 2005, but remained in Monterey and visit DLIFLC often.