HMX-1 gets a little help from the language community

If linguists are the unsung heroes of the intelligence world, then language managers are the support that keeps them going.

Command Language Program Managers are responsible for linguists once they arrive at their new station. They help the linguists to train and maintain their language skills, from assisting them in their training schedules to being the liaison between the commander and the linguists. CLPMs also have a second goal, which is to encouraging anyone who has a language capability to test for their language. This, in turn, helps the military maintain a pool of available linguists who can support other Department of Defense missions as needed.

That second goal is where Master Sgt. Robert Snyder, counterintelligence chief at Marine Helicopter Squadron One, and the CLPMs met. 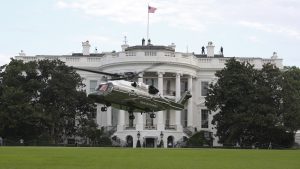 HMX-1’s mission is to fly the President, the Vice President and other VIPs on short-range flights. Those flights can happen anywhere around the world, making Snyder realize he had an opportunity to build up his Marines and help the mission at the same time.

Snyder speaks Spanish, having been raised in a bilingual family. “A lot of people [in the Marines] don’t know that they can get paid for languages like that,” he said. “They assume they can only get paid for Arabic or Chinese Mandarin.”

“It started out with me just being a master sergeant,” Snyder said. That is, helping Marines. “I was getting them to spread their wings and recognize the talents they have.” He began researching programs and how to get his Marines to take the Defense Language Proficiency Test.

That’s when he saw the connection.

“When we deploy in support of the President, we rely on the embassy to do translation,” Snyder said. If they had the personnel to be the translators, he thought, why not use them instead of a third party? “There are a lot of benefits on the operational security side, knowing that it was our own people” who would do the translating, he said.

Snyder began identifying Marines in his squadron who had exposure to a different language, like, for instance, a Marine who had lived in Panama for a year as a teenager. “We would inventory the squadron. We’d ask [about] their leadership. Are they a good Marine? Are they reliable? Are they good at doing things on their own?” If the answers were yes and if they were interested – the program is volunteer only – they would be sent to learn a new language or build on the language they had.

From there, Snyder went to Master Sgt. Ann Sagebiel, the 2641 military occupational specialty specialist for the U.S. Marine Corps and a former Defense Language Institute Foreign Language Center student. Sagebiel has experience not only as a linguist but also, in her current position, as a manager of the billets and training requirements for all U.S. Marine Corps cryptologic language analysts.

“It is rewarding to be able to advocate for language and Marine Corps CLAs at the DOD level,” Sagebiel said. “I get great satisfaction knowing that my office provides funding for them, which allows them to participate in training opportunities that they may not have otherwise.”

Thanks to her position and knowledge, Sagebiel was able to pass on information on policy direction and resources, and then secure Snyder a seat at the CLPM training at the Presidio of Monterey in July 2018. She also linked Snyder up to other CLPMs.

“HMX-1 deserves all the credit here,” Sagebiel said. “They recognized the importance of language to mission success, even though they have no formal language requirements.  They had the initiative to build a program and stand it up from scratch.”

“It was Ann Sagebiel’s guidance and the other language managers who brought me into the fold and helped me stand up this program” Snyder said. “I would not have been able to do it on my own,” That demonstrates the value of the community, he added, and it shows they can do great things when they come together and support others.