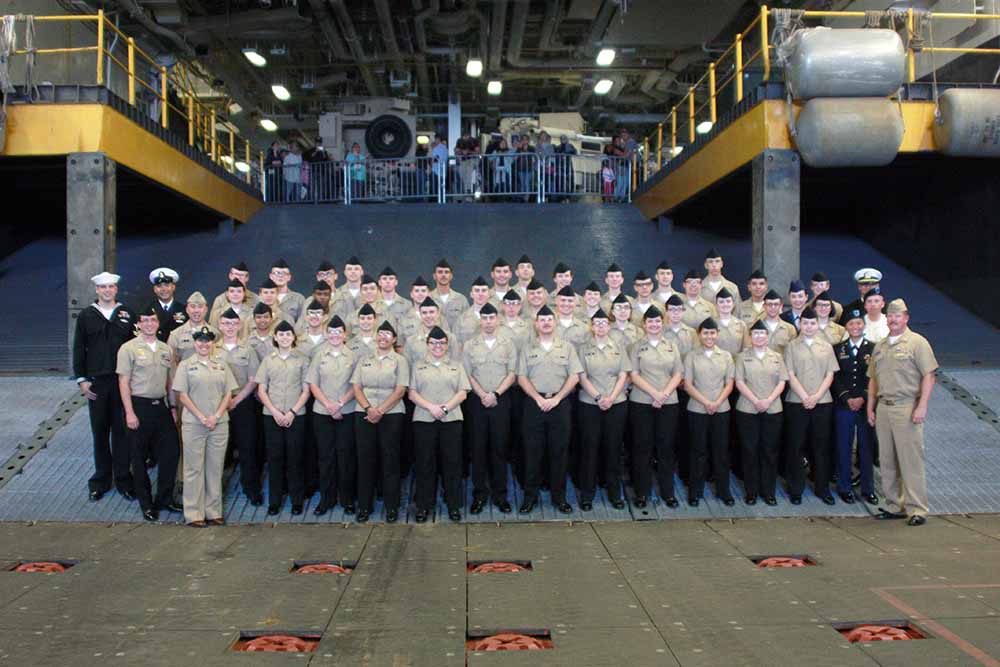 More than 60 students who are attending various linguist programs at the Defense Language Institute Foreign Language Center, met with the crew of the amphibious assault ship USS Essex (LHD 2) and received a tour of the ship’s operations spaces. Along with the public spaces, IWTC Monterey students were also able to get a glimpse inside the Ships Signal Exploitation Space, where they could potentially be assigned.

“It was a great experience getting to see what we do in the fleet,” said Seaman Paul Greathouse. “Most people don’t know what goes into our job, so it was nice to get answers to some of the questions I’ve had since I chose this rating.”

“Many of our newest Sailors are excited to deploy and utilize their new skills, but are unsure where they fit in the world of information warfare,” said Newsome. “We feel strongly that by giving our Sailors a glimpse of what their shipmates are doing, we can help increase their motivation to excel in language learning.”

This is the second time IWTC Monterey students have visited San Francisco Fleet Week activities. In 2016, students had the opportunity to attend Fleet Week and were also able to see a Navy EP-3E Aries II aircraft and meet with a crew from Fleet Air Reconnaissance Squadron One (VQ-1) at the Monterey Jet Center.

“Last year’s visit was such a huge success that we did not want to pass up this opportunity,” said Newsome. “We were thrilled that USS Essex agreed to open their brow and show our students parts of the ship that are not typically open to the general public.”

IWTC Monterey, as part of the Center for Information Warfare Training, provides a continuum of foreign language training to Navy personnel, which prepares them to conduct information warfare across the full spectrum of military operations.