After a two year-hiatus the Defense Language Institute Foreign Language Center held Language Day, a traditional celebration of language and culture for students from the Institute and young high school foreign language students from around northern California.

This year, the event was much smaller in scope and size in order to maintain health and safety protocols. About 2,500 visitors attended the event, held between 10 a.m. to 3 p.m. DLIFLC language students entertained the audience with more than 50 stage performances while about 15 food vendors served international dishes. 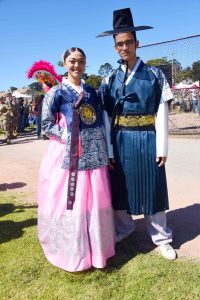 Students dressed in traditional Korean garb pose for a picture during Language Day.

A special treat this year was the presence of the 11th Armored Cavalry Regiment Horse Detachment from Ft. Irwin, California. Aside from participating in the opening and closing events, the horses and their handlers performed for an enthusiastic audience throughout the day. The 11th Cavalry Regiment was originally assigned at the Presidio of Monterey in from 1919 to 1941 when it was moved to Fort Benning, Georgia and eventually converted to a mechanized cavalry. 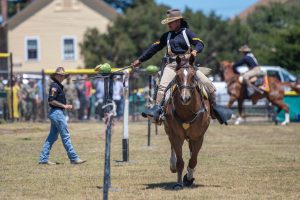 Demonstration by the 11th Armored Cavalry Regiment Horse Detachment were carried out throughout the day.

“It is nice to see all the different cultures together like this,” commented Gisselle Jiménez, a sophomore from Alvarez High School, Salinas, who came along with about 40 classmates. “This definitely gives you more of an insight into the world where we are used to seeing maybe one or two other cultures.”

“I was surprised to see so many people,” said Pfc. Kaitlin Naleweajko, who is studying Indonesian at DLIFLC. “This is a good change of pace for us because we are usually in school all day,” she said, referring to her intensive 36-week long language program.

Classes normally take place five days a week, six to seven hours per day in the classroom, with two to three hours of homework each night.

The Institute currently teaches 14 languages while attendance is normally around 2,500 students throughout the year. Military service members who attend DLIFLC come from four branches of the military and the Coast Guard. DLIFLC has graduated about 230,000 students since its inception in 1941.