Beating out two other contenders, this was the first time in seven years that the Hurlburt Field LTD won the award. Their accomplishments included providing over 25,700 student hours of foreign language education to 361 students in 11 strategically critical languages. This resulted in 100% of the students meeting or exceeding the graduation standard. 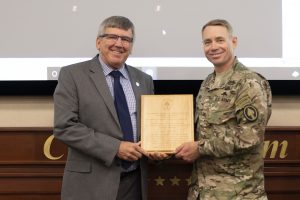 Col. James M. O’Brien, Training and Education Chief at SOCOM, presents the Special Operations Command Command Language Program of the Year Award for 2021 to Stephen Butler, the site director for DLIFLC’s Hurlburt Field Language Training Detachment during a ceremony at McDill Air Force Base, Florida, July 21, 2021. Between 1 July 2020 to 30 June 2021, Butler and his team provided 25,732 students hours of foreign language education to 361 students in 11 strategically critical language, all in the middle of a worldwide pandemic.

Stephen Butler, site director for the Hurlburt Field LTD, said their award came down to how they responded in the midst of the pandemic.

“These proficiency numbers are even more impressive when you take into account that all language and culture education was taught online for the entire reporting period,” he said. “We transitioned from being in the classroom to completely online in two days and did not miss one hour of instruction.”

The key, Butler said, was in how his team saw the virtual training as an opportunity rather than a challenge. And, he added, they discovered new lessons that they plan to continue to use going forward. For instance, the class was given a destination and then told to pack.

“Instead of just having them make a list,” Butler said, because they were home, they were given two hours to pack. “Then the students explained everything they had in their suitcase,” something they wouldn’t have been able to do had they been only in the classroom.

It also helped that in the calendar year of 2020, the LTD won civilian of the quarter in all four quarters. There are 14 instructors working under him, Butler said, so “there’s really 14 reasons why we won this award.”

Kim Leatham, the command language program manager for the 492nd Special Operations Wing, accepted the award with Butler at McDill AFB. She has been working for the language program for seven years and believes Butler is the best director they’ve had.

“He is a team player. He will find a way to say yes,” Leatham said. “He’s a great person to work for and with. It wouldn’t be possible to run a team like that without somebody like him.”

The team has dedicated this award to Tomas DeJesus, a 23-year U.S. Army veteran and fellow instructor, who passed away in January.

Ranging in size from a small number of instructors to more than two dozen permanent faculty, LTDs allow linguists to participate in language instruction at their assigned locations while carrying out their normal duties. Not only do LTDs reduce a linguists’ time away from their units and families, but they also provide service members convenient access to foreign language enhancement.