One of the most important aspects of resiliency when you are hit with curveballs in life is being able to get back up and keep moving. It’s not an easy habit to develop in this technologically advanced world, when it seems like the only effort involves a three-minute musical montage in a movie or video and suddenly you’re on the other side of the challenge.

The problem is, she says, we don’t see the hard work that goes into everyday life or the failures that go along with it. Instead, all we see are the end results. This is what is called Secrecy in Success.

“I don’t have a badge on my uniform. There’s no tab on my sleeve that says I got counseling,” she said. 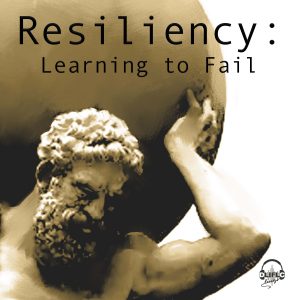 For new students at the Defense Language Institute Foreign Language Center, it can be even more challenging.

“It’s really hard to have perspective as an 18, 19-year-old,” said Johnathan Gajdos, dean of the Persian Farsi schoolhouse. One of the hardest parts of his job is sitting on review boards for students that are in academic jeopardy. Some students come to DLIFLC having been a “big fish in a small pond” in high school, he said, who didn’t have to work too hard to get A’s and B’s in their classes

“And now they’re finding themselves in a different academic environment where it’s a single course and it’s an effort-based rating system,” he said. “So, developing work habits and developing studying habits when you never really had to work hard in school is a real challenge.”

It doesn’t happen with just students. Anyone at any age can wrestle with this area of their lives. Just ask Sgt. First Class Matthew Peterson, an Army Ranger and current Chief Military Language Instructor, who struggled when he was a Pashto student at DLIFLC.

“I’m a very pragmatic person. I like to plan things meticulously,” he said. “When I was a student here the first time, I was really terrible about speaking because I would go, okay so this needs to be subject, object, verb. What’s my subject? What’s my object? Does my object agree with my verb? And I would make all those things perfect and by the time I was ready to say it, we were onto something else and I would never get that practice.”

It wasn’t until he was in Ranger school, recycled back to second phase, that he stopped worrying about failing and looking stupid. He just did it.

“The only way I’m going to learn, the only way for me to get better, is to just get out there and do it. Everyone else here is probably just as ignorant about what needs to be done, so I might as well take a chance. Just get out there up front, make an idiot of myself and let them correct me.”

From there, everything clicked for him and he went from struggling to succeeding. It was a lesson he’s applied to everything in his life.

“Ask and seek advice,” Peterson said, “but there’s a time where you just have to get out there and take a risk that you might fail. Failure isn’t a reflection of who you are as an individual. It’s not a metric of success.”

There might be a vulnerability in getting up. It takes courage to keep on moving when you feel like you’re a failure. As Klozer explained, “We live in this virtual world of perfection and we’re not afforded the opportunity to feel like it’s okay [to fail].”

In fact, failure is essential to human growth. “Understand that vulnerability is good,” said Peterson. “It’s okay to be wrong, it’s okay to be human.”

To hear more from other people who failed and picked themselves up, you can listen to DLIFLC Lingo podcast at www.SoundCloud.com/DLIFLC.