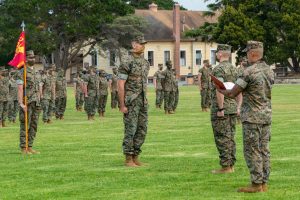 Marine Sgt. Christopher Ellis stands at attention along with the rest of the Marine Corps Detachment at DLIFLC while his Commendation Medal is read during a ceremony held at the Presidio of Monterey May 28, 2020. (Official DOD photo by Zach Frank)

A Marine with the Defense Language Institute Foreign Language Center was awarded for his heroic actions Thursday in a ceremony held at the Presidio of Monterey May 28, 2020.

The Marine Corps Detachment awarded Sgt. Christopher C. Ellis with the Navy and Marine Corps Commendation Medal, an award reserved for a service member who distinguishes themselves by heroic or meritorious achievement or service, for his life-saving actions in 2019.

“This is an awesome occasion in the midst of these unprecedented times to recognize the heroic actions of a Marine,” said Lt. Col. Jason Schermerhorn, commanding officer of MCD, during the ceremony

In January of 2019, Ellis was on his way to his language training at DLIFLC when he noticed a two-vehicle accident on the side of the road and stopped to check on those involved. 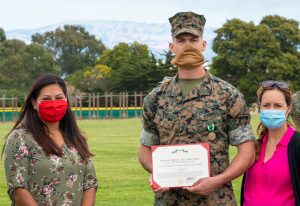 Vilma Perez (left) of Monterey stands with the Marine who saved her life, Sgt. Christopher Ellis and his wife, Carissa Ellis. Perez said she doesn’t remember the crash or the rescue, but she remembers waking up in the hospital to see Carissa Ellis visiting her with flowers in hand. (Official DOD photo by Zach Frank)

After assessing the vehicles, he found a woman, Vilma Perez, of Monterey, unconscious in the driver’s seat of a crushed car that was billowing smoke. Ellis, along with the help of another fellow Good Samaritan, broke window and pulled Perez to safety.

In explaining what he was thinking at the time, Ellis said, “I just knew decisions needed to be made and things needed to be done” as a capable young person on the scene.

Ellis and the Good Samaritan were able to get the unconscious Perez across to the other side of the road when the car became engulfed in flames.

“The actions he took showed exactly the Corps values, especially courage,” Schermerhorn told the Marines. “He didn’t just stand there, he took action.”