The holy grail of any big company is numbers. It’s a matter of practicality. Hard facts that don’t always tell the full story but look good for stakeholders and the bottom line. The best outcome happens when numbers and soft skills meet.

That is what has happened with the Marine Corps Detachment at the Defense Language Institute Foreign Language Center.

“It bothers me a little to focus so much on numbers,” said Master Gunnery Sgt. Willy Pascua Jr., the Senior Enlisted Leader of MCD. “We’re not trying to make numbers, we’re trying to develop better Marines.” 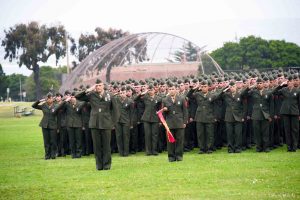 Marines stand in formation during a ceremony at the Presidio of Monterey. (DOD photo by Mission Public Affairs Office)

Those numbers are a bottom line that tells a story. The graduate completion rate for MCD has improved over the last four years. Since fiscal year 2016, the total number of students who graduated increased almost 7% to 88.6%. Further, in 2019, 94.5% of the Marine Detachment students who graduated met or exceeded the Defense Language Proficiency Test standards, a nearly 5% improvement since 2016.

Pascua attributes that improvement to a holistic approach, a fancy buzz word for something called the whole Marine concept.

“Everything is everything,” said Pascua. Meaning everything – every touch point, every interaction with the Marines – is an opportunity, he said, “a chance to train not just the body but the mind and the soul.”

Matthews believes this holistic approach starts at the beginning with the recruitment process.

“Four years ago, prospective linguists were contracted to become linguists,” before they went to boot camp. “Now,” he said, “respective recruits are interviewed while they’re at boot camp.” This interview process also includes possible experience in their language, interest in learning a language and their interest in the career field, regardless of how good their Defense Language Aptitude Battery scores might be, which must be a 110 or higher to be a linguist with the Marines.

“Based on that information, a call is made on whether or not they will come here to study to be a linguist or go into some other field of intelligence,” said Matthews.

Once the Marines arrive at Monterey, they have 30 to 60 days before their classes start.

“I think the success factor for our Marines in particular is that they spend anywhere from a month to two months before they start class,” said Lt. Col. Jason Schermerhorn, commander of the Marine Corps Detachment at the Presidio. “Having that time really allows us to do some really good training with them and instill expectations.” They learn within a week of arriving what their language will be and are immediately given tutoring and exposure to the language.

They go through MAT, or Marines Awaiting Training, while they wait for their classes to start. “We have a renewed focus on building skills, habits and behaviors that will make them successful,” said Pascua. Those courses include things like a Lance Corporal seminar, Prime for Life and a substance abuse program.

“I think that ties into the type of character we want to build into our Marines from the beginning,” said Pascua.

Lance Cpl. Joseph A. Patrick, a Pashto student at DLIFLC, has been at the Presidio for over a year. He went through the MAT training when he first arrived. “That program gives Marines a chance to relax a bit from all the training,” he said, explaining that between their time at boot camp and Marine Combat Training, they are in training for over 4 months. “You begin to think a little more as a Marine and as a person and not as a recruit.” 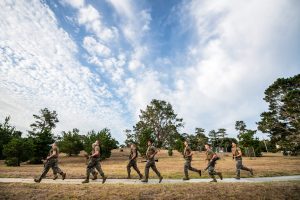 Marines running at the Presidio of Monterey. Physical training is an integral – and frequent – part to being a Marine. “I would argue that a lot of our approach is focused on the physical parts in order to create habits that tie into their emotional and mental resiliency as well,” said Pascua. (DOD photo by Masrcu Fichtl Presidio of Monterey Public Affairs Office)

Another opportunity to interact is the physical training, an integral – and frequent – part to being a Marine. “I would argue that a lot of our approach is focused on the physical parts in order to create habits that tie into their emotional and mental resiliency as well,” said Pascua. “PT is not just an example of physically training the body. It is very often that we include values-based discussions on the back end of PT as a mentorship opportunity. It’s something we believe builds cohesion.”

And then there is Marine Corps Martial Arts Program, or MCMAP. “The MCMAP program is built on instilling our warrior ethos as Marines into everything we do,” said Pascua. “The Marines have given us the feedback that MCMAP has been huge for them as far as building some kind of resilience but also just releasing some stress in the middle of their day.” It’s one more interaction they get to have with the Marines, he said.

When they finally begin their language training in the classroom, even though MAT might end, the mentoring doesn’t. “It’s not just classes that we give once,” explained Pascua, “but it’s follow through with nearly every interaction we have with our Marines.”

They also have peer-to-peer training. “We try to drive a lot of our efforts to be as decentralized as possible,” said Pascua. “Meaning our tutoring program is designed and run by the Marines themselves.” They identify who needs what specific types of tutoring and identify those tutors that match that need. The leadership discussions and ethics-based discussions are peer-to-peer as well.

“We’ve noticed that, as we build leaders, we build service members who want to own the mission,” said Pascua.

“It’s really remarkable when you give them commander’s intent and leeway, what they’ll come up with,” added Schermerhorn.

Patrick is living proof of that kind of ownership and, as Pascua calls it, buy-in. “We really try to focus on building leaders in the lower ranks,” Patrick said. In his platoon, he added, they are running it as if he and the other E-3s are already corporals. “We’re students, but we are stepping up and taking on those responsibilities in addition to what we’re doing in class.”

In other words, all these trainings and team building opportunities tie into each other to form a big-picture approach to learning so that the students give their all. And along the way, become better, stronger Marines. After all, at the MCD at DLIFLC, everything is everything.