The Maxwell Air Force Base Language Training Detachment at Air University is hosting a ‘Belt and Road Initiative’ training event June 7-18, to take a closer look at China’s global economic and political objectives. The co-sponsors of the event are Air University, the China Aerospace Studies Institute, Air War College, Army War College and the Air Force Culture and Language Center.

The “Belt and Road Initiative” is perhaps China’s greatest international economic ambition, aiming to stimulate economic development in a vast region covering sub regions in Asia, Europe and Africa with deep investments in infrastructure such as highways, skyscrapers and ports. This region, stretching from East Asia to Europe, accounts for 64 percent of the world’s population and 30 percent of the world’s gross domestic product, dramatically expanding China’s influence.

While the BRI appears to be continuing China’s upward economic growth, questions remain concerning the initiative’s timing, its true nature and how it will affect the global marketplace and security initiatives. 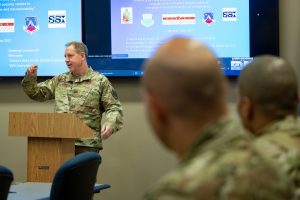 Lt. Gen. James B. Hecker, Air University commander and president, was on hand to welcome the Language Enabled Airmen Program scholars to the training event. In his opening remarks, he explained that this course is an effort to sharpen focus on the great power competition with China.

“In this time of strategic competition, it is more important than ever to arm our service members with the current knowledge and language skills to better understand our adversaries and strengthen communication among partner nations,” Hecker said.

During the training event, LEAP scholars will undergo intensive study of the BRI in their target language and associated regional culture. Speaking in either Chinese Mandarin, Spanish or French, the scholars will focus specifically on China’s initiative within the U.S. Indo-Pacific Command, U.S. Southern Command and U.S. Africa Command areas of responsibility. They will attend lectures and participate in discussions with instructors to understand Chinese global political and economic influence.

While participating in guest lectures on topics ranging from China’s Belt and Road to diplomatic relations with Taiwan, China and the Caribbean, the 19 LEAP scholars will break into smaller workgroups of two or three during the two weeks to prepare final projects for the last day of the course. The final project will be a 10- to 15-minute presentation in their respective language.

“This event is an excellent demonstration of how we can combine the strengths of multiple institutions to innovate in language, regional expertise and culture education,” said Dr. Thomas Stovicek, LTD site director of DLIFLC’s Continuing Education Field Support division. “Great power competition is something that touches every theater of operation, and I believe the scholars will come away from the course with a new perspective on how their advanced language skills are a powerful tool for analyzing diverse perspectives on complex global themes.”