MONTEREY, Calif. – Fourteen staff, faculty and family members of the Defense Language Institute Foreign Language Center achieved the dream of a lifetime by finally becoming American citizens during a naturalization ceremony held at the Presidio of Monterey Sept. 5.

“The road was long and painful,” said DLIFLC Associate Professor Dominique Marie Fontana, who was naturalized in the ceremony along with her husband, Richard. “We had encountered many obstacles that we had to overcome, many demons that we had to fight, but we were finally victorious. The question ‘Where are you from?’ does not offend us anymore, we take it as an acknowledgement of our identity. We are definitely part of the American melting pot.” 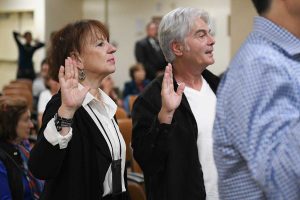 Staff, faculty and family members of the Defense Language Institute Foreign Language Center achieved the dream of a lifetime by finally becoming American citizens during a naturalization ceremony held at the Presidio of Monterey Sept. 5.

Fontana immigrated with Richard in the mid 1990s after responding to an ad in a local newspaper that was looking for a schoolteacher for an international school in Denver. The couple moved, leaving behind their beloved Brittany in the west of France to chase their American dream. However, they soon realized that dream is not always easy to attain. Facing cultural and linguistic challenges, in spite of years of training in English, the Fontanas found it difficult to acclimate to their new American life.

“The American language and the accent were very different from what I had learned at school,” Fontana said. “I suddenly saw myself with my ten years of English on a raft, drifting in the American ocean.”

Fontana and her husband managed to adjust to their new life in the United States, but after moving to Los Angeles and not being able to find a new job, their visas were about to expire. It took thousands of dollars and a grueling legal fight before they were able to get their green cards in 2014.

Later Fontana started to work at DLIFLC, where she was able to develop her career as an associate professor at the European and Latin American school.

This is a story many immigrants share on their path to becoming citizens of the United States. Like Fontana, 13other members of the DLIFLC community also became citizens, representing a milestone in their life that they celebrate with pride.

“DLI offered us its protection and believed in us. Now it is our turn to show our gratitude and to celebrate this great honor here, in this unique and beautiful place,” said Fontana. “By becoming American citizens together, Richard and I renew our vows, swearing to be committed to each other, to be faithful and loyal to the country, and never forgetting our struggles that have led us to this very day when we can officially call this country our own.”