DLIFLC leadership called for the stand down, which was originally scheduled for January 2021, to be held early based on concerns that restrictions related to COVID-19 mitigation efforts were placing unusual stressors on service members enrolled in one of the military’s toughest training programs. 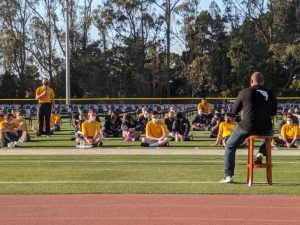 Sailors attached to Information Warfare Training Command (IWTC) Monterey recently participated in a base-wide suicide prevention stand down, coordinated by the Defense Language Institute Foreign Language Center onboard the Presidio of Monterey. IWTC Monterey, as part of the Center for Information Warfare Training, provides a continuum of foreign language training to Navy personnel, which prepares them to conduct information warfare across the full spectrum of military operations. (U.S. Navy photo/Released)

Students went to class as normal during the mornings of two-day event, but were released to their individual units in the afternoon to participate in presentations and small group discussions. IWTC Monterey staff also participated the week prior in “train the trainer” suicide prevention sessions.

The stand down was focused around a series of presentations by Kevin Hines, who tells his story of surviving a suicide attempt, when as a young man, he jumped from the Golden Gate Bridge.

“Mr. Hines is a survivor of a suicide attempt that took place 20 year ago when he was 17 years old,” says Fire Control Technician 1st Class Michael Clark, IWTC Monterey’s suicide prevention coordinator. “He tells his story and what was going through his head at the time. He talks about how once he committed to jumping from the bridge, he immediately regretted his decision.”

Following Hines’ presentation, Sailors were broken up into small groups to engage in discussions facilitated by IWTC Monterey staff members.

Acosta goes on to describe sources of stress for his Sailors: fear of failure, feeling isolated, and facing difficult academic challenges.

“We discussed areas of common ground and how we can use common experiences to build a team,” added Acosta.

Clark reported that he received overwhelming positive feedback from the students.

“You could tell there was an emotional impact,” said Clark.

The stand-down concluded with a question and answer session with Hines.

Seaman Alison Chipley, a student at DLI stated that, “Mr. Hines’ story was informative and eye-opening to those who have had no experience with mental illness or suicidal ideation.”

She went on to describe how Sailors continued to talk with one another about the presentation, even outside of the group discussions.

“The time that we had to discuss Mr. Hines’ story definitely opened the group up to one another,” added Chipley. “It definitely made us stronger as a team, even beyond the topic of suicide.”

IWTC Monterey, as part of the Center for Information Warfare Training (CIWT), provides a continuum of foreign language training to Navy personnel, which prepares them to conduct information warfare across the full spectrum of military operations.

For more on Information Warfare Training Command Monterey, visit https://www.netc.navy.mil/IWTCMonterey and http://www.monterey.army.mil/Service_Units/IWTC_Monterey.html, or find them on Facebook.