Neuroscience and memory: simple methods for a complex problem

Every instructor since the beginning of time has asked how they can help their students understand and remember the material. Instructors at the Defense Language Institute Foreign Language Center are no different. 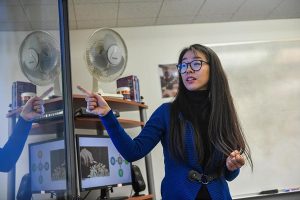 Instructor Siyi Gao in the classroom. Photo by Leonardo Carrillo.

One DLIFLC instructor has a few ideas. Siyi Gao, a team lead instructor for the Chinese Mandarin schoolhouse, is a firm believer in mind and concept mapping.

“You can think of [this kind of] mapping like a road map,” said Gao. “If you have a road map, you know there are a lot of ways to go everywhere, but they start from somewhere.”

For example, write the word “apple” on a piece of paper. Then make a line from “apple” to a new, related word, “seed.” The line represents the connection of apples having seeds, or coming from seeds. More connections can be made from there to create an assortment of words and ideas related to it. 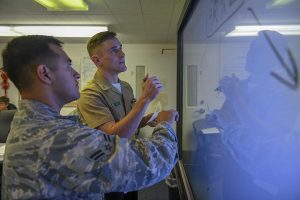 Siyi Gao’s students work on a language task in the classroom. Photo by Leonardo Carrillo.

Concept maps can be more complicated, but allow for more creativity and freedom. You start in the same way as a mind map, but after you make a connection, you can create further links away from the central idea. For example, using the previous apple mind map, you can connect a new word, such as “soil” to the word “seed,” expanding the map into new directions.

Gao says people tend to think that memory is like a photograph. You take a picture of the information and store it in your mind where you can then withdraw it whenever you want it.

Except that’s not how it works.

“Memory is more like you take a picture, tear it up, and then you think you’ll store it somewhere, but you can’t because it’s already torn up. So your memory can never be restored like you want it to,” Gao explained.

The idea is that torn-up pieces of the memory are stored into different parts of the brain and some even aren’t stored at all. Mind and concept mapping are a means to help bring together all of those pieces and recreate the full picture.

Studies have shown that using concept and mind mapping techniques on new material helps students retain information for longer than traditional study habits such as repetition and re-reading. In one study done in 2002, researchers found that students who used mind mapping to study new material were able to retain the information 10 to 15% better after a week than the students who used traditional study methods.

While that may not sound impressive, imagine compounding these gains over 15 month-long programs such as Mandarin Chinese, Korean or Arabic. 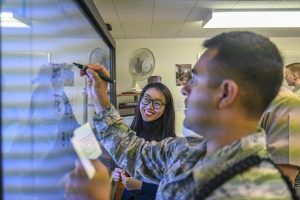 Instructor Siyi Gao works with her students in the classroom. Photo by Leonardo Carrillo.

“It’s very crucial here, because [of] not only the speed, but also the quantity of materials in each lesson. If you don’t mind map, you’ll quickly lose it, said Seaman Jacob Hill, a student in Gao’s class. Hill also said that mind mapping doesn’t just help him with studying, but also tackling real world problems by breaking them down into smaller components.

“When I hear ‘accident’, [for example], I immediately know these are the topics I need to listen for [and] these are the details I need to write down,” said Petty Officer 2nd Class Jade Tedmon. She explained that mental mind mapping improves her listening skills by forcing her to focus on the correct subject matter around the individual words she hears.