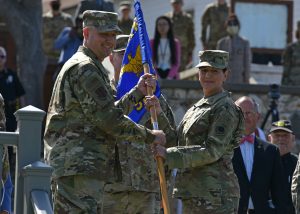 Air Force Col. Jennifer Saraceno accepted responsibility as the assistant commandant of the Defense Language Institute Foreign Language Center in a change of command ceremony held at the Presidio of Monterey, July 23, 2021. Saraceno also took over as the new commander of the 517th Training Group.

Saraceno came to DLIFLC from Washington, D.C., where she was executive officer to the Director of the Defense Intelligence Agency. As an intelligence officer, Saraceno has deployed in support of and led intelligence operations for multiple contingencies. In her speech to the students and staff, explained how important the DLIFLC mission is to the global force. 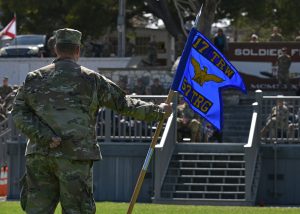 “It is an absolute honor…to have this opportunity to lead this group charged with developing Airmen and training linguists who will go on to execute missions providing critical information to the war fighters and to our national decision makers. Make no mistake, whether you are a student learning a new language or a permanent party training, developing and inspiring this future force, what you do here is vitally important to the joint force and global operations.”

Kelley’s next duty station will be in Washington, D.C. In her speech at the ceremony, she welcomed Saraceno as the new assistant commandant where, she said, “you will be part of another phenomenal team accomplishing herculean efforts on a daily basis. I couldn’t be prouder of DLI’s accomplishments over the last two years.”

DLIFLC is regarded as one of the finest schools for foreign language instruction in the world. The institute provides resident instruction in 15 languages to approximately 2,500 military service members, five days a week, seven hours per day, with two to three hours of homework each night. Generally, students spend between 36 and 64 weeks at the Presidio, depending on the difficulty of the language.