WASHINGTON, Dec. 21, 2016 — A new display at the Pentagon honors military officers who serve as regionally focused experts in political-military operations with advanced language skills, cultural understanding and the ability to advise senior military and civilian strategic decision-makers in an era of persistent conflict. 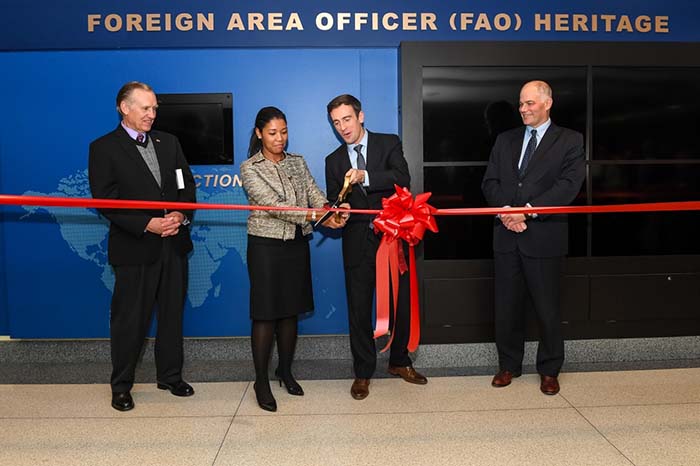 The Defense Language and National Security Education Office dedicated the Foreign Area Officer heritage display Dec. 12 at the apex between corridors 7 and 8 on the second floor of the Pentagon.

The ceremony commenced the annual awards program for foreign area officers to recognize the capabilities and accomplishments of current and former FAOs from all of the services.

The display in the Pentagon is the first of its kind to recognize the contributions of FAOs to DoD and its allies and partners, officials said.

“As you walk through the FAO heritage wall display, you will see the history of FAOs ensuring readiness within the Army, Marine Corps, Navy, Air Force, and Coast Guard,” Feehan said. “FAOs are prepared to apply their strategic focus and regional expertise to advise senior leaders and develop and coordinate security cooperation.”

Almost 2,600 FAOs are on active duty in more than 140 countries, and their history extends to before World War II. No two FAOs fulfill the same duty, Banks said, and each serves a unique role.

“They build bridges across cultures, languages, nations and organizations and serve the critical role of capacity and stability building to ensure military-to-military relationships keep an open line of communication during times of turmoil,” she explained. From defense attaché and political-military planner to arms-control specialist and liaison officer, she added, FAOs complete their overseas tours with Joint Staff, major commands, unified combatant commands and DoD agencies.