Preparing Soldiers for the future with resiliency

When Lt. Col. Matthew Upperman, commander of the 229th Military Intelligence Battalion on the Presidio of Monterey, assumed command July of 2020, the COVID-19 pandemic was in full swing, with the many local businesses shut down, all classes taught remotely and a potent mix of fear, restlessness and frustration on the rise.

“Right when we took over is when [DLI] really started feeling the effects of COVID,” Upperman said. “The dream that it was going to go away soon kind of pushed back on us. We knew that we needed to do something.”

While a variety of options have since been utilized to help mitigate some of the stress, one of the most helpful has been the two-week Master Resiliency Training held for the 229th MI BN cadre in February 2021.

“We’ve had a lot of folks who, with the pandemic and the stress of class, were feeling the effects and we wanted to ensure we were helping folks the best we could to become resilient,” said Upperman. 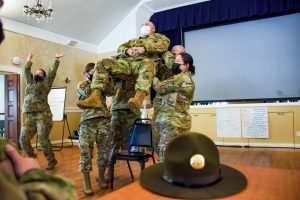 Army cadre participate in train-the-trainer resiliency exercises designed to help understand and talk with service members at DLIFLC who have been undergoing stress during the pandemic. Sgt. 1st Class Huiying Liu, (right) says that one of the activities was thinking of a fun way to strengthen team work that included lifting a team member in the air. (Photo by Natela Cutter)

Not to be confused with the monthly core resiliency training requirements for all Soldiers, this course is a train the trainer program. As a Level One MRT, these 23 cadre who took the training, can now teach the students the methods they learned in the course.

During the two week event, the MRT mangers taught skills and competency each day, as well as teachbacks, a chance for the cadre to practice teaching to a small group of people who would then give their cohorts feedback on how to improve.

When Staff Sgt. Ivah Henry, a drill sergeant with the 229th, did her teachback, she used the ATC, or Actions, Thoughts, Consequences, lesson. She gave an example of when a Soldier refused to go to formation.

“My initial emotion was anger,” she said. As a result, she and the Soldier had a confrontation. Henry said her first thought was an emotional response labeled Trespass. “That’s when someone has crossed you or someone has wronged you in some way,” she explained. The more you practice this self-reflection, she said, the more you’ll be able to recognize why you think or do things a certain way. A self-awareness that, though necessary, takes time to develop.

“I felt like [MRT] is really needed here as a drill sergeant,” said Henry. “They are young Soldiers and don’t know how to process how they feel and what they’re thinking and maybe their response was not corresponding to their reactions.”

First Lt. Saman Kiani, executive officer at Echo Company, also took the MRT. He, on the other hand, doesn’t work with enlisted students.

“My demographic is different. I work with foreign area officers and E-6 and above,” he said. “We are checking below, but who is checking up?”

For him, the chance to be a force multiplier at every level is heady. “I want to say I was enlightened when I took the training,” he said.

Kiani said it helped that they had what is called “Vegas rules.” What is said in training stays in training. He said it allowed him to open up more to talking about personal things, like his core values and his beliefs.

“One thing I’ve struggled with a lot is my empathy and my perspective because my experiences are so different than a lot of people’s,” he said. “So, if I look at a situation as I think people should be, or as I believe the world is, those things can be productive but they can also be counterproductive. If I don’t step aside and look at it from another perspective, that can be damaging on a lot of levels.”

The Master Resiliency Training prepares the Soldiers to face the challenges rather than reacting to the experiences of the challenge. “It’s like an inoculation before the challenge,” said Klozer, who has been part of the MRT program for nine years. She took her Level One certification in 2012 and it was an epiphany for her. 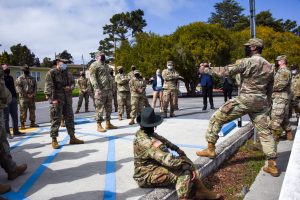 Soldiers signal they are ready to go back to MRT class after a breathing exercise designed to help relieve tension and channel their energy, a technique that is part of the two week train-the-trainer event held at the Presidio of Monterey. (Photo by Natela Cutter)

“I was always the optimist, the let’s-do-this person,” she said, “but now I had some science in my back pocket to help me with that and get people to come along on the ride.”

The MRT program is open to all branches, something that she and her team of performance experts are happy to share because “all the branches are starting to peek around the corner” to get deeper into this kind of training. But it comes with a caution.

“This kind of training isn’t a silver bullet,” Klozer said. “I’m not invincible. I still have my bad days, even though I’m a level 3 with this in my face every day.” The important part is teaching service members to be self-aware.

“MRT is helping service members of any age and [at] any stage of their career to be more self-aware of their thoughts and what motivates them and their reactions to them,” she said, skills that build resiliency through self-awareness, self-regulation and optimism.