DLIFLC held a Memorial Day Ceremony at the Presidio of Monterey in person for the first time in two years, with all four branches of the military and the Coast Guard present on Soldier Field May 26.

“For many of us, today is a particularly haunting day that carries with it a particular grief. Memorial Day is the day we set aside to remember our fallen, to reflect upon their loss,” said Defense Language Institute Foreign Language Center Commandant Col. James Kievit. “This is a day to recommit ourselves to the joint truths that make us who we are as a combined military fighting force.” 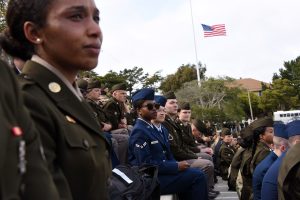 DLIFLC students listen to the guest speaker during the Memorial Day Ceremony.

Initially known as Decoration Day, Memorial Day in the United States originated in the years following the Civil War and became an official federal holiday in 1971. Kievit explained to the audience that Americans were not the first to honor their fallen with an observance, but that the practice dates back to 431 BC when the Athenian general Pericles delivered a funeral speech praising the sacrifice of those killed in the Peloponnesian War. 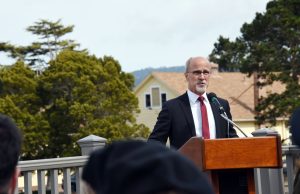 “Those who died while in service to our country deserve all of us taking a moment today to remember them, to honor them, and to understand that we all serve for reasons bigger than ourselves,” said Deppert, addressing all in attendance.

Since 9/11, DLIFLC has memorialized 35 graduates who made the ultimate sacrifice for their nation while in uniform.

Emphasizing that honoring the fallen is more important than ever, Deppert said, “Our country has formally declared war 11 times in our history and fought in numerous other conflicts. Without going through every battle loss, I would share that the United States has lost just under 1.2 million service members throughout our history.