Revamped Air Force FAO program gets a boost at DLIFLC

With six languages to his credit, a degree in linguistics and 11 years as an officer in the U.S. Air Force, it’s almost a given that Maj. Brendan McKenney, the director of operations at the 311th Training Squadron, would become a Foreign Area Officer.

“I knew I wanted to be a FAO pretty much from when I joined the Air Force,” said McKenney, who originally commissioned as an intelligence officer. “I really liked how it complemented the Intelligence [career field].” Because being a FAO, as he explained it, is a “later-in-career switch,” McKenney tailored his intelligence career development toward his end goal.

Up until this year, McKenney’s time as a FAO would have been limited to every other tour. For instance, he might go to the Moroccan embassy as a FAO, back to the U.S. as intel, and then back to an embassy, this time in France. The problem with this path is that McKenney would have had to switch back and forth between two different Air Force Specialty Codes and essentially cause him to miss certain milestones and deadlines that could hamper his progression in rank.

In 2019, the Air Force issued a review of the FAO program. The end goal of the review was to make best use of the most important asset they have: their people. 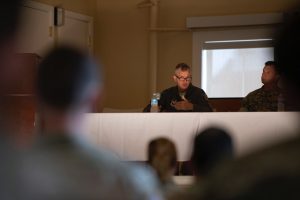 “We have been good at sending people around the world to go to schools, to go to exchange assignments, to go on overseas assignments to learn languages,” said Col. Lawrence Pravecek, chief of the International Airmen Division.

“But we have not done a good job of taking advantage of the resources of our people,” he said, during a talk with more than 60 Air Force FAOs at the Weckerling Center on the Presidio of Monterey, on June 21.

As a result of the review, the Air Force approved significant changes to the FAO program and the management of their careers. It is a move that lets the Airmen develop skills in their core career field of FAO, while still maintaining operational relevance in their secondary career field.

“Focusing development on International Airmen skills and experiences, rather than challenging officers to hit milestones in two career fields, is more important than ever…” said Deputy Under Secretary of the Air Force, International Affairs, Kelli Seybolt.

This change means that the Airmen who voluntarily switch their primary AFSC to 16F/16Z, or FAO, will no longer have tours alternating between their two competing career fields. Instead, they will do two tours as a FAO and then back to their secondary career field, allowing them to hone their skills and effectiveness without concern that they might be missing out.

According to the SAF/IA office, this new construct will also be a more efficient return on their investment. Under the previous system, the manning ratio was 2.3 trained FAOs per billet. With the new system, the ratio will now be 1.5 to 1.8 ratio per billet.

“We’ve put a lot of effort into training our FAO’s right,” said Pravecek. “We are trying to do a better job.”

In conjunction with this change, the 517th Training Group opened up a new office tailored specifically toward Air Force FAOs, complete with a new full-time FAO director, Lt. Col. Dan Wilcox, who was instrumental in coordinating with embassies around the world. 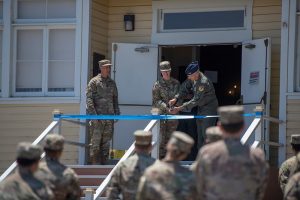 The director position is a big deal because up until recently, it has been filled part-time. Now, Wilcox explained, there is one point of access without sending people to different places.

“They wanted to bring in a FAO who has experience, who has gone through what they are about to go through,” Wilcox said, which is important for mentoring.

At the ribbon cutting ceremony Col. Stephanie Kelly, the assistant commandant of the Defense Language Institute Foreign Language Center and commander of the 517th Training Group, thanked everyone for helping to mark an event “that is really many years in the making. We have a small footprint here [at DLIFLC] but it’s a mighty footprint,” she said.

As for McKenney, whose primary AFSC is now that of a FAO, his next move is to Paris, France, where he will spend nearly two years continuing his overseas developmental training at L’Ecole de guerre. As he explained, the school is essentially an Air War College, where he will be entirely immersed in the French language.

McKenney’s next two follow-on tours will most likely be in his capacity as a FAO, something only made possible thanks to the Air Force recognizing the need for deliberate professional development with a strategic international perspective.

“All of us volunteered to serve,” said Pravecek, “and now we ask for volunteers to help build a new AFSC that is tailor-made to provide the internationally-minded officers that our nation needs.”