MONTEREY, Calif., – Maj. Gen. Charles W. Hooper, the senior defense attaché at the U.S. Embassy in Cairo, Egypt, shared advice and some of his life experiences with Foreign Area Officers at the Presidio of Monterey Jan. 13. 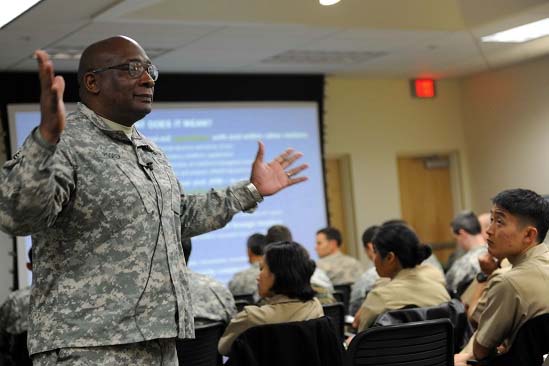 A Joint Foreign Area Officer Course is organized each year by the DLIFLC FAO office, gathering officers from all four branches of the military for several days to teach new FAOs and their spouses about their future career path and what will be expected of them while working abroad.

“You (are expected) to act as a combat multiplier…FAOs are always shaping. In the Army we call it ‘Prevent, Shape and Win,’ …the essence of your talents and your skills is to shape that strategic environment and hopefully prevent the possibility or the utility of arms,” said Hooper, to more than 100 officers.

As regionally focused experts, FAOs normally receive foreign language training at DLIFLC and possess unique skills with political, cultural, sociological, economic, and geographic awareness of the nations they study. These highly trained individuals will go on to receive Master degrees in their field of expertise and serve as defense attaches, political-military advisors,  and occupy positions at the Joint Staff, major Combatant Commands and Department of Defense.

“Build partner capacity in support of U.S. goals and objectives,” recommended Hooper. “The reason you are being trained to do what you do is to assist our partners in creating a security environment that is favorable to U.S. interests.”

Hooper also recommended that one of the most important aspects of being a FAO is the ability to analyze a particular situation through the understanding of the people of the target nation. “Understand the role of history in shaping culture and language as a reflection of that culture. That is the principal force of language. It is a reflection, “he said. “(You need to know) what motivates your host nation, what will sway or deter them or what will offend them.”

The two star general gave FAOs valuable advice about how to manger their career.  “Be yourself,” he said. “In the beginning, I tried to be like my boss and failed miserably.” But as soon as he started doing things “his way,” he said his career began to take off.

Other participants in the four-day program included Col. (P) Joseph Clark, deputy director of strategy plans and policy office of the deputy chief of staff G/3/5/7 and Brig. Gen. Matthew L. Brand who is currently assigned as the Deputy Chief of Staff for Strategic Plans and Policy, Headquarters Supreme Allied Command Transformation, NATO.