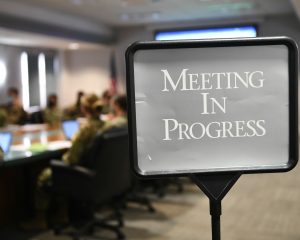 The Senate is “a venue and a platform for the free exchange of ideas, concerns and solutions in regard to daily student life here at DLI,” said Army Spec. Freddy Toscano, interim Student Senate president and DLIFLC student.

“As far as I know, this is the first time DLI has actually made or moved forward with standing up a student-run counsel,” said Maj. Morgan Borders, dean of students at DLIFLC and advisor to the Senate. “You have these people that are essentially your go-to [people] who can funnel ideas.” She added, “They also have a real time pulse of what’s going on in their classroom, in their departments, in that language. That’s a resource that can’t be bought.”

The Student Senate was a project that started with Col. Gary Hausman, the former commandant of DLIFLC. It began before the pandemic, but, as Borders says, it went “dormant” as COVID-19 raged. It wasn’t until the beginning of 2021 that the window of opportunity opened up and things moved forward in earnest.

At first glance, this might seem like just one more committee, but Borders explained how integral it is to hear from the students, beyond the six month and final surveys all students do.

“We have plenty of opportunity for student feedback but it’s almost too late,” Borders said. “They’re giving feedback in the middle of their course and at the end. And while we review [their responses], nine out of 10, we can help the next class, but we can’t fix what was reported because it happened months ago. Or, [it] was a great idea I wish we had known about then.” 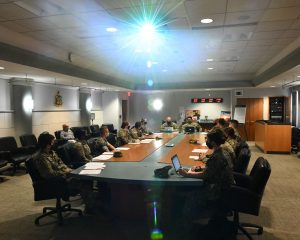 The 16 students, two service members from each schoolhouse, represent their peers in the collective student body, and will present findings, feedback and recommendations to the DLIFLC civilian and military leadership.

During an informal meeting with outgoing commandant Col. Hausman and the new commandant, Col. James Kievit in June 2021, Kievit talked to the Student Senate about the importance of having multiple channels of communication.

“Everybody has played the game of telephone,” he said. “The message doesn’t always reach the other end the way it started out. This helps us not talk past each other and communicate more effectively,” Kievit said.

On top of that, Toscano says, this is an opportunity for the students to shine and grow in leadership.

“We can do so much between the schoolhouse and our units and still be able to create future leaders,” he said. “I think that’s one of the things that will come out of [the Student Senate].”